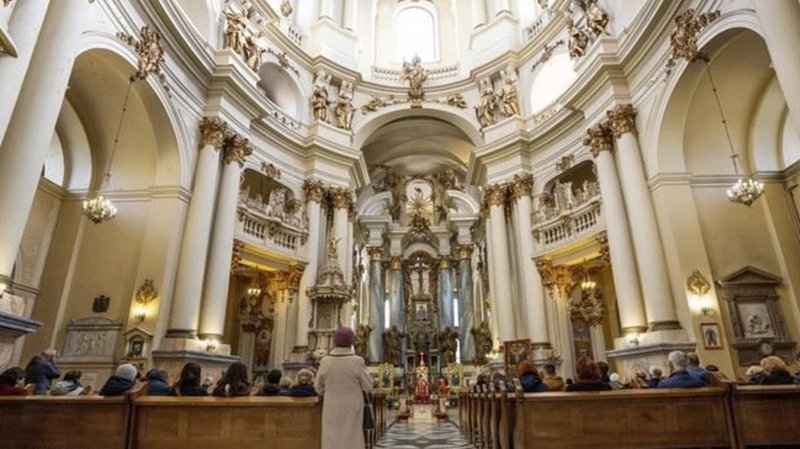 Russia has long demanded that Ukraine drop any hope of joining the western NATO alliance, which Moscow sees as a threat. Zelenskyy said that the question of neutrality, which would keep Ukraine out of NATO or other military alliances, should be put to Ukrainian voters in a referendum after Russian troops withdraw.

“We must come to an agreement with the president of the Russian Federation, and in order to reach an agreement, he needs to get out of there on his own feet … and come to meet me,” he said in an interview that Russia barred its media from publishing.

In an overnight video address to his nation, Zelenskyy said Ukraine sought peace “without delay” in talks due to get underway this week in Turkey.

President Recep Tayyip Erdogan’s office said the Turkish leader spoke to Russian President Vladimir Putin on Sunday, and that the two agreed the next meeting between Russian and Ukrainian officials should be held in Istanbul.

Turkish media report the two teams are expected to arrive Monday afternoon, with talks likely to start in full on Tuesday.

Earlier negotiations, both by video and in person, have failed to make progress on ending a more than month-old war that has killed thousands, driven more than 10 million Ukrainians from their homes — including almost 4 million from their country.

While the war continues to take an enormous toll, Russia’s offensive has stalled in many areas. Its aim to quickly encircle the capital, Kyiv, and force its surrender has faltered against staunch Ukrainian resistance — bolstered by weapons from the U.S. and other Western allies.

But Zelenskyy has made increasingly exasperated pleas for Western countries to do more, including sending fighter jets, accusing political leaders on Sunday of lacking courage. Countries from the NATO alliance have been hesitant to give Zelenskyy some of the more powerful equipment he’s begged for, for fear of triggering a much wider war.

In fact, Russia’s invasion has most Americans at least somewhat worried that the U.S. will be drawn directly into the conflict and could be targeted with nuclear weapons, according to a new poll from The Associated Press-NORC Center for Public Affairs Research. It shows a level of anxiety echoing the Cold War era.

Moscow now says its focus is on securing the entire eastern Donbas region, which has been partially controlled by Russia-backed separatists since 2014. A high-ranking Russian military official on Friday said that troops were being redirected to the east from other parts of the country.

Kyrylo Budanov, the head of Ukrainian military intelligence, accused Russia of seeking to split Ukraine in two, making the comparison to North and South Korea.

“The occupiers will try to pull the occupied territories into a single quasi-state structure and pit it against independent Ukraine,” Budanov said in a statement released by the Defense Ministry. He predicted that guerrilla warfare by Ukrainians would derail such plans.

Ukraine has banned reporting on troop and equipment movements not announced or approved by the military. Journalists who violate the law could face three to eight years in prison. The law does not differentiate between Ukrainian and foreign reporters.

On the road to Kyiv, residents of a village combed through the wreckage of Russia’s ongoing attacks. Locals in Byshiv, about 22 miles (35 kilometers) from Kyiv, walked through buildings torn open and destroyed by shelling to salvage what they could, including books, shelving and framed pictures.

Standing in what used to be a kindergarten classroom, teacher Svetlana Grybovska said too many children have fallen victim.

“It’s not right” Grybovska told British broadcaster Sky News. “Children are not guilty of anything.”

Andrea Rosa in Kharkiv, Nebi Qena in Kyiv, Cara Anna in Lviv and Associated Press journalists around the world contributed to this report.