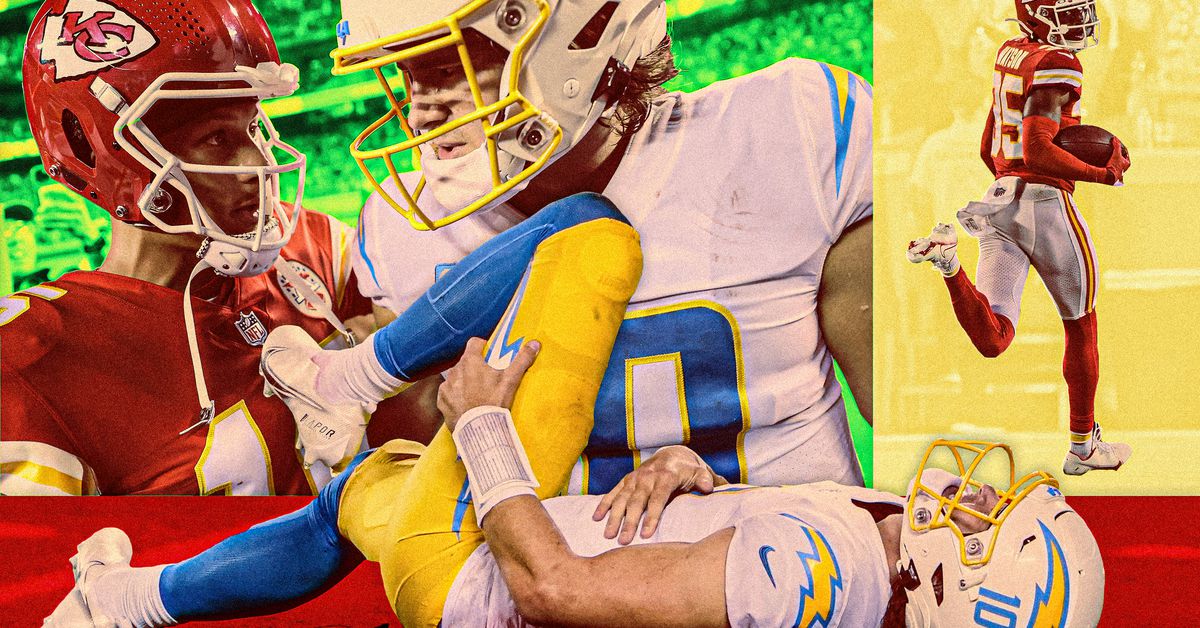 It was not clear if the big red splotch on Justin Herbert’s jersey was paint or blood. Herbert took a hit from Kansas City Chiefs defensive end Mike Danna and stayed down on the field, writhing in pain. Everybody watching channeled their inner Simba from The Lion King: “Come on Justin, you gotta get up….”

Herbert’s injury is being classified by Los Angeles Chargers head coach Brandon Staley as an abdominal or rib injury, which makes sense because it looked like Herbert’s kidneys had exploded.

Moments earlier, a somewhat lackluster Amazon Prime-exclusive Thursday Night Football debut between Herbert’s Chargers and Patrick Mahomes’s Chiefs seemed to finally be delivering on its hype. Herbert, the Chargers’ Prince Who Was Promised, got the ball down by seven points with just under six minutes to play. But then Herbert went down, went to the sideline for a play, and looked kaput when he came back in. On third-and-1 with just over two minutes left, Herbert pulled up limp, his left arm dangling at his side, and tossed the ball away rather than try to run a few yards for an easy first down. It was perhaps the saddest moment of his entire career.

Herbert immediately followed it up with perhaps the defining play of his career thus far: On fourth-and-1, Herbert delivered a ludicrous, otherworldly throw to DeAndre Carter for a 35-yard gain. Four plays later, Herbert threw a touchdown on fourth-and-goal from the 7-yard line. It turns out that the game did deliver at the very end of the promised three-hour window (classic Amazon).

The Chargers did not recover the ensuing onside kick and lost to the Chiefs, 27-24. But this game will likely be remembered more for Herbert refusing to lose than Kansas City and Mahomes pulling out a crucial AFC West win. Even with the game seemingly out of hand, Herbert launched a comeback that reminded everyone why we like watching sports. Los Angeles may have lost the battle, but Herbert reminded everyone how important he is to the war. And the question marks around Herbert’s health in the weeks and months to come will change the complexion of the AFC playoff race.

The entire game seesawed on a bizarre two-play sequence. With just over 11 minutes remaining in the fourth quarter, Herbert threw a pass to tight end Gerald Everett, who raced 26 yards until he was tackled at the Kansas City 3-yard line. Everett, clearly winded from the play, immediately motioned to the sideline for a substitution so he could get off the field. But the Chargers suddenly went into their no-huddle offense, and Everett stayed in for the next play. Herbert took the snap and targeted Everett, but either the throw was off, or Everett was not where Herbert expected him to be. Chiefs rookie cornerback Jaylen Watson intercepted the pass and took it 99 yards for a pick-six. The touchdown gave Kansas City a seven-point fourth-quarter lead. According to Amazon Prime’s win probability metrics, the play flipped the odds from the Chargers having a 69 percent chance to win the game (nice) to a 15 percent chance to win (not nice). It was the biggest swing in win probability after a pick-six in at least three seasons.

It’s the kind of small miscommunication that can upend a game, and for the Chargers, perhaps a division title race. But the Chargers also had larger problems that upended their night—and their quarterback. Right tackle Trey Pipkens left with an injury, making the weakest spot on their roster even weaker. Center Corey Linsley—a prized free agent acquisition in 2021 and a key member of their offense—also left with an injury. Once Linsley left, Herbert’s average pass length dropped by more than half, a sign of how much quicker he was getting the ball out. Almost immediately after Linsley’s injury, the Chiefs and defensive tackle Chris Jones began getting interior pressure, including a third-and-10 sack by Jones and later Danna delivering the clean but crushing hit on Herbert that left the quarterback crumpled. Herbert was pressured 18 times on Thursday, and the Chiefs got twice as many QB pressures in the second half as they did in the first half, according to Pro Football Focus. But early in the game, the Chargers were dominating—best captured by Derwin James suplexing Travis Kelce:

Chargers receiver Mike Williams finished with eight catches for 113 yards (84 of which came by halftime), plus one incredible touchdown. Herbert was without his no. 1 receiver, Keenan Allen, in this game; in their first 30 games together they’ve combined for 206 completions and 2,159 yards. But the 6-foot-4 Williams literally and figuratively stepped up to dominate KC’s smaller secondary, which was without rookie cornerback Trent McDuffie. Williams seemingly was turning 50-50 balls into an 80-20 proposition all night. The Chargers jumped to a 10-0 lead. But then Mahomes, well, he Mahomes’ed. His first touchdown of the night was a sidearm, cross-body throw mixed between The Matrix and the bullet curving in Wanted:

The throw is obviously what gets the attention, but what sets up the throw is the scramble. It’s Mahomes’s secret weapon, and it was Los Angeles’ main point of emphasis entering the game.

“The biggest thing you talk about is can we make him perform from the pocket and not extend plays,” Chargers defensive coordinator Renaldo Hill told reporters this week. “Because once he gets out the pocket, he’s a whole other animal.”

But Mahomes also diced Los Angeles up for his second touchdown by stepping up into the pocket and whipping the most effortless 45-yard throw you’ll ever see.

Take away those two plays, and the Chargers held Mahomes to 185 yards and zero touchdowns on 33 attempts, plus approximately seven passes that the Chargers nearly intercepted. (Officials overturned one Chargers interception in the third quarter, shortly before Mahomes’s touchdown pass to Justin Watson. Another Mahomes interception was negated on a strange illegal contact call early in the second quarter, which led to Kansas City’s first touchdown.) The Chargers defense actually played quite well and held the Chiefs to 2.83 yards per rush through three quarters. Kelce managed just 51 yards receiving for the game. But this is the experience of playing the Chiefs in a nutshell—give them three or four plays a game where you let up, and they will snatch your soul.

Staley kept the Chargers in the contest by going for it on fourth down three times on fourth-and-inches, and each time the Chargers converted and went on to score a touchdown. If anything, Staley might regret declining to go for it on fourth-and-2 multiple times. Meanwhile, Andy Reid decided to kick a field goal on fourth-and-1 from the 1-yard line to tie the game at 17—a decision that might have been far more heavily criticized had the Chargers punched in a touchdown from the 3-yard line on their next drive instead of throwing a pick-six. For all of L.A.’s blemishes, Staley’s coaching kept them in this game minus that one catastrophic mistake.

But nothing keeps the Chargers in games like Herbert. Last year’s regular season ended with Herbert converting five fourth-down conversions in the final five minutes of a Week 18 thriller against the Raiders—including two fourth-and-10s and a fourth-and-21. Thursday night, Herbert may have topped that performance by converting the two fourth downs into 43 combined yards and a score. More importantly, he came up clutch on those fourth downs so late in the game, when many wondered why he was even playing at all.

The Chargers are now 1-1, and with the head-to head tiebreaker now effectively two games behind the 2-0 Chiefs, who are in first place in the AFC West for the seventh consecutive season. The nature of Herbert’s injury will be crucial to the playoff race. If Herbert has a rib injury, it could linger all season, and could get worse with every hit or sack. No offense to backup Chase Daniel, but the Chargers have little shot of going anywhere without Herbert running this show. Many here at The Ringer and elsewhere were penciling in the Chargers for a wild card spot, if not the AFC West division crown. But with the Broncos lurking in the division, the Dolphins 1-0 in the AFC East, and three AFC North teams at 1-0 (plus the Bengals!), the Chargers are in danger of missing the playoffs altogether if Herbert has to miss any extended time—either now, or if the injury worsens down the road.

It would be hard to watch the Chargers flail if Herbert misses time. But it will also be hard to not watch Herbert play in primetime ever again this season.

The red splotch on Herbert’s jersey turned out to be paint, not blood. Even so, Herbert’s injury proved to everybody—a bit too literally—that the kid has guts.