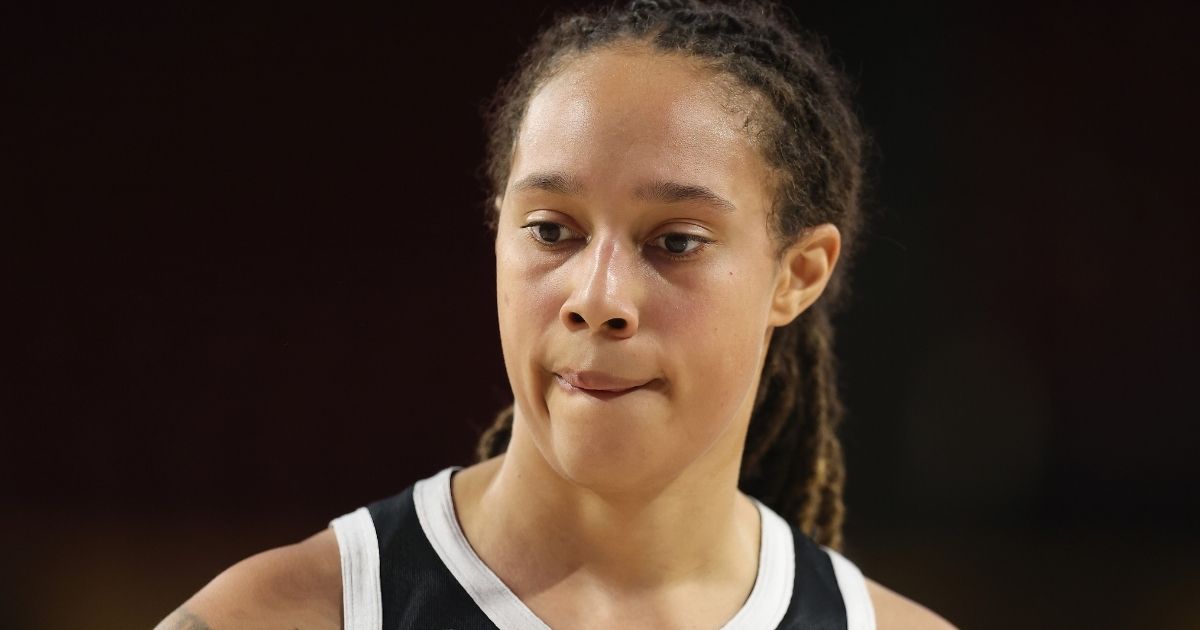 There are many reasons one could plausibly posit for why American basketball star Brittney Griner found herself in Russian detention. One of them isn’t the gender pay gap in the United States.

And yet, posit it one MSNBC writer did.

(This is one of the more ridiculous cases being made to play up the gender pay gap on the left, but it’s hardly the only one. Here at The Western Journal, we’ve noted how most of these cases rely on inaccurate data and confirmation bias. We’ll keep bringing America the truth — and you can help us by subscribing.)

In case you’re not up to speed, the case is indeed an alarming and sad one: Griner, a center for the Phoenix Mercury, is being detained in Russia after she was arrested earlier this month at Moscow’s Sheremetyevo Airport.

Russian officials said she tried to leave the country with vape cartridges filled with hashish oil. However, the case seems dodgy for the obvious reason that Griner automatically becomes the highest-profile American in Russian custody and it seems profoundly counterintuitive that any high-profile U.S. citizen who’d been anywhere near a television since the Russian invasion of Ukraine in February would try to smuggle drugs through airport security in Moscow.

Most of the questions over Griner’s detention have revolved around how Vladimir Putin’s regime would treat the 6-foot-9 basketball star and whether she would be used as a political pawn.

However, Zirin has seemed particularly determined to make Griner his political pawn.

Last week, he wrote in his column for lefty rag The Nation that we needed to realize Griner wasn’t in custody “because of the racist war on drugs” but was a “political prisoner” and that she is “a Black, queer, athletic superstar, and that is partly why she is being disregarded by so much of the US sports media.”

Not content with that, Zirin used his column in The Nation this week to argue the GOP was trying to “erase” Griner because of “white nationalism” (natch!) or because of WNBA “players’ history of tilting the entire US Senate in 2020 by backing the Rev. Raphael Warnock in his race against Republican white nationalist and WNBA franchise owner Kelly Loeffler.”

Judging by the fact that last claim made it through to the final revision of the article, I’d say a) Zirin’s editor was on vacation this week and/or b) Zirin mistakenly thinks Lin Wood is a WNBA player.

But I digress, because that wasn’t even the most outré thing Zirin wrote about Griner since last week.

Instead, that would be his MSNBC piece — where, instead of the “racist war on drugs” or “white nationalism,” he blamed unequal pay for Griner’s plight.

“While Griner’s detention has received a measure of media attention, the fact that she was in Russia in the first place demands its own examination,” Zirin wrote. “Besides playing for the Phoenix Mercury, the 6’9” Griner is a basketball titan overseas, where she plays for the Russian league UMMC Ekaterinburg in the WNBA offseason.

“In 2021, she helped the Russian team win its fifth EuroLeague Women’s championship. Like most professional women’s players, who make a microcosmic fraction of what the men make in the NBA, this kind of international play is essential for supplementing their income.”

“Brittney’s detainment in Russia also once again shines the spotlight on an unfortunate truth: that the vast majority of WNBA players earn their living overseas,” Sue Hovey, a former executive editor for ESPN and co-author of Griner’s memoir, “In My Skin,” told Zirin by email.

“A lot of casual sports fans still don’t know this, which kind of blows my mind,” Hovey wrote. “But that just shows you how much more work needs to be done when it comes to raising awareness around equity issues in women’s sports.”

Well, for starters, the WNBA itself makes only $60 million in revenue a year, according to the Salt Lake City Deseret News. The NBA, meanwhile, rakes in $7.92 billion a year — over 100 times more than the WNBA does. While Zirin doesn’t acknowledge how great the disparity is, he acknowledges it exists, along with a series of other facts that seem to indicate his MSNBC editor was taking the week off, too.

As he noted, places where WNBA players can make significant money playing in the offseason are “often in autocratic societies such as Russia, Turkey and China, where the love for women’s basketball can hold a fevered — and profitable — intensity.”

In the United States, meanwhile, the WNBA isn’t exactly that popular. Consider that when the Chicago Sky beat Griner’s Mercury in Game 4 of last year’s WNBA Finals to capture its first title, CNBC reported the game was watched by a paltry 417,000 viewers. And yet this was, Sports Pro Media noted, the most viewed postseason the WNBA had since 2014.

Meanwhile, Game 6 of last year’s NBA Finals between the Milwaukee Bucks and the Phoenix Suns drew 12.5 million viewers — a significant decrease from the 18.3 million who watched Game 6 of the Toronto Raptors-Golden State Warriors series in 2019, the last pre-pandemic Finals. (The 2020 series took a significant hit in viewership, but this happened with most pro sports.) In 2015, 23.3 million watched Game 6 of the Warriors-Cleveland Cavaliers Finals.

And it’s not necessarily as if salaries overseas are driven by demand, as Zirin himself freely admitted.

“Unlike the WNBA, there is no salary cap or collective bargaining. Teams (not unlike the United States) are often owned by oligarchs who can afford to spring for the best talent because bragging rights between the mega-rich can mean more than profit margins. The great [Diana] Taurasi missed the entire 2015 WNBA season to honor a contract with a Russian league.”

So the only reason Griner and others are getting paid massive amounts of money to play in autocratic regimes is that the oligarchs who have been made fat off those regimes are willing to blow a massive amount of cash — above what the market would bear, anyway — for “bragging rights.” (And it’s worth noting WNBA players aren’t necessarily impoverished; Griner earns over $200,000 a year in base salary, meaning she’s hardly poor. They’re just not mega-rich like some of their NBA counterparts.)

So the sport isn’t terribly popular in the United States, and the money players earn overseas is in excess of what they’d be worth normally because oligarchs like winning more than they like profitability. What’s Zirin’s excuse here?

It’s all about making things difficult on Russia or helping out the Ukrainian war effort. I think.

“Whether we are talking about oil or women’s basketball, the question comes down to what we, a country of 300 million people, are willing to support and what we are willing to sacrifice,” Zirin wrote, arguing WNBA “players will be safer and happier and better rested if they could stay home, but that would require a robust investment and a supercharged marketing scheme to appeal more to consumers,” as well as higher ticket prices.

“Prior to Russia’s invasion of Ukraine, the U.S. had been happy to get cheap Russian oil as much as the WNBA was fine with seeing the comparatively meager salaries of their players subsidized by traveling overseas,” he said. “Now that the global climate has changed, it’s time to restructure our economic decisions and investments.

“It’s time for the league to step up for the safety and security of its players, without simply passing the costs onto fans. Let franchise owners, our own homegrown oligarchs, sacrifice for once and make being in the WNBA a year-round job.”

This is mind-blowingly bad logic.

Unlike oil, women’s basketball isn’t a necessity. Like all sports, it’s a luxury, and one Americans are profoundly unwilling to watch, much less to attend at higher prices.

Those “homegrown oligarchs” who own the teams would promptly sell or abandon them if they were forced to turn the WNBA into a patronage program for female basketball players so they can “be safer and happier and better rested.”

But then, this is hardly the point. Brittney Griner is at the forefront of our collective attention right now and Dave Zirin is going to keep on using her to push his agenda items, regardless of whether the logic works out or not.

Never mind that Griner decided to play in Russia by her own free will — and while earning six times more than the U.S. individual median income while playing in the WNBA, mind you. She’s a victim of gender pay equity because she’s not earning mega-bucks like an NBA player does and WNBA owners can’t afford to pay her the same amount an oligarch who doesn’t care about turning a profit can.

Look out for Zirin’s column next week, in which one can only assume he will argue Griner’s detention is proof the Electoral College should be abolished.

C. Douglas Golden is a writer who splits his time between the United States and Southeast Asia. Specializing in political commentary and world affairs, he’s written for Conservative Tribune and The Western Journal since 2014.

C. Douglas Golden is a writer who splits his time between the United States and Southeast Asia. Specializing in political commentary and world affairs, he’s written for Conservative Tribune and The Western Journal since 2014. Aside from politics, he enjoys spending time with his wife, literature (especially British comic novels and modern Japanese lit), indie rock, coffee, Formula One and football (of both American and world varieties).