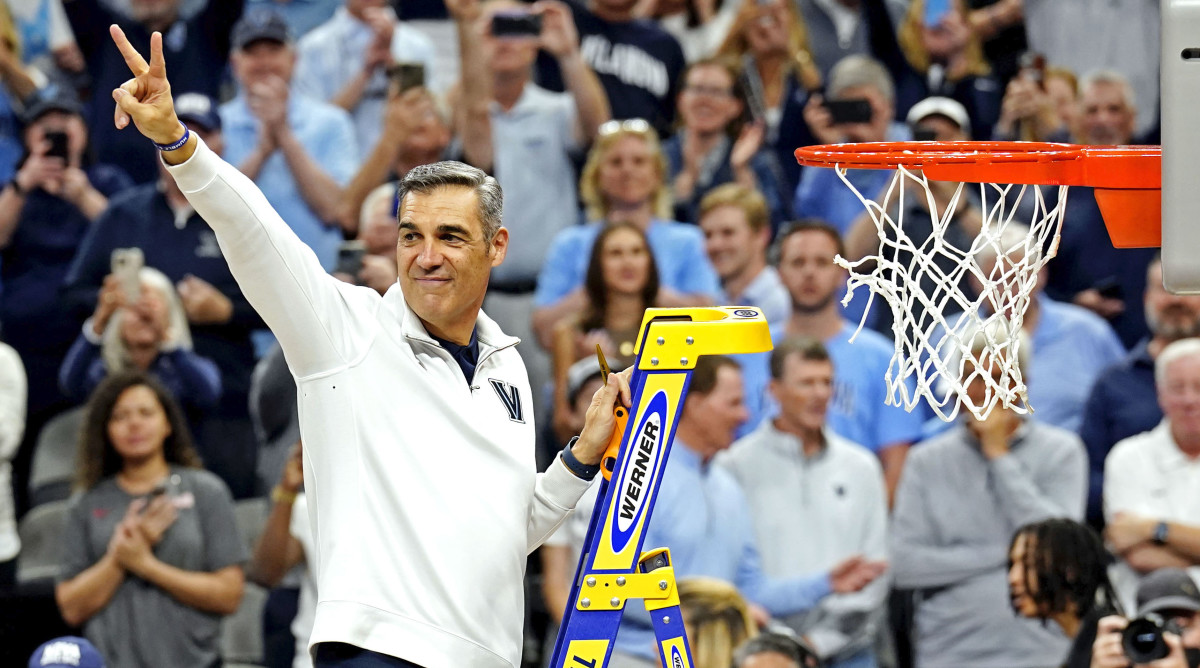 The March Madness battle between Villanova and Kansas features a Wildcats team aiming for their third National Championship in the past six tournaments and a Jayhawks squad boasting the winningest program in Division I men’s college basketball (2,355 victories).

The Big 12 Champion Jayhawks, who have overtaken Kentucky by two victories on the all-time win list, have their eyes focused on earning their first national title since 2008.

Big East Champion Villanova, the winningest team (20-3) in the men’s NCAA tournament since 2016, are pursuing a fourth championship to bring home to the Main Line.

No. 2 Villanova Wildcats vs. No. 1 Kansas Jayhawks

The line has ticked up since the opener, displaying No. 1 Kansas as 4-point favorites over No. 2 Villanova to a 4.5-point demand at SI Sportsbook. The line move mostly involves public steam following the announcement that Villanova’s second-leading scorer Justin Moore (Achilles) has been lost for the season.

How Did We Get Here?

Kansas, who also owns a nine-game winning streak, have rewarded bettors over that span by posting a 6-3 ATS mark. However, in the tournament, the Jayhawks have a mediocre 2-2 ATS mark. Kansas crushed Texas Southern, 83-56, as 21.5-point favorites in the first round, but then struggled with two Big East opponents. The Jayhawks slipped by Creighton, 79-72, but failed to cover 13.5-point favorites in the second round and then did just enough to move past Providence 66-61 in the Sweet 16, but failed to once again cover the 7.5-point spread. In the Elite Eight, Kansas used a dominant second-half performance to blow out Miami 76-50 as 6-point favorites.

Will History Repeat Itself?

Villanova and Kansas will be meeting in the NCAA tournament for the third time since 2008. These two Blue Blood programs met in the Final Four in 2018, the Elite Eight in 2016 and in the Sweet 16 in 2008. The Wildcats are 2-0 both SU and ATS in the two most recent tournament meetings, while the Jayhawks won and covered in a 72-57 win as 12-point favorites in 2008. The interesting item of note to take away here is that the winner of each of these three matchups has eventually emerged as National Champions.

The Big 12 Champions are led by leading scorer Ochai Agbaji (18.9 ppg), but the star guard who is shooting 39.8% from deep on the season, has surprisingly struggled to find his stroke from the outside in the NCAA tournament hitting just 4 of 20 (20.0%) from beyond the arc. The sharpshooting senior had his best game of the tournament in the win over the Hurricanes filling up the box score with 18 points, five rebounds, four assists and four steals.

Senior Arizona State transfer Remy Martin has been outstanding in the role of “Sixth Man” off the bench for Bill Self’s squad in the men’s NCAA tournament averaging 16.8 points, 5.3 rebounds and 3.3 assists. His production is a big factor why Kansas is playing in the Final Four for the first time since 2018.

Kansas’ David McCormack, who is averaging 9.8 points and 4.8 rebounds per game, is the emotional leader for the Jayhawks. The senior big man, who has been battling foot issues, scored double-digits (15) for the first time in this year’s NCAA tournament in just 18 minutes against Miami. His dominant production early in the second half kickstarted a second-half outburst where the Jayhawks outscored the Hurricanes 47-15 en route to a 26-point blowout victory.

Sophomore Jalen Wilson, who has produced two double-doubles in the tournament, has been sensational on the boards averaging a team-high 10.5 rebounds in Kansas’ four wins entering the Final Four. The versatile forward has struggled from three-point range hitting a paltry 2 of 14 attempts (14%).

The euphoria of a third trip to the Final Four in the last six tournaments, instantly came to a halt when Villanova learned that second-leading scorer Justin Moore (14.8 ppg) had suffered a torn Achilles in the final seconds of the Elite Eight victory over Houston.

Jay Wright is on the record as calling Moore Villanova’s “most important player” not only due to his leadership and scoring but more for his ability to guard four positions on the defensive end of the court. The loss of Moore will clearly hurt an already thin Villanova rotation which has been operating primarily only six-deep for the majority of the season.

Jermaine Samuels, who was named the Most Outstanding Player (MOP) of the South Region after averaging 17.5 points and 8.5 rebounds, has become the latest talent to become a star in Wright’s program. In the team’s win over Houston, Samuels scored a game-high 16 points while grabbing 10 rebounds. The versatile senior is the Wildcats best two-way player and will be tasked with the assignment of keeping one of the best rebounding teams in the country off the glass, while also picking up more of the scoring load following Moore’s injury.

The Wildcats, who are 14-1 SU in their last 15 games, possess arguably the best point guard in the country in Big East Player of the Year Colin Gillispie (15.6 ppg). The fifth-year senior proved yet again why he is one of Villanova’s best clutch players during their Elite Eight matchup against Houston. With 5:15  left on the clock and  Villanova’s lead shrinking to just 42-40, Gillespie crossed over J’Wan Roberts and buried an elbow jumper when the Wildcats were desperate for a basket.

With Moore going down, Caleb Daniels (10.2 ppg) will move into the starting lineup and will be looked upon to fill the scoring void in conjunction with Brandon Slater (8.3 ppg). Daniels has thrived in the role of Sixth Man in the tournament averaging 11.0 points and 6.3 rebounds, but now will also be tasked with the defensive assignment of slowing down Agbaji. On the flip side, Slater has struggled immensely scoring just five total points in the tournament, despite averaging 26 minutes per game. Hitting only one-of-11 shots from the field appears to have stripped Slater of his confidence. Villanova needs Slater to display the form he showed in February when he scored in double-digits in seven consecutive games.

With Bill Self likely formulating a defensive plan that involves limiting the looks for Gillispie and Samuels, Villanova will need solid production from emerging big-man Eric Dixon. The sophomore, who has shot 4-of-6 (67%) from beyond the arc in the tournament, will need to produce from the outside to draw McCormack away from the paint and open up the lane. With a limited rotation, Dixon will need to stay out of foul trouble as he will likely be asked to play 30-plus minutes on Saturday.

The Wildcats are on the cusp of becoming the best free-throw (82.5%) shooting team in NCAA history. In the club’s Elite Eight win over Houston, the Wildcats were a perfect 15-of-15 from the charity stripe. In their four tournament wins, Villanova is actually ahead of their record-setting pace, converting 53-of-59 (89.8%) from the line.

On the flip side, Kansas has struggled from the free-throw line ranking 180th in the country shooting at a 71.5% on the season. In the tournament, the Jayhawks have converted just 56-of-83 (67.5%) attempts from the line.

If this game is close at the end, Villanova has the clear edge in free throw accuracy.

In the Elite Eight, Villanova suffocated Houston from the perimeter, holding the Cougars to a dismal 1-of-20 (5%) from beyond the arc. Throughout March Madness, Wright’s defensive game plans have held opponents to just 17-of-80 (21.3%) from deep. But Kansas, who has hit 24-of-67 (35.8%) from deep in the tournament, are the best shooting team Villanova has faced in March. On the flip side, the Jayhawks have also been superb on the defensive end on the perimeter holding opponents to just 22-of-86 (25.6%) from the outside.

As we see every year free-throw shooting is often the difference between winning or losing close games. The loss of Moore can not be understated, but with a full week to prepare it is hard not to grab the points with the Wildcats.

Covering the spread at an 83% clip has led to sharp bettors unwilling to bet against a Hall of Fame coach armed with the talents of Gillispie and Samuels. If early steam is any indication, Kansas, which is receiving 84% of public money, will only become larger favorites by tip-off on Saturday night. Wait and grab the best number on Saturday.

Check Out the Latest Odds at SI Sportsbook

Frankie Taddeo is a successful high-stakes fantasy football player who created the first-ever DFS program ever offered in a Las Vegas sportsbook. Frankie is SI Betting’s Senior Analyst and provides his significant experience and resources in the sports betting scene. You can follow Frankie on Twitter @Frankie_Fantasy for his latest betting and fantasy insights from Las Vegas.