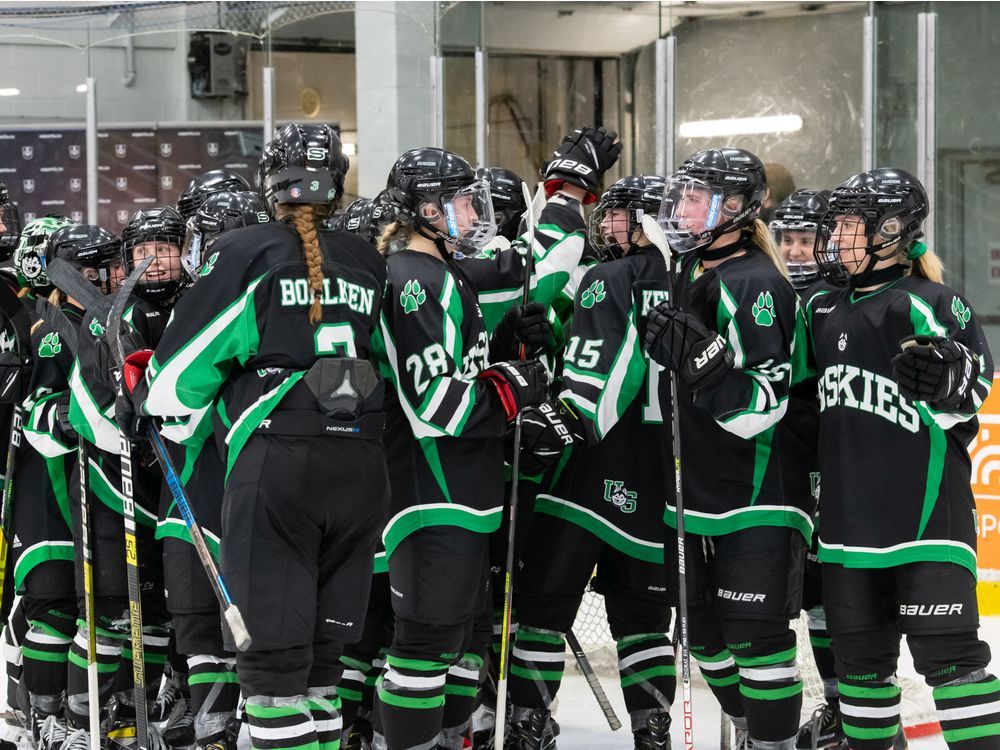 “It’s huge for us but I think we need to look at it game by game — we can’t settle with this.”

The University of Saskatchewan Huskies are moving on.

With goals from four different players and a 27-save shutout performance by Camryn Drever, the Huskies blanked the Brock University Badgers 4-0 in U Sports women’s hockey national championship quarter-final play Friday in Charlottetown, P.E.I.

“This is the one we needed to win,” said U of S coach Steve Kook. “You get on the wrong side of the draw here and you’re not playing for anything meaningful. This at least gives us a chance to play for a medal.”

Brock came in as the Ontario University Athletics champion and the tournament’s No. 4 seed.

Win or lose, the Huskies will play for a medal on Sunday.

“Just having that the momentum from the first game is huge,” said Huskies forward Kara Kondrat, who gave her team a commanding 3-0 lead early in the third period.

“Knowing that we’re playing for a medal is unreal.”

After giving up the first seven shots while playing shorthanded through the opening five minutes, Saskatchewan went on to out-shoot Brock 33-27.

“We didn’t draw up a plan to kill (penalties) for the first four minutes of the game,” said Kook. “But, maybe in hindsight, that was a good thing. It calmed us and settled us down a little bit.

“I didn’t think we were nervous at all. We had a lot of energy. We got a hooking penalty, a tripping penalty. It wasn’t a penalty where we were behind or getting in wrong spots. We were just being active.”

Kondrat, Sara Kendall, Brooklyn Stevely, Kara Kondrat and Nicole Fry each scored once for the Huskies, who carried a 1-0 lead into the third period.

“It feels really good right now,” said Kondrat. “It’s huge for us but I think we need to look at it game by game — we can’t settle with this.”

After a scary moment when Huskies forward Jordyn Holmes crashed into the end boards with an undetermined injury, Kendall got her team on the board when she jammed in the puck inside the post from behind the net.

“Once we had that injury with Jordyn Holmes, we really sat together and said ‘Let’s do this for her,’ “ noted Kondrat. “We’re a very hard-working team and that is essentially what got us here. We all have different traits that we bring.

“It’s a very good atmosphere (on the team) and we can show that with our game.”

Stevely scored with a wrist shot from atop the faceoff circle. Kondrat squeezed in a shot through the five-hole from the right side to make it 3-0.

Fry rounded out the scoring with an empty-netter.

DOG TALES: Holmes, a third-year Huskies forward whose sister Emily also plays on the team, was taken to hospital in Charlottetown for further testing after being carried off the ice.