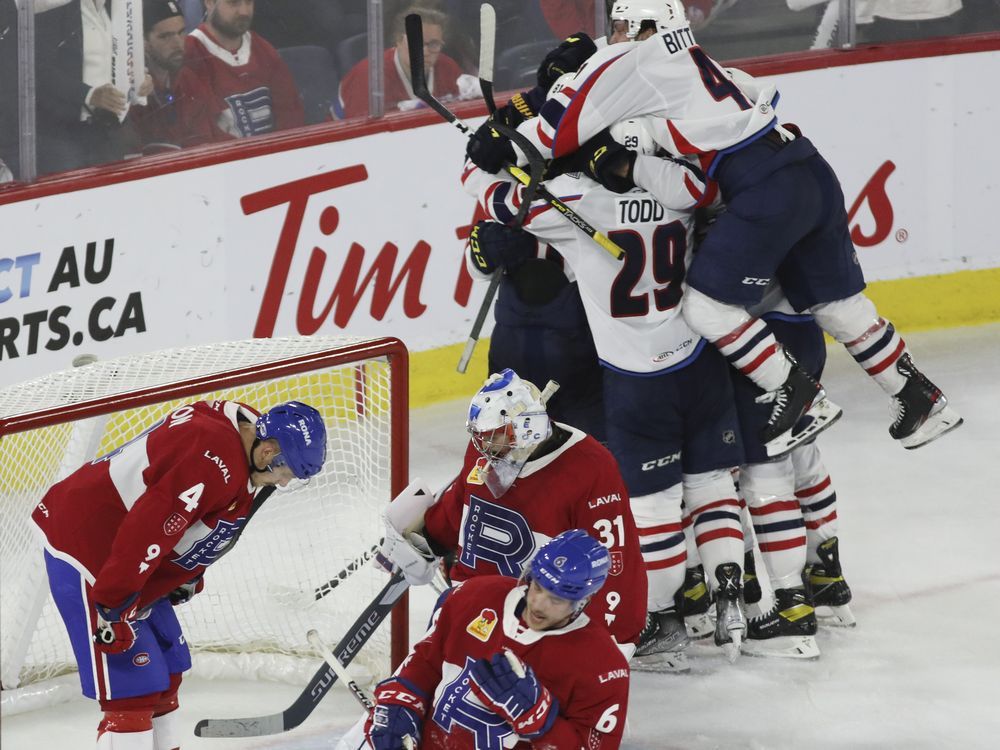 We apologize, but this video has failed to load.

The win gave Springfield a 3-2 lead in the Calder Cup Eastern Conference final. Game 6 will be on Monday at MassMutual Center (7 p.m., RDS, 91.9 FM). If a Game 7 is necessary, it will be played in Springfield on Wednesday.

Neal scored on a shot from the slot to spoil a strong performance from goalie Cayden Primeau, who finished with 44 saves.

Dakota Joshua sent the teams into overtime for the second consecutive night when he beat Primeau with a knuckleball with 4:24 remaining in regulation time.

The win spared Springfield coach Drew Bannister a round of second-guessing about his choice of a starting goaltender.

While the Rocket has been riding Primeau since the second game of the playoffs — he made his 12th consecutive start Saturday —  Bannister has divided the work between Joel Hofer and former Canadien Charlie Lindgren, who got the call Saturday.

He went with Lindgren over Hofer, who has a 6-1 record in the playoffs with a 1.80 goals-against average and a .955 save percentage, and the veteran responded with a solid performance.

Springfield’s Nikita Alexandrov hit a rough patch midway through the first period. He was stopped by Primeau on a breakaway seconds after  the Thunderbirds killed a penalty for having too many men on the ice. Alexandrov showed his frustration by picking up a slashing penalty and the Rocket capitalized when Rafaël Harvey-Pinard scored a power-play goal at 11:32.

All 7 Photos for Gallery

Full Screen is not supported on this browser version.

You may use a different browser or device to view this in full screen.

Harvey-Pinard, who is all of 5-foot-9, established position in front of the net and was rewarded when he deflected Sami Niku’s shot from the blue line.

Harvey-Pinard made it 2-0 when he got the bounce in the second period. His shot from the left side went through the crease and appeared to go in off Springfield defenceman Brady Lyle. Harvey-Pinard, who scored the overtime winner in the Rocket’s 3-2 win in Game 4 on Friday, has five goals in the playoffs and all of them have been scored against Springfield.

The Rocket penalty-kill made another significant contribution in keeping the game close. Springfield went 0-for-7 on the power play and is 0-for-25 in the series. The Rocket has killed 29 consecutive power plays going back to the North Division final against Rochester.

There were a couple of  lineup changes for the Rocket. Jean-François Houle reverted to a conventional 12-forward, six-defenceman alignment, replacing defenceman Gianni Fairbrother with Jean-Christophe Beaudin, while Kevin Roy subbed in for Nate Schnarr.

More On This Topic