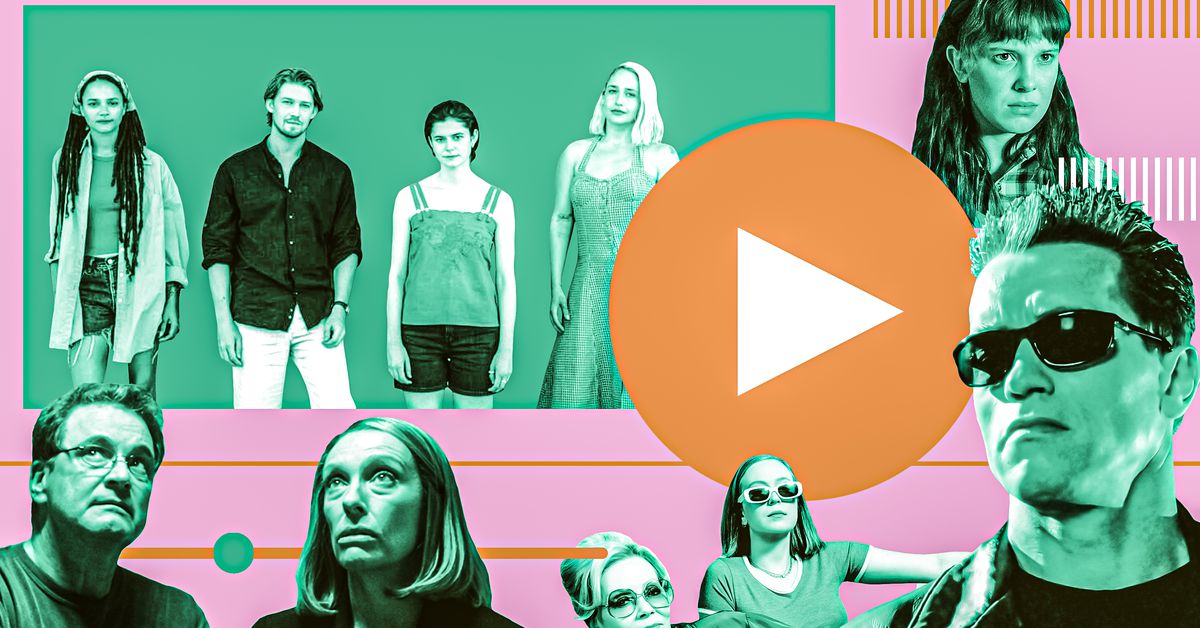 OK, so here’s the TV-watching plan for May: catch up on the 400 marquee series (approximate number) that dropped near the end of April and then hunker down. The first couple weeks of this upcoming month offer a mercifully small number of must-watch shows … but that’s just the calm before the storm. By the end of the month, two of the biggest releases on the calendar will have premiered on the same day. So get ready while you can. And use this guide as a helper, if you want …

What’s New to Streaming in March

A selected list of movies and TV shows coming this month that The Ringer is very excited about.

Alan Siegel: The juxtaposition of warmth and spectacle is what elevates Terminator 2 above nearly all other ’90s popcorn flicks. But that somehow undersells its appeal and influence. Industrial Light & Magic’s cutting-edge visual effects, a Kevlar-tough woman as the lead, dozens of memorable one-liners, and terrifyingly prescient themes combined to form a blockbuster that pushed the limits of the medium. The top-grossing movie of 1991 escalated a big-screen arms race that’s played out in American cineplexes every summer since.

Shea Serrano: Part of what makes The Circle so great is how despite early assumptions that a show like this would lean into the idea that the loneliness heavy internet users might feel has been baked into their bones, it somehow does the opposite. Once the novelty wears off several episodes in, everything and everyone begins to feel ultra-humanized. The isolation somehow begins mushing people together through their TV screens. It’s incredible to watch happen. There are of course fun and funny moments on the episodes that speed the show forward (the guy pretending to be a woman, for example, is routinely invited into woman-only chats, and every single time he gets invited in he’s two or three sentences away from tipping his hand), but there are also big philosophical moments that ground everything in a I Wasn’t Expecting This Water to Get So Deep way. Watching a catfish having to process why they’ve chosen to catfish feels like peeking inside someone’s diary.

The Staircase (May 5, HBO Max)

Andrew Gruttadaro: After winning an Academy Award for his 2001 HBO documentary Murder on a Sunday Morning, Jean-Xavier de Lestrade decided to tell the other side of the story. Murder had followed the story of Brenton Butler, a Black, lower-class 15-year-old who had been wrongfully accused of murder; de Lestrade still wanted to examine the American criminal justice system, specifically in relation to murder trials, but this time through the lens of a white person, one wealthy enough to be able to afford the best defense possible. He and his team started reviewing cases that fit the criteria, and after 300 cases and about five months of research, they found Michael Peterson.

Alison Herman: Like all good themes, Girls5Eva’s is a perfect capsule of the show it introduces. Deceptively silly and loose, the tune also has an airtight grip on its satirical subject: late-’90s girl groups and what happens to their members, and all women in show business, when they reach middle age. A Spice Girls–type quintet who peaked in the last millennium, Girls5Eva gets an unexpected boost when their biggest (read: only) hit is sampled by the Gen Z rapper Lil Stinker. Sensing opportunity, the surviving members of the group—the “fun one” swam off the edge of an infinity pool back in the aughts—resolve to turn their second wind into a full-fledged comeback.

Randall Coburn: The Challenge: All Stars is a spinoff of MTV’s resilient competition series. It reunites the show’s bygone stars for a game that reflects the franchise’s latter-day evolution from oceanside romp to honest-to-goodness athletic contest. (Seriously, the grueling cardio and gut-dropping psych-outs of today’s Challenges barely resemble those bygone beach games.) But it also has larger significance: The series is an indicator of MTV’s strategy on the nascent streamer, which last year rose from the ashes of CBS All Access after CBS merged with Viacom, MTV’s parent company. The raucous bundle of viral fail videos that is Rob Dyrdek’s Ridiculousness continues to consume the network’s airwaves, so MTV appears to be using Paramount+ to win back the Gen X and millennial audiences it lost in its efforts to woo younger generations.

Herman: Hacks isn’t just a two-hander. It’s also a study in the strange bubble that sets in around the rich and famous, from the workaholic business manager to the personal blackjack dealer to the jaded adult daughter. Jean Smart is the center of this hermetically sealed universe and rightly earned an Emmy for Season 1. Still, Hacks is a stealth ensemble, and a tribute to how much more goes into a legend’s career than one fabulous diva on a stage.

Conversations With Friends (May 15, Hulu)

Herman: Back in 2016, Stranger Things became a surprise sensation on the back of a compelling cast of child actors and the chemistry between them. About 10 seconds later, the series faced a roadblock that becomes inevitable for any franchise relying on a group of wildly popular kids: What happens when those kids grow up?


Some New-ish Things You Might’ve Missed

Because it’s hard to keep up with everything, here are a few things that have premiered somewhat recently that may be worth catching up on.

Derek Lawrence: Jason Bateman has helmed only two episodes since winning his Emmy, which opened the door for Laura Linney and House of Cards star Robin Wright to be among those to step behind the camera in Season 4. But he wasn’t going to miss the chance to return to the director’s chair for the finale and finish what he started. “The central questions that Chris [Mundy] and I posed to each other as we were thinking about how to end this thing were, ‘Should it be a cautionary tale? Should it be a victory? Should it be a failure? Do they get away with it, or do they not?’” he says. “There’s an obvious way to state whether they got away with it or not, and then there’s a more of an opaque way to communicate whether they get away with it or not.” Bateman pauses, carefully considers his words, and continues. “I don’t think it’s any spoiler to say that Chris and his gang stayed consistent in keeping things a bit opaque with what he leaves in everybody’s mind. As far as whether this is a win or a loss, I’ll leave it up to you to decide.”

We Own This City (HBO Max)

Adam Nayman: Michael Bay’s new thriller Ambulance is sold as a combined comeback-slash-throwback: a self-contained, non-IP, hard-R-rated action movie made for an actual studio instead of a streamer and released with a cheering movie theater audience in mind. With the exception of a couple of plot points involving FaceTime chat, the story—about a hijacked emergency vehicle perilously crossing L.A.’s various freeways—could have taken place in the mid-’90s; at one point, the characters even talk about The Rock, which isn’t just Bay being self-referential about his own 1996 breakthrough hit, but evincing a nostalgia that, in context, is almost touching.

Miles Surrey: Killing for hire and show business seems like an odd pairing, but Barry has expertly wedded these professions and the self-delusion required to navigate them successfully. Whether it’s a hitman with a history of turning to violence to solve all his problems thinking he can be absolved of his sins or a showrunner charging along with a series that stretches the truth of her history with abuse, Barry continues to shine a light on damaged characters who refuse to look at themselves in the mirror. The results haven’t been pretty going into Season 3, but as is true to Tinseltown, the show must go on.

Herman: When you manage to create a perfect closed loop, how do you open it back up again? And should you?

These are the questions that face existential explorer Nadia Vulvokov (Natasha Lyonne) in the second season of Russian Doll. They’re also the questions that face the show itself, with new episodes streaming on Netflix after a three-year hiatus. Russian Doll’s first incarnation felt as sui generis as its cocreator and star, Lyonne; the plot used a time loop to weave together Harry Nilsson, roast chicken, unprocessed grief, and New York’s East Village. By the time Nadia and fellow traveler Alan (Charlie Barnett) brought their vicious cycle to an end, Russian Doll appeared to reach the end of its specific, finite story. But now, it’s back—or rather, back again.

Tony Hawk: Until the Wheels Fall Off (HBO Max)

Katie Baker: Told with an appreciative apprehension reminiscent of other extreme-athlete documentaries like 2010’s The Birth of Big Air and 2013’s McConkey, Sam Jones’s Until the Wheels Fall Off is about what it looks like to be a pioneer in a progressive endeavor, and about how it feels when the glory of weightlessness gives way to the dread of the void. “You make it up all the way to the top of the mountain,” one of Tony Hawk’s longtime peers and one of the film’s many interviewees, the Nietzsche-paraphrasing skater Rodney Mullen, reflects in the film, “and there’s nothing left but to get hit by lightning.”