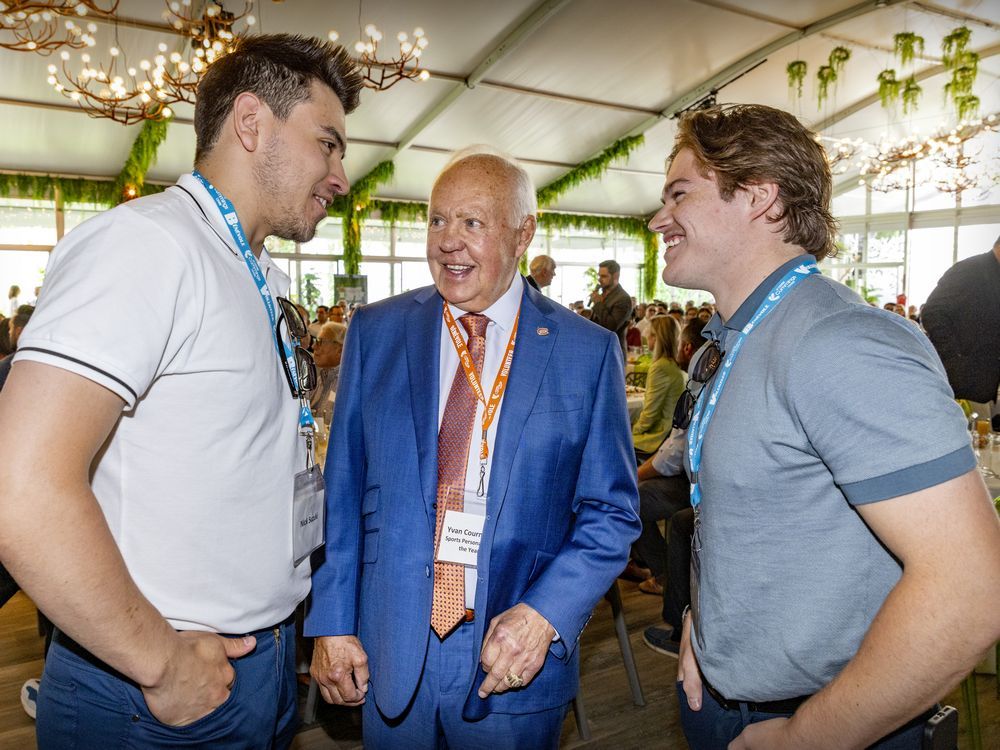 Montreal’s past and present were well represented Sunday at the 18th annual Sports Celebrity Breakfast at Jardin Royalmount.

The event is a fundraiser for the Cummings Jewish Centre for Seniors Foundation and because of COVID-19 this marked the first time in three years it was done in-person. The event has raised more than $2 million over the years and all 400 tickets were sold Sunday.

Before the breakfast began, sports fans of all ages were able to mingle with current and former Montreal sports stars — getting photographs and autographs — followed by on-stage interviews conducted by members of the media.

The only Montreal pro sports team that wasn’t represented, despite being invited, was soccer’s CF Montréal, showing again a lack of connection with the community a year after changing the team name from Impact.

It was fantastic to see Suzuki and Caufield taking the time to mingle with fans, sign autographs and pose for photos. The smiles on the kids’ faces while getting to meet the young Canadiens stars were priceless, as were the smiles on older fans when they got to meet Cournoyer, the Mahovlich brothers and Singleton, who brought back fond memories of when the Expos were “Nos Amours” at Jarry Park.

Stern, Cecchini and Maciocia spoke with passion about how they are working hard to bring back the glory days of the Alouettes at Molson Stadium. Cecchini also noted when he saw Cournoyer and the Mahovlich brothers, he felt like a 10-year-old again.

That’s part of the beauty of this event for a wonderful cause.

Cournoyer won an amazing 10 Stanley Cups during his 16 years with the Canadiens, but there’s one memory he can’t forget.

“I remember the year I lost against Toronto in ’67,” he said.

I often say they don’t make Canadiens players like they used to, when the Stanley Cup parade would take the “usual route” down Ste-Catherine St. But with their appearance at Sunday’s breakfast and the way they mingled with fans, Suzuki and Caufield showed they are learning just how much the Canadiens mean to fans in this city.

It’s something Cournoyer and the Mahovlich brothers have known for years and they showed it again Sunday by their interactions with fans.

“It’s special to put on the jersey every night and to play at the Bell Centre is a dream come true for me and no better place to play than Montreal,” Suzuki said. “That playoff run (to the Stanley Cup final last year) was really special for us. We came up short, but hopefully we can be back there pretty soon with the way this team is built and the guys we’re bringing in. Getting Marty (St. Louis as head coach), the future’s really bright for us and we’re really excited to get back at training camp this year.

“I think right away when Cole came to the team we clicked right away on and off the ice. We love hanging out with each other, playing with each other. Just to build that chemistry for the last couple of years and moving forward … hopefully Cole signs a long-term deal with us. Just to play with him is really special. We have a ton of fun together and hopefully we can win a few Cups just like the older guys.”

Cournoyer said he enjoys watching the two young Canadiens stars play and thinks he might have lost his nickname to Caufield.

“There’s a new Roadrunner,” Cournoyer said, adding you don’t have to look at their numbers to know who Caufield and Suzuki are when they’re on the ice.

The Mahovlich brothers have 10 Stanley Cup rings between them, matching Cournoyer’s total. Frank won four with the Toronto Maple Leafs and two with the Canadiens, while Pete won four with Montreal.

Frank only played three full seasons with the Canadiens, starting in 1971-72, on a line with Cournoyer and Jacques Lemaire. Cournoyer scored at least 40 goals in each of those seasons, while Mahovlich scored 43, 38 and 31 goals during those years.

“I spent three of the greatest years of my hockey career right here with Mr. (Sam) Pollock and the Montreal Canadiens,” Mahovlich said, referring to team’s former GM who won nine Stanley Cups during his 14 years in that position.

Most of the fans in attendance at Sunday’s breakfast were too young to remember those glory days with the Canadiens.

For for those old enough to remember, it was a day to feel like a kid again.