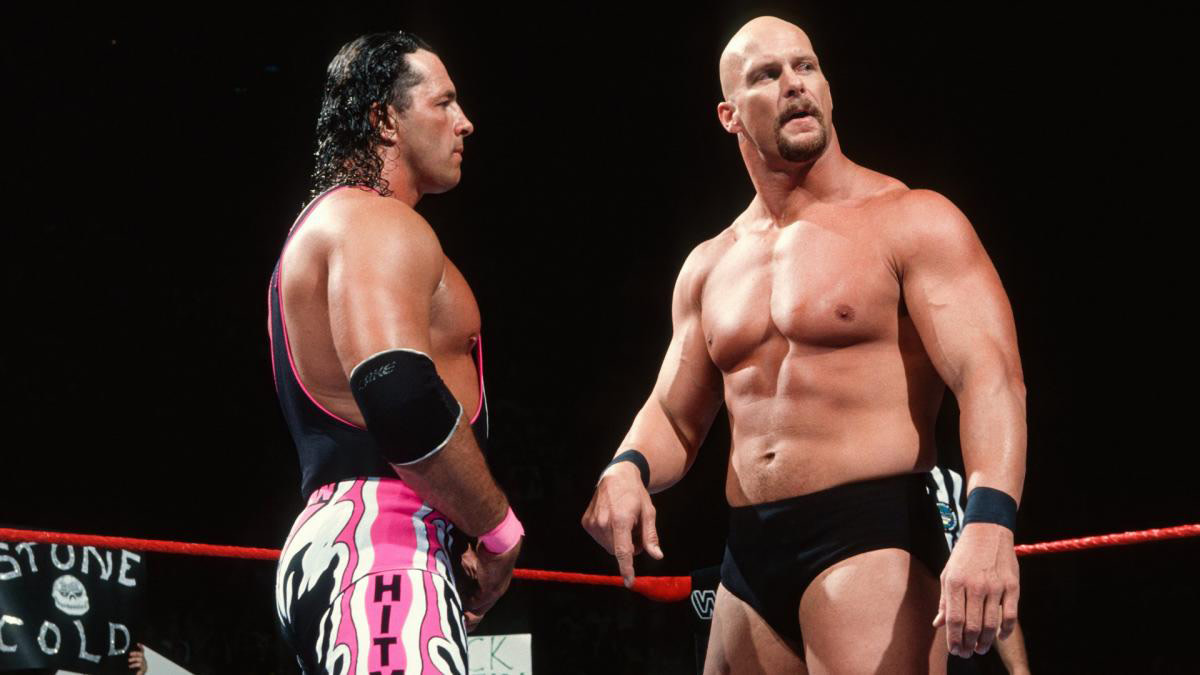 Initially intended to be a rematch from the prior year’s event pitting Hart against Shawn Michaels, this match was expected to be good—perhaps even very good—but it wasn’t expected to alter and shake the entire industry. Yet, in the suburbs of Chicago at the Rosemont Horizon, Hart and Austin executed the best double-turn in the storied history of the industry in their submission match.

The match opened with a fan favorite Hart and villainous Austin, but each reversed roles in masterful fashion within 22 minutes. Hart went on to become the company’s top heel while Austin brought WWE to unforeseen heights as its top star.

“Steve was in his prime,” Hart says. “I don’t think he was ever better. That was my peak moment, too. It was two asteroids hitting at the right time.”

Hart was the architect of the bout, which served as a seminal piece in Austin’s rise to becoming the face of the company and pro wrestling’s single biggest star.

Laying out a match was a skill that Hart harnessed over his decades in and around the ring, and he flourished in this particular moment. Remarkably, this match—which is remembered so fondly—was an old-school grudge match. There wasn’t a title on the line, and it wasn’t positioned in the main event. Third from last on the card, in a match that continues to stand the test of time, Hart and Austin reinvented brilliance in a wrestling ring.

“The funniest thing about that match, and it will probably surprise people, is that we ran out of ideas when we tried to map out the match,” Hart says. “It was all submissions, so there was no one-two-kickout. Taking away the pin falls removed a lot of the element of suspense.

“But we’d always had great chemistry, so we entered the match with confidence. If you look at our match from the Survivor Series in ’96, some people argue that was an even better match. What we had was a storyline and two characters who were destined to cross paths. At that time, Steve was becoming a huge force and was just about ready to break through to a level that few wrestlers ever reach. I was lucky to be there at the right place and right time with him.”

A submission match seemed like a peculiar choice, even in the moment, considering Austin rarely applied submission holds in his matches. Yet they found a way to exceed every expectation, seizing the moment by brawling all around the building and through the crowd, while still finishing with a submission.

“The match with Steve, that’s the greatest song I ever sang,” Hart says. “When I watch it back, I wouldn’t change a thing. I still love seeing that spot where I’m punching the daylights out of Steve in the corner and he kicks me in the groin. It was a beautiful, violent piece of art. Working with Steve was easy, it was fun, and it was memorable.

“We put a lot of heart into that match. It captures every element you see in a back-and-forth UFC fight. I always love the Iron Man match [against Shawn Michaels at WrestleMania XII, too. Pound-for-pound workload, that was the hardest match of my career, but I love the psychology of my match with Steve. I think of the expression, ‘No animals were harmed in the making of the movie.’ There were some hard falls and good shots with Steve, a fight between two warriors.”

The finish is timeless. Blood streamed down Austin’s face, and he sold Hart’s Sharpshooter in an excruciatingly realistic manner. Though it has been attempted on countless different occasions, it is rare to find an ending that accomplished more. Even when Austin’s body quit on him, he still refused to tap, which also set up the following night’s story that solidified Hart as a heel.

“Steve was one of the only guys I talked to about my eventual turn,” Hart says. “It was a big secret and no one knew. Steve did, and I remember him saying that we were switching places but that he wanted to stay a bad guy as long as possible. He liked being a bad guy.

“We had this harmonious relationship. Steve was somebody that had a lot of respect for me, and he showed it in that match. And I wanted to do all I could for Steve in those days. I was a big advocate for Steve before he ever got to WWF, so I was really happy for him.”

Austin’s fame eventually eclipsed even Hart’s. For the first time in 19 years, he is poised to return to the ring this weekend in Texas at WrestleMania 38 against Kevin Owens. Knowing Austin’s standard of excellence, Hart expects to see magic before Austin inevitably stuns the living hell out of Owens.

“I’m looking forward to it,” Hart says. “I’m proud of him. It takes a lot of courage to come back and do what he’s trying to do. I’ll be there to cheer him on.”

After two days of signing autographs, first in Philadelphia at the Icons of Wrestling convention on Saturday and then on Sunday for a never-ending line just outside Boston at Heroes Hideout at the Natick Mall, Hart was honored to pay homage to the sacred bond he shares with his fans. No one in line was rushed—not even the collectors who appeared ready to immediately resell their newly signed title belts—and the handshakes, reminiscing and terms of endearment served as a fountain of youth for the 64-year-old Hitman.

Raised as a wrestling fan, Hart learned the intricacies from his legendary father Stu and created lasting memories with a legion of stars. Yet he never lost sight of the bigger picture, which was performing his absolute best for wrestling fans.

“I always appreciate every fan I’ve ever had,” Hart says. “People might laugh, but I remember a time when I didn’t have many fans, so I never take any fan for granted. That’s one of those values I learned from my parents, to treat people the way you want to be treated.

“I remember what it was like to be a fan, and I remember meeting my favorite wrestlers. A lot of fans have special memories, and hearing those mean a lot to me.”