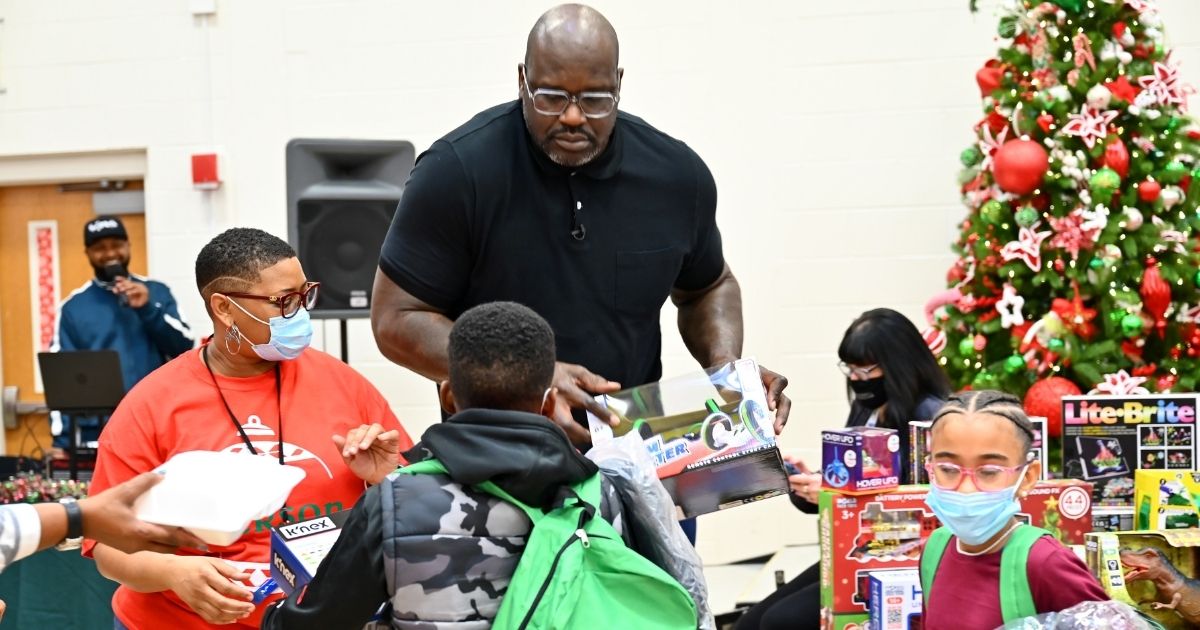 Former NBA star Shaquille O’Neal is known for his generosity in giving to those in need. On a recent podcast, the Hall of Famer said he was able to donate Christmas gifts to thousands of children who otherwise might have gone without.

O’Neal appeared Dec. 22 on “The GaryVee Audio Experience,” hosted by entrepreneur Gary Vaynerchuk, and talked about why giving back was so important to him.

O’Neal said he learned from his past work with Toys R Us that an average of 15 million to 20 million children receive no presents on Christmas.

“I felt that one time. I don’t ever want a kid to feel like that,” he said. “As long as I’m on this earth, I’m always trying to do what I can to make sure the kids get good toys.”

O’Neal said he acquired 1,000 Nintendo Switches and 1,000 PlayStation 5 consoles to give to children who otherwise would not have received such presents.

In addition, he said, he purchased bikes from Walmart.

When the NBA legend delivered gifts at a small elementary school in McDonough, Georgia, he said, “Kids were crying, kids were happy, and that’s what it’s all about.”

WARNING: The following podcast contains vulgar language that some viewers may find offensive.

During his appearance on the podcast, O’Neal also discussed a new project to raise more money for his Shaq Foundation.

According to Afrotech, O’Neal partnered with NFT brand Notables to create 10,000 non-fungible tokens showing himself in various costumes. All proceeds from the NFTs will go to his nonprofit organization.

The collection raised $1 million in just 24 hours after its launch on Dec. 21, Afrotech reported. As of Christmas Eve, it had already raised $2 million for charity.

O’Neal has long used his career earnings to give back to children, especially around Christmas. According to the Shaq Foundation website, he has hosted his “Shaq-A-Claus” events for more than two decades.

When a Cop Gets Shot, NBA Legend Shaquille O’Neal Steps Up for Justice

The annual event started in 1997 and “has provided tens of thousands of toys, clothing, meals and more underprivileged youth across the country,” the website said.

O’Neal has also spoken about the importance of being a good steward of his money, as well as instilling the value of money in his children.

“My kids are older now,” he said last year. “And they’re kinda upset with me — not really upset, but they don’t understand. Because I tell them all the time, ‘We ain’t rich. I’m rich.’”

O’Neal said this was not meant to be harsh, but rather to teach his children to earn their own money so they can be set up for future success.

At the same time, he made it clear that he would not be providing them with handouts.

“You gotta have a bachelor’s or master’s [degree], and then if you want me to invest in one of your companies, you’re going to have to present it, boom boom boom, bring it to me,” he said. “I’ll let you know. I’m not giving you nothing.”

Shaq is a noted good guy.

“15 to 20 million kids wake up on Christmas Day and not receive one gift. I felt that one time. I don’t ever want a kid to feel like that.” pic.twitter.com/NWYrFHJlDP

There is certainly a time for charity, but O’Neal also understands that when his own children get older, they need to know the value of working for their earnings.

With this understanding, the basketball icon has been able to lead a successful career both on the court and in the business sphere.