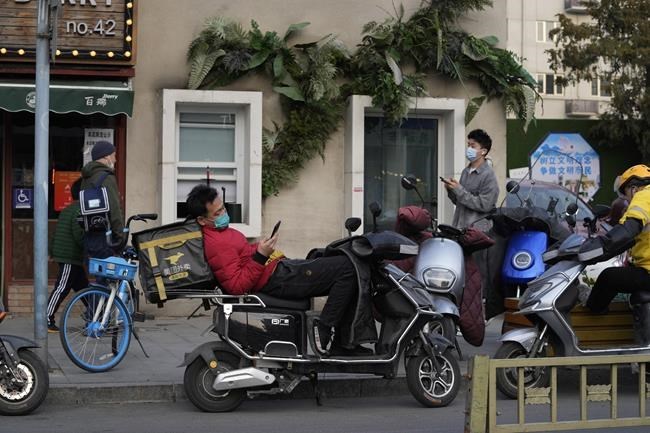 BEIJING (AP) — A two-phase lockdown of Shanghai’s 26 million people is testing the limits of China’s hard-line “zero-COVID” strategy, which is shaking markets far beyond the country’s borders.

BEIJING (AP) — A two-phase lockdown of Shanghai’s 26 million people is testing the limits of China’s hard-line “zero-COVID” strategy, which is shaking markets far beyond the country’s borders.

China’s largest city on Tuesday entered the second day of the lockdown’s first phase, which encompasses the Pudong financial district and adjacent areas on the east side of the Huangpu river that divides the center of finance, manufacturing and trade.

With public transport suspended and bridges and tunnels connecting the two sides of the city closed, usually bustling city streets — including the fabled riverside Bund in Puxi with its century-old historic buildings — were unusually quiet.

Zhang Meisha, a 39-year-old freelancer taking a morning jog along the Bund, said she was trying to get as much sunshine as possible before Puxi goes under lockdown.

“I hope the Shanghai spring can wait for us,” Zhang said.

The shutdown adds to anxiety in financial markets over Russia’s war on Ukraine, the Federal Reserve’s effort to cool surging inflation by raising interest rates and other economic challenges.

Market reactions including Monday’s 7% drop in oil prices in London don’t reflect the “true reality of the situation,” but investors already were uneasy about China and the global economy, said Michael Every of Rabobank.

“We have a whole mountain of problems to worry about, and this is just one foothill among many,” said Every. “If that’s all it is, a COVID lockdown, it’s not difficult to look in recent history books and see how it plays out. But this interfaces with a lot of other issues.”

The new omicron BA.2 subvariant is widely blamed for bringing a new surge in cases to Shanghai, which had suffered relatively little effect from the pandemic that was first detected in the central Chinese city of Wuhan in late 2019.

The measures confining Pudong residents to their homes, closing nonessential businesses and requiring mass testing are due to be lifted Friday. At that time, the vast Puxi area on the opposite side of the Huangpu river that will go under lockdown.

Panic buying has struck markets and some residents have reported shortages of fresh meat and vegetables, including on online platforms. Authorities are working to ensure food supplies and have converted gymnasiums and exhibition centers to house patients, most of whom show no symptoms.

Government workers in hazmat suits, joined by some 68,000 volunteers, have fanned out to man checkpoints around residential compounds walled off with plastic traffic dividers and improvised barriers.

Shanghai recorded 4,477 new cases on Monday, all but 95 of them asymptomatic. Despite a nationwide surge, numbers of new COVID-19 deaths have remained low, with two more added on March 20 for a total of 4,638.

The Shanghai lockdown stands to become the largest of any city in China’s campaign against the virus, in which millions have been confined to their homes for weeks at a time in cities across much of the country.

Despite calls for a more targeted approach and some tweaking of the system, conditions in Shanghai show the government’s continuing reliance on extreme measures, regardless of the social and economic costs.

Authorities say the two-phase approach was designed to reduce disruptions, and unlike in past situations, definite end dates have been given for lockdown in Shanghai. Asymptomatic patients are being quarantined in facilities outside hospitals in order to free up limited medical resources.

“China should be able to contain the virus in the next few weeks, as lockdown is effective,” global financial services firm Macquarie Group said in a report.

“But COVID does pose substantial growth downside risk in the rest of this year, as lockdown is also very costly,” the report said, adding consumer businesses and the property sector were set to take the biggest hits.

The Shanghai lockdown indicates China will stick with the hard-line strategy at least up until the ruling Communist Party holds its once-every-five-year congress this fall or winter, the report said.

Xi Jinping is expected to be granted an unprecedented third five-year term as party leader at the congress. Authorities have promoted the need for stability above all in the runup to the event.

“Zero-COVID” has been credited with preventing mass nationwide outbreaks as seen in the U.S. and other countries and China boasts a vaccination rate of around 87%. However, that percentage is much lower among seniors who are the most likely to catch the virus.

Wang Hui, who runs a shop near the Bund, said high rents and a lack of customers could cost him his business.

“I don’t know how much longer we can last,” Wang said.