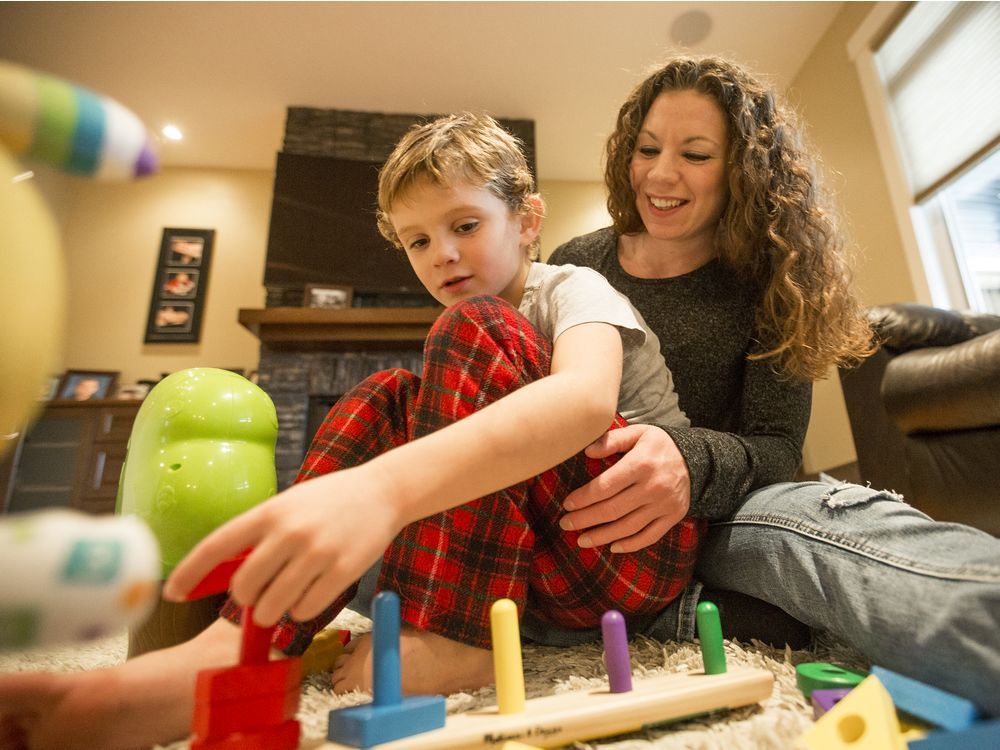 Amy Shout’s family came to Saskatoon because they wanted their sons to have the best education they could.

Shout’s sons Trystan and Ashton are both non-verbal and autistic. She says Saskatoon’s schools offered a level of specialized support they just couldn’t get on the farm they once called home.

But the Saskatoon mother says she already sees how recent budget cuts are gnawing away at those supports, making teachers do more with less.

“The uncertainly of supports that my kids might have outside the home — it worries me,” Shout said.

“Are they going to have that in place? Or is that going to be an extra, private cost in the future for us now?”

Saskatoon Public Schools say the division is seeing growing enrolment of children with intensive needs like the Shouts, drawn to the city by services unmatched in the rest of the province.

But board chair Colleen MacPherson says government funding for such students isn’t following them into the city, contributing to a fiscal gap that has pushed that division to cut services.

“We have more students in our system that require intensive support than we get funding for, but we still have to support them. So we draw from other areas from our operation in order to support those children,” MacPherson said.

In Saskatchewan, support for learning funding (SFL) — a broad term the Ministry of Education uses to describe dollars for vulnerable students — is distributed in a points system as part of a complex funding formula.

But the way cash for students with intensive needs is dispersed is quite simple. Divisions essentially receive money for such students on a per capita basis.

MacPherson argues that leaves Saskatoon high and dry because many families, like the Shouts, relocate to the city because of the services it offers, meaning the proportion of students with such needs is higher.

In the 2021-22 fiscal year Saskatoon Public Schools received $37.9 million in provincial support for learning funding, but had costs of $49.8 million, a $11.9-million shortfall. The board recently passed a budget that included cuts and new fees to cover a $4.5-million deficit.

Those pressures include a $2.2-million operating shortfall at John Dolan School, which teaches students aged 5 to 21 who live with multiple disabilities. It’s a unique school in the province, MacPherson said, that gets applications from across the country.

“It is a school like no other, and we believe it needs a funding model that is different from your neighbourhood school because of the services we provide there,” she argued.

Ministry of Education spokeswoman Stephanie Ali said a review of the funding formula was last done in 2017 and concluded “the current approach for SFL is based on the best information available.” Education Minister Dustin Duncan said he’s open to discussing changing the formula, but that it should be brought to an existing committee.

“We’re very much open to having that discussion,” Duncan said.

Not everyone agrees the answer is cracking open the formula. Saskatchewan School Boards Association President Shawn Davidson agrees Saskatoon may have higher costs for intensive needs students, but argues the real problem is not how funding is divided, but that there just isn’t enough in general.

MacPherson’s hope is that the school board will find a way to keep delivering services to students with special needs, something she said is a “moral obligation.”

“They are our most vulnerable students,” MacPherson said. “I would hate to see the day when we would have to consider reducing the services that we provide.”