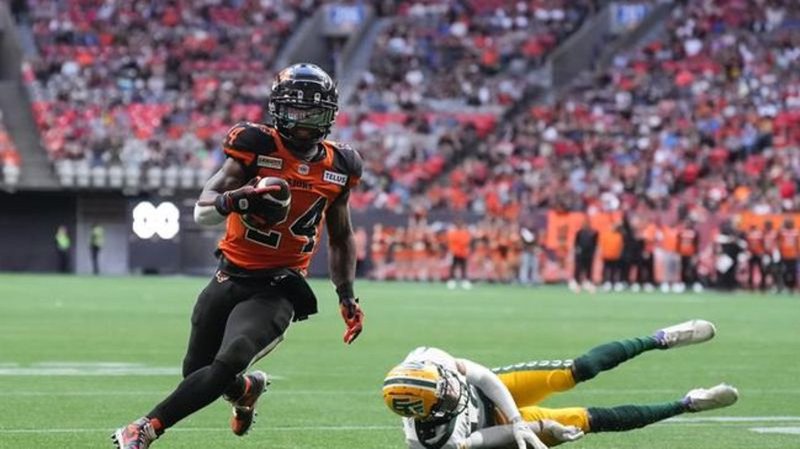 Tre Ford made an appearance under centre for the Elks (0-1) late in the second quarter and registered eight passing yards and an interception.

The Lions dominated from the very beginning, opening the game with a near-perfect nine-play, 68-yard scoring drive.

Rourke — who takes over the No. 1 spot from retired QB Michael Reilly — had ample time to find his targets and finished the series with a short toss to Butler, who darted 10 yards into the end zone for his first major of the game. Whyte added an extra point and the Lions took a 7-0 lead less than five minutes in.

The Elks responded with 35-yard field goal by Castillo.

Lee set up the next drive of the night, picking off an Arbuckle pass intended for Elks wide receiver Jalin Marshall at B.C.’s 50-yard line.

Rourke and the Lions worked the ball up the field and Butler escaped traffic to streak 36 yards into the end zone for another TD. The extra point from Whyte gave B.C. a 14-3 cushion heading into the second quarter.

Castillo cut the advantage to 14-6 with a 37-yard field goal to open the second frame, but the Lions maintained their stranglehold on the game.

Rourke delivered a massive toss early in the quarter, sending a 31-yard bomb to Hatcher near the far sideline. The young QB followed the play up by scrambling out of the pocket for an 11-yard rush, then dished the ball to Butler on the next play. The Iowa product evaded the Elks’ defence and sprinted 21 yards into the end zone for his third TD of the night.

Rourke briefly appeared to chalk up a massive rushing touchdown but the play was called out of bounds. Instead, he settled for a two-yard sneak on a third down that increased the Lions’ lead to 35-6.

After seeing Arbuckle sacked by Teuhema and without a touchdown on the scoreboard, the Elks opted to bring on Canadian Tre Ford at quarterback to close out the second quarter.

With less than a minute to go in the half, Lee dove to pick off a pass from Ford to receiver Mike Jones. The veteran Lions defensive back rolled, then sprinted 48 yards down the field and leapt into the end zone with a forward roll. His touchdown was quickly called off, with officials ruling the ball was dead at Edmonton’s 42-yard line.

But the play set up yet another scoring drive for B.C., with Rourke finding Hatcher on the goal line with a six-yard pass. As he was being hauled to the ground, Hatcher stretched out and touched the ball into the end zone, marking the fourth consecutive TD drive for the home side.

The Lions took a 42-6 lead into the locker room, tying a franchise record set in 1981 for most points scored in a half.

Arbuckle returned at quarterback for the Elks to start the third, a move that gave Edmonton some early momentum.

Just over four minutes into the quarter, Locksley completed a one-yard quarterback sneak to give the Elks their only touchdown of the game. Edmonton went for the two-point convert, but Arbuckle’s pass to Jones fell incomplete.

The Elks tried to build on the scoring drive, pushing steadily down the field on their next possession before Teuhema once again sacked Arbuckle, this time for a nine-yard loss. Edmonton settled for a 30-yard field goal and whittled its deficit to 42-15.

Rourke boosted the home side’s lead with a 17-yard rushing TD and Teuhema closed out the quarter with his third sack of the game.

Whyte gave the Lions a 52-15 advantage with a 13-yard field goal late in the fourth quarter before the Lions took yet another bite out of the Elks’ offence.

With just over three minutes left in the game, B.C.’s Loucheiz Purifoy leapt up and picked off Arbuckle’s pass, then raced 40 yards, deep into Edmonton territory to set up another Lions scoring drive.

O’Connor muscled the ball over for a TD, sealing the score at 59-15.

Edmonton will host the Saskatchewan Roughriders next Saturday. The Lions have a bye week and will be back on June 25 when they entertain the Toronto Argonauts.

NOTES: Elks linebacker Wesly Appolon went down with an apparent leg injury after the first play from scrimmage and was taken off the field on a cart. … O’Connor acted as Rourke’s backup, marking the first time in the CFL’s modern era that a team has fielded a Canadian quarterback duo. … An enthusiastic crowd of 34,082 took in the game and a pre-game concert by rockers One Republic.

This report by The Canadian Press was first published June 11, 2022.