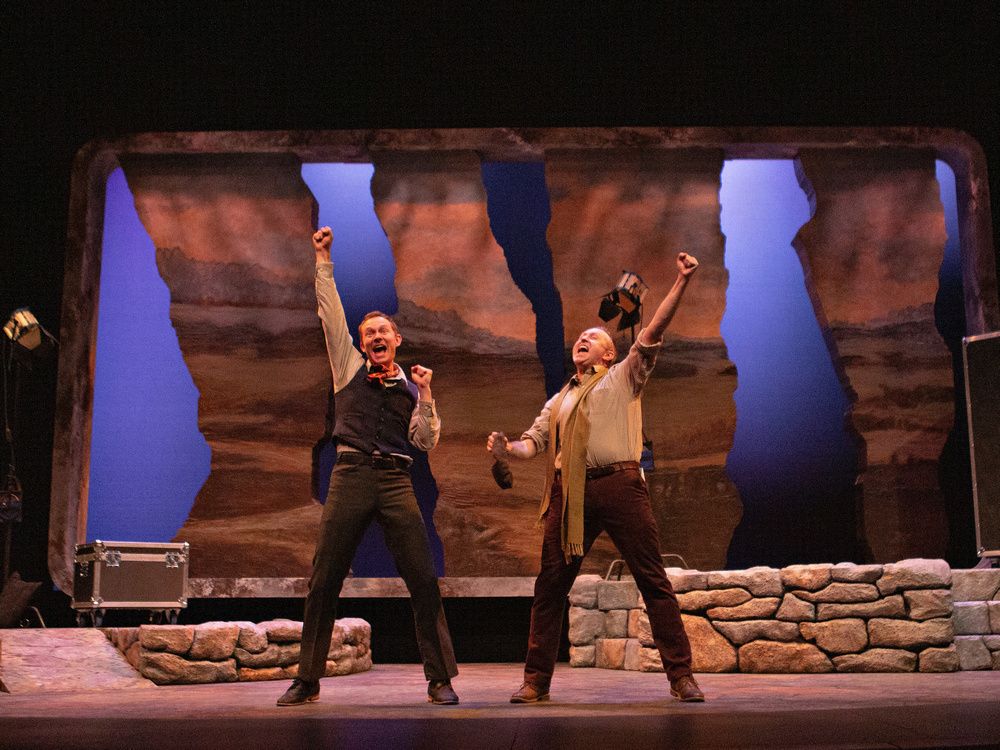 Reviews and recommendations are unbiased and products are independently selected. Postmedia may earn an affiliate commission from purchases made through links on this page.

As a torrent of production people swirls around a film set in an Irish town, the question arises of whether the cows — quintessential inhabitants of the Irish countryside — look Irish enough.

In that moment, two of the film’s extras, Charlie Conlon (Skye Brandon) and Jake Quinn (Nathan Howe) share a chuckle at the ridiculousness of it all.

The magic of Marie Jones’s Stones in His Pockets is that the crowd Charlie and Jake emerge from is created entirely by the two actors portraying them.

Brandon and Howe play all 15 characters in this madcap dark comedy at Persephone Theatre, about a film crew dropping into an Irish town to film a romantic, and romanticized, picture about the Irish peasantry.

The way Brandon and Howe shift from person to person, across age and gender, is like a carefully choreographed ballet.

Transitions between characters largely happen on stage, with minimal costume changes, and the two are so in sync that one can disappear behind the other and emerge as someone else.

Occasionally the actors appear to be thrown from one character into the next as the force of that persona hits them. It’s one of many examples of Director Joshua Beaudry applying his slapstick sensibilities to the script.

It’s humorous throughout, but the show does some emotional heavy lifting when things eventually take a turn for the dramatic.

The tension at the core of Stones in His Pockets is the dichotomy between how the village and its inhabitants are seen by the world and how things really are.

The town has hosted other film sets over the years. While for many community members the relationship appears reciprocal, it’s easy to see how for some it may be more parasitic — especially when the reality facing some inhabitants rubs up against the gloss of Hollywood.

Across costume, set, sound and staging, this show is made up of talented artists coming together to create a cohesive, entertaining showcase of their abilities.

Within the broader context of the current moment, it comes at a perfect time. The show was all ready to go before the pandemic hit, and with it now sitting at the front of this year’s season one can’t help feeling hopeful about what’s to come.

There have been plenty of conversations within the province’s arts community about the importance of performance in bringing people together, and Stones in His Pockets exemplifies that.

There’s something wondrous about gathering in a dark theatre to laugh from the pit of your gut again. This isn’t to be missed.

Stones in His Pockets runs at Persephone Theatre until Oct. 2.