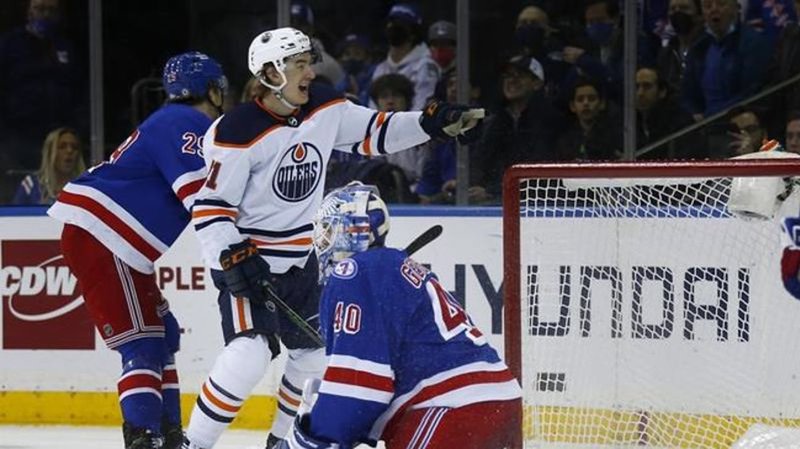 The Rangers held Oilers stars Connor McDavid and Leon Draisaitl — the NHL’s top two point scorers at 53 and 52, respectively — off the scoresheet. McDavid had seven shots on goal, and Draisaitl had two.

On the Rangers’ third power play of the game, they took advantage after extended puck possession in the offensive zone to push the lead to 3-1. Kreider deflected Fox’s point shot between Koskinen’s legs. The goalie thought he stopped the puck but it slowly trickled behind and over the line at 3:32. It was Kreider’s 12th power-play goal, trailing Draisaitl by one for the league lead.

The Oilers were pressing on their power play midway through the third, but Georgiev made a stellar glove stop on McDavid’s attempt from the right side. With the puck loose in front, he then denied Zach Hyman with 8 1/2 minutes left to draw chants of “Geor-gie! Geor-gie!” from the crowd.

Strome then made it 4-1 as his centering pass from the right side deflected off the skate of Oilers defenseman Tyson Barrie and past Koskinen for his eighth goal with 5:49 left.

The Rangers led 1-0 after 20 minutes and doubled their lead early in the second period. Lafrenière brought the puck up the right side on a rush, sent a centering pass from the edge of the right circle to Goodrow, who beat Koskinen for his seventh at 3:49.

Mika Zibanejad, who had his eighth career hat trick Sunday in a 4-0 win over Tampa Bay, nearly added to New York’s lead but hit the crossbar at 7:43.

The Oilers cut their deficit in half a little more than six minutes later. Tyler Benson got a pass from Kyle Turris, skated along the right side and sent a centering pass from the corner and McLeod deflected it past Georgiev for his fourth with 6:00 remaining in the middle period to make it 2-1.

The Rangers went on a power play 15 seconds into the game when Koskinen was whistled for delay of game for sending the puck over the glass. The Oilers’ goalie made a nice stops on Kaapo Kakko’s tip of a shot through traffic by Fox and then on Chris Kreider’s rebound try in front 1 1/2 minutes in.

Georgiev had a nice stick save on a slap shot by Jesse Puljujarvi 4 1/2 minutes in.

Lafrenière got the Rangers on the scoreboard less than a minute later after Koskinen left the crease to play the puck behind the net. Strome skated up and took the puck away from him and sent it in front to Lafrenière, who quickly scored is eighth before the goalie could get back in position at 5:25.

Edmonton came in with the league’s top power play at 31.2%, but went 0 for 2 against the Rangers. The Oilers are scoreless in four chances over their last four games.

Oilers: At Toronto on Wednesday night to wrap up a five-game trip.

Rangers: At Vegas on Thursday night to open a five-game trip.

Vin A. Cherwoo, The Associated Press