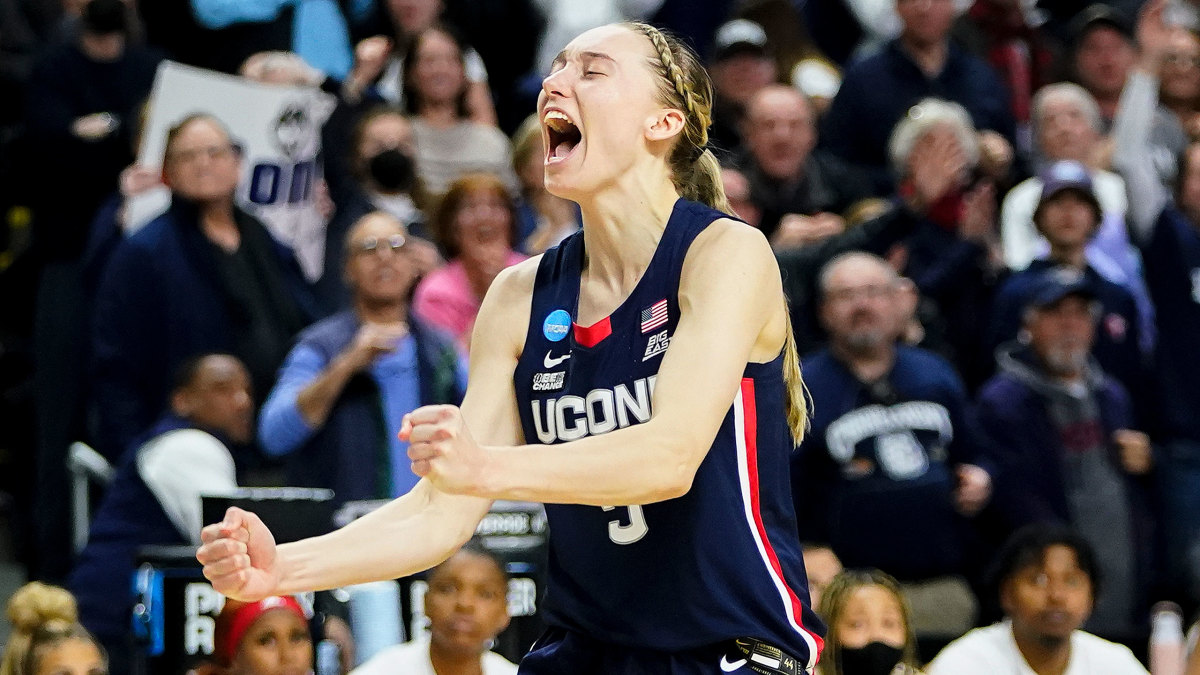 BRIDGEPORT, Conn. — Just over 90 minutes after her masterclass performance had concluded, UConn star Paige Bueckers strolled into the stands at Total Mortgage Arena and was greeted to one final curtain call. The cheers, coming from the few dozen UConn family members and friends who were waiting for their Huskies to emerge from the underbelly of the stadium, were far quieter than the roars she had garnered earlier in the evening. But with a gray Final Four hat attached to her head, they appeared every bit as meaningful.

In No. 2 UConn’s 91–87 double-overtime win over No. 1 NC State on Monday night, Bueckers played the kind of game that the likes of Diana Taurasi, Sue Bird and Breanna Stewart have logged for Huskies teams’ past. Of her game-high 27 points, 17 came in the fourth quarter and overtime periods. In its most important moments, the star guard with perhaps the smoothest stroke in the sport, buried jumper after jumper, free throw after free throw. Bueckers said she felt composed. Her mother, Amy, had a different reaction.

“Stressful. Very,” Amy says. “I like to win games by like 20, but I was really confident this team had it.”

Senior guard Christyn Williams felt similarly about her team’s chances in the two extra sessions. Her reason was simple: “We have Paige Bueckers and they don’t.”

Entering Monday night’s contest, UConn coach Geno Auriemma said Elite Eight matchups were the “most challenging game of the year.” But even for the Huskies coach of 37 years, his team’s win over the Wolfpack proved especially draining. “It’s one of the best games I’ve ever been a part of since I’ve been at UConn,” Auriemma said. “It’s a shame one of us had to lose, right? It would be great if both of us could go. But if there’s two teams out there better than this one, holy moly.”

NC State forward Kayla Jones scored the game’s first basket, but Williams answered with a three-pointer one possession later. UConn would lead from the 9:13 mark in the first period until the 9:26 mark of the fourth quarter, holding a two-point advantage after the first period, a six-point lead at halftime and just a one-point cushion after the third.

While for the final 20 minutes of the contest, the teams traded buckets—with the margin between them never growing larger than five—for the first 30, they traded elbows. The thud of bodies hitting the floor was as commonplace as three-pointers being made, perhaps even greater, considering the top two seeds in the Bridgeport Region were a combined 6-for-33 from deep entering the final frame.

Auriemma believes that the ability to remain calm in high-leverage situations doesn’t come naturally to most people. He says, instead, it’s a “learned skill.” It’s one Bueckers exhibited in the victory, which came in the first-ever Elite Eight women’s NCAA tournament game to need two extra sessions. But amid a UConn season that has seen Auriemma trot out 11 different starting lineups, he has seen similar poise in freshman guard Azzi Fudd.

Tim Fudd watched anxiously from section 114 as his daughter logged a game-high 49 minutes. Despite his nerves, Azzi displayed the composure of seasoned-veteran. She finished with 19 points, eight of them coming in the fourth quarter and overtimes. “It’s a gift,” Tim says. “It’s a God’s gift to be able to go up there, step-up and block everything out.”

Azzi showed little fatigue throughout the marathon outing. But as the normally polished Fudd addressed reporters following the win, the exhaustion caused by the victory seemed to be settling in. When asked about her team’s energy in the two overtimes, Fudd said, “In the second overtime you could tell the way Paige started us off, that really just kind of started…” Her thoughts trailed off. “The way Paige started us off. Someone else take this. I can’t speak right now.”

It was about all she couldn’t do in the win; the one thing on Monday night that she left unfinished.

There was one moment in which Bueckers did appear to break, if only momentarily. When Wolfpack junior forward Jakia Brown-Turner hit a game-tying three-pointer with 0.8 to play in the first overtime, Bueckers, who was contesting the shot in the left corner, put her hands on her head in disbelief. They remained there for just a second, though, before she sprinted back to UConn’s sideline.

Minutes later, to no surprise of the overwhelmingly pro-UConn crowd, she buried the aforementioned three-pointer to give the Huskies an early lead in the second overtime. They never trailed in the game’s final five minutes.

The Wolfpack were looking to reach their first Final Four since 1998. They had eked out a victory over No. 5 Notre Dame on Saturday afternoon, snapping a streak of three consecutive Sweet 16 losses. Coach Wes Moore trotted out his usual veteran group against UConn, hoping that the five-person lineup that has started all but 11 games over past two seasons would lift them to the sport’s biggest stage. And despite 20 points from Brown-Turner, 18 from senior center Elissa Cunane, 14 from sophomore forward Jada Boyd and 12 points apiece from graduate guard Kai Crutchfield and Jones, they came up just short. “Definitely got all [the] effort and heart that you could ask for out of them,” Moore said.

UConn, as a result, is heading to its 14th consecutive Final Four. On Friday night, it will meet reigning champion Stanford in Minneapolis. Fittingly, the game is set at Target Center, about 10 miles from where Bueckers grew up.

The sophomore sensation didn’t stop moving during her team’s postgame celebration. At midcourt, she shared long embraces with Fudd and key reserve forward Dorka Juhasz, who exited the game with a wrist injury in the second quarter. As she rejoiced in various team photos she played with where she sat and how she posed. And for a brief moment, amid the jubilant scene, Bueckers also took particular joy in knowing what was on the horizon.

“I’m going home to Minneapolis,” she said to a wall of photographers.

Of course, after 50 grueling minutes, she had made sure UConn’s journey would continue on.