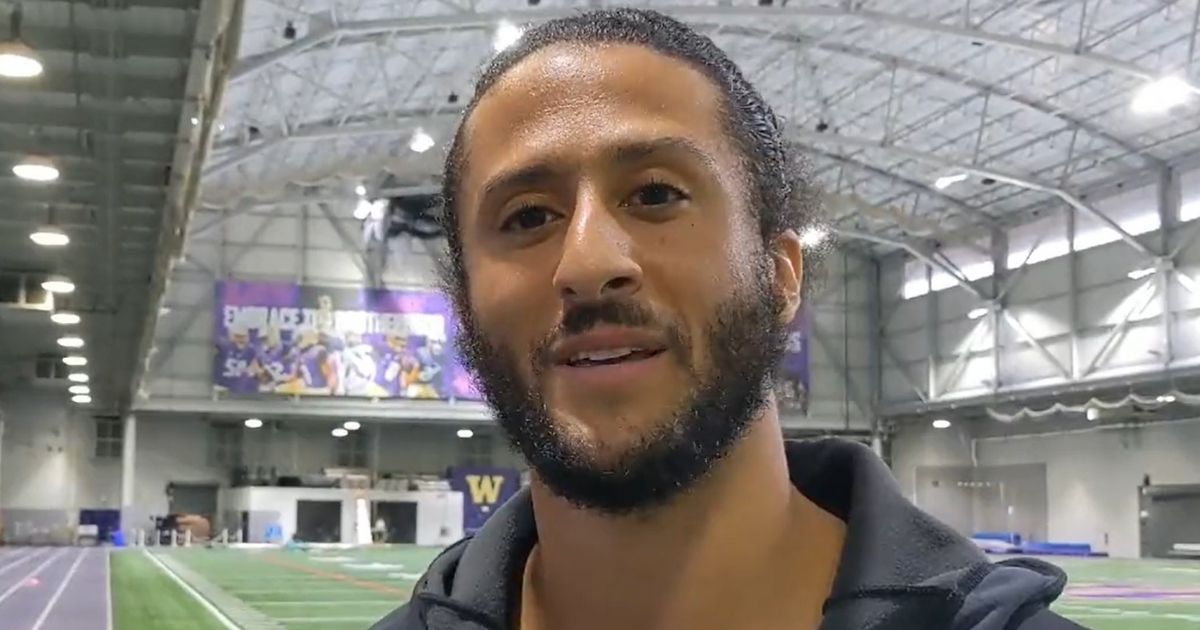 Colin Kaepernick, you need to stop being so thirsty. It’s getting pathetic.

For those who haven’t been paying attention, Kaepernick — who hasn’t played professional football in over five years — has been trying to tempt NFL teams into taking him. They haven’t gone for the hints he’s been dropping. So now, the full-time social justice warrior is making an overt, desperate plea to those teams: Give him a shot.

Despite the league making it clear it wants Kaepernick signed, the quarterback’s supporters will continue to insist — should he not get the chance — that it’s all a result of a hidebound sport trying to keep a leftist out. Here at The Western Journal, we’ve pointed out in the past why this logic is so flawed and how the former San Francisco 49ers quarterback is out of the game because his talent doesn’t justify the risk. We’ll continue to bring readers these kinds of blunt truths. You can help us bring America the facts by subscribing.

The latest message from Kaepernick seems to be that if you just bring him in to try out, he’ll prove how awesome he is. Really!

“Where my skills are, the best way to tell is to bring me in for a workout,” he told reporters earlier this week.

“We have no expectations of what teams will do. But we just want the opportunity to walk in the door and show them what I can do, and I think my talent, my skill set, will speak for itself.”

Kaepernick on his message to NFL teams concerned on him being out of the league for 6 years –@komonews pic.twitter.com/ryllJOlVgB

According to The Seattle Times, this came after a workout at the University of Washington.

Just to prep you on the timeline that led up to his workout: Earlier this month, Kaepernick posted a video of himself working out, captioning it, “Still Working.”

Did you get the hint? No? Here’s Kaep just a few days later: “For The past 5 years I’ve been working out and staying ready in case an opportunity to play presented itself. I’m really grateful to my trainer, who I’ve been throwing to all this time. But man, do I miss throwing to professional route runners.

For The past 5 years I’ve been working out and staying ready in case an opportunity to play presented itself. I’m really grateful to my trainer, who I’ve been throwing to all this time. But man, do I miss throwing to professional route runners.

Who’s working?? I will pull up

Kaepernick Likened NFL to Plantation, Draft to Slave Auction – He Still Wants to Play in It, Though

And here’s some workout footage. pic.twitter.com/lKgLktsDxt

The latest workout at the University of Washington was with Aaron Fuller, a wide receiver for the Seattle Seahawks and an alumnus of the school.

Now, as always, no one in the league can come right out and say Kaepernick should give up the ghost. The latest person dangling hope in front of him is Seahawks coach Pete Carroll.

“Does that guy deserve a second shot? I think he does,” Carroll said, although he didn’t acknowledge that the chance would come in Seattle.

Will Colin Kaepernick ever play again in the NFL?

When asked to respond to the remark, Kaepernick said he was “still waiting for that chance.”

“Still hopeful,” he said, per The Athletic. “There’s been a lot of conversation around it. We’ve had conversations with Pete and [Seahakws general manager] John [Schneider] previously. As Pete mentioned, we’ve spoken recently and still hoping that door is open and get a chance to walk through it.”

Look, if Kaepernick gets a chance in Seattle after a workout, more power to him. The Seahawks are a team that could use a quarterback, given that they traded away nine-time Pro Bowler Russell Wilson to Denver and are left with only former Broncos disappointment Drew Lock and Indianapolis Colts castoff Jacob Eason.

However, the fact the Seahawks never signed Kaepernick in the first place is an indication of why he’s unlikely to see play again in the league.

Kaepernick is, like Wilson, a mobile quarterback. Carroll is a liberal coach in a liberal city with a team that has a liberal ownership group. Kneeling for the national anthem wouldn’t have been an issue there. Heck, it was practically a job requirement.

The Seahawks brought him in for a visit in 2017. Kaep would have made an ideal backup if the team thought he could play.

The fact he was never signed indicates they didn’t. And it wasn’t like he was blackballed or serving some kind of shadow-ban from the NFL. In 2019, he held a workout for pro teams. No interest. In 2020, in the wake of the George Floyd riots and Our Great National Reckoning™, NFL Commissioner Roger Goodell practically begged teams to sign him. Again, no dice.

What people forget is that Kaepernick’s career was already on a downward trajectory when he started his anthem protests. When we think about him as a star, what we think about are his first two years as a starter with the 49ers in 2012 and 2013. During those seasons, he went 17-6 and took the team to the Super Bowl and the NFC Championship Game, respectively.

Kaepernick’s activist period began during the back half of his career. Between 2014 and 2016, he was 11-24 as a starter and didn’t appear in a single playoff game. What’s more, every year during that period he regressed.

In his final season, he was benched for Blaine Gabbert and put together a 1-10 record as a starter — after which he opted out of his 49ers contract.

All in all, Kaepernick spent five seasons as a starter — as much time as he’s spent away from the game. Part of his strength was being a mobile quarterback who could also rush for yardage. But mobility decreases with age and Kaepernick is now 34, well past the point at which most players cease to be a rushing threat.

If he simply stepped away from the game, he might recede from memory — indeed, he’s mostly done that as a player — but he’d be celebrated by the left as a martyr, someone who was drummed out of the sport solely because he spoke truth to power.

In fact, the worst thing that could happen to him now is that he gets back into the league and we find out that’s very much not why he hasn’t played a down since Jan. 1, 2017.

Be careful about what you’re thirstily wishing for, Mr. Kaepernick. You just might get it.

In fact, as a conservative and someone who thinks your politics are piffle and your persecution complex is wholly unearned, there’s nothing I’d like more than to be proved right.

Just please avoid the Giants; I root for them and, as much as I don’t mind another high draft pick, I don’t think I can stand them being more pathetic than they already are.

C. Douglas Golden is a writer who splits his time between the United States and Southeast Asia. Specializing in political commentary and world affairs, he’s written for Conservative Tribune and The Western Journal since 2014.

C. Douglas Golden is a writer who splits his time between the United States and Southeast Asia. Specializing in political commentary and world affairs, he’s written for Conservative Tribune and The Western Journal since 2014. Aside from politics, he enjoys spending time with his wife, literature (especially British comic novels and modern Japanese lit), indie rock, coffee, Formula One and football (of both American and world varieties).