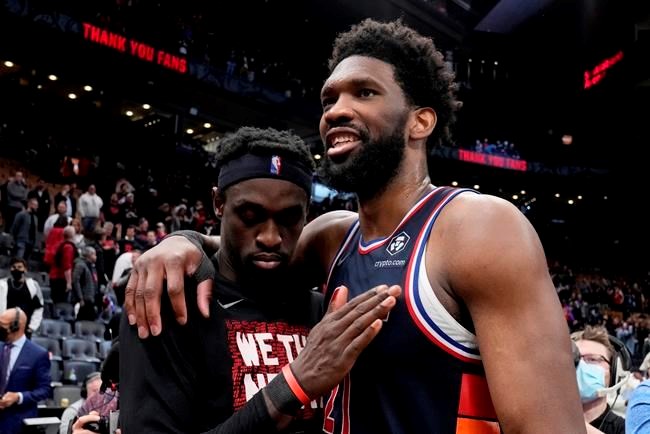 TORONTO — In the span of 12 minutes, the Raptors’ dreams of an historic playoff comeback turned into a nightmare.

TORONTO — In the span of 12 minutes, the Raptors’ dreams of an historic playoff comeback turned into a nightmare.

The Philadelphia 76ers ran roughshod over disorganized Toronto with a massive third quarter Thursday, en route to a 132-97 rout that ended both the Raptors’ roller-coaster season and lofty hopes of becoming the first team in NBA history to win a series after trailing 3-0.

Chris Boucher had 25 points and 10 rebounds as one bright light on an otherwise awful night, and Pascal Siakam added 24 points for the Raptors, who lost the best-of-seven opening round series 4-2.

“Listen, they’re disappointed, for sure, pretty heavy air in (the locker room),” coach Nick Nurse said. “They’re disappointed. My message was that, as a whole, I thought we went through a tremendous amount this year with a number of things and we just kept fighting and kept playing and kept getting better and kept figuring things out. And it was never really smooth, right. There was always a big ol’ bump in the road.”

Gary Trent Jr. finished with 19 points, while rookie Scottie Barnes had 18 points for the Raptors, who were playing without all-star guard Fred VanVleet.

Joel Embiid, the seven-foot centre Raptors fans love to hate, had 33 points and 10 rebounds for the Sixers, who won the series 4-2. They’ll face the Miami Heat in the second round.

“We weren’t going back to Philly for a Game 7,” said James Harden, who had 22 points and 15 assists.

The Raptors looked all but cooked after losing the series’ first three games, but won back-to-back elimination games, fuelling hope among fans of an historic series comeback victory.

Coming off a dominant 103-88 win on Monday, the Raptors kept it within seven points for the first half despite horrible shooting. But they never looked in synch on either end of the floor all night, and the Sixers blew the game wide open with a 30-9 run in the third quarter.

“Listen, congratulations to them, first of all. I thought they were certainly great in three of these games in this series, they were really great,” Nurse said of Philly. “They shot it, they passed it really well in three of the games and tonight was one of them.

“Obviously, we don’t guard at all in the second half, we can’t stop ‘em.”

The Sixers hit six threes in the third quarter, to the groans of the Scotiabank Arena crowd of 19,800 fans, and a Harden long bomb put Philly up by 22 points with 3:52 left in the frame. The visitors outscored Toronto 37-17 in the quarter, and led 99-78 to start the fourth.

A Barnes jumper less than a minute into the fourth slashed the difference to 18, but Embiid almost singlehandedly snuffed out any hopes of an improbable comeback, scoring 10 points in less than four minutes. And when Tobias Harris threw down a dunk with 4:34 to play, the basket put Philly up by 27 points.

“You’ve just got to be truly resilient through the process. Tonight you saw that,” said Harris. “A full effort pretty much the whole game of how we wanted to play and just sticking through.”

Embiid celebrated Harris’s dunk by running up the court with his arms outstretched like an airplane — reminiscent of the 2019 Eastern Conference semifinals against Toronto. Boos rained down on the seven-foot centre.

Harris’s three with 3:38 to play saw the Sixers go up by 32 points, and sent numerous fans heading for the exits.

Siakam fouled out of the game with 2:14 to play, and received a standing ovation as he left the game. The Scotiabank Arena crowd chanted “Let’s go Raptors!” as Nurse subbed off his starters at that point.

Nurse praised Boucher, who had 11 of his points in the second quarter.

“When he gives that relentless energy like that, he can make a lot of good things happen,” Nurse said. “He was cutting and flying around and rebounding, I think he had six offensive rebounds by himself in the first half. He had a block shot on the three, just using his gifts like that and doing it.

The Raptors sorely missed the steady hand of three-point specialist VanVleet, who sat his second straight game with a strained left hip flexor. The Raptors struggled from long distance all series. Nick Nurse kept saying they were due for a big three-point shooting game.

The Raptors’ loss ended a season that began with low expectations, saw them play for several weeks in Toronto in a virtually empty arena due to COVID-19 restrictions, but picked up momentum after the all-star break when the Raptors won 14 of their final 18 games.

With their win in Philly on Monday, the Raptors became the 14th team — and first since Milwaukee in 2015 — to force a Game 6 after trailing 3-0. The Bucks went on to lose 4-2 to Chicago. In the league’s 75-year history, 146 teams have faced 3-0 deficits in seven-game series.

The Raptors were looking to become the fourth NBA team to force a Game 7 after trailing 3-0.

The Raptors hit seven of their first eight shots, then went more than five minutes without a field goal, missing 10 straight shots. Harden, who had just 15 points in Game 5, had 10 in the quarter, and the Sixers led by seven a couple of times. Philly was up 34-29 to start the second.

A Boucher three-pointer highlighted a 15-5 run to start the second that saw the Raptors go up by five. Green had four three-pointers and 12 points in the quarter as the Sixers battled back, and led 62-61 at halftime.

The Raptors shot just 3-for-15 from long distance in the first half.

The Sixers were without Matisse Thybulle, who isn’t eligible to travel to Toronto because he’s not fully vaccinated for COVID-19.