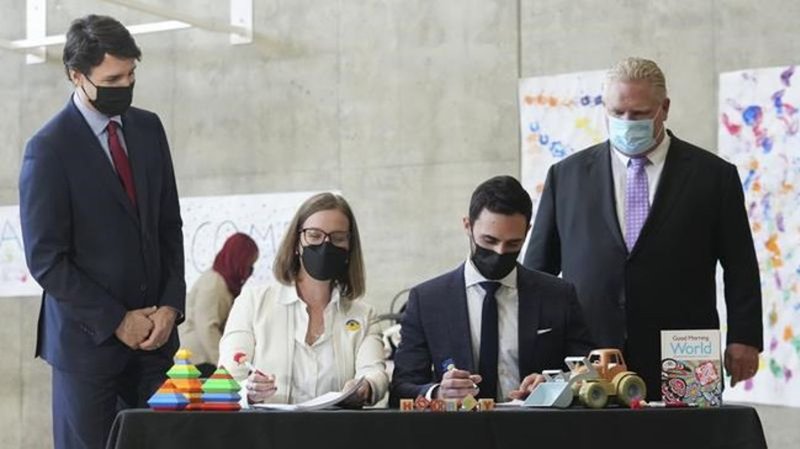 Gould says her aim was to introduce a bill by this spring, but she now has until the end of the year as part of the confidence and supply agreement with the NDP.

Federal officials have been quietly consulting experts on what should be in the law.

The consultation document obtained by The Canadian Press says the legislation could commit to “ongoing collaboration” between the federal, provincial and territorial governments over the daycare system, including a pledge for “sustained federal funding.”

The paper also suggests annual public reports and a national advisory council could be included as part of “various mechanisms” to ensure federal accountability.

The plan is a legal requirement under the net-zero accountability law the Liberals passed last year.

It will model emissions projections for different sectors that are feasible and necessary to achieve Canada’s current goal to curb emissions to no more than 60 per cent of what they were in 2005 before the end of the decade.

The plan was supposed to be tabled by the end of December but Guilbeault exercised a clause allowing him to ask for three more months.

He says Canadians will see something in the plan they never have before: a road map to actually meet a climate target.

Canada has issued at least 11 plans and set nine different emissions targets since 1988, but has never met a single one of them.

The NDP says a promise to ban the use of replacement workers in lockouts and strikes at federally regulated workplaces is a “huge win.”

The party’s deputy labour critic, Matthew Green, says federal agreement to include the measure in a planned law was a key part of negotiating the recent confidence and supply deal with the Liberals.

Unions have been calling for the change for decades – and are celebrating the news.

But the Canadian Federation of Independent Business says any prolonged job action in critical federal infrastructure will hurt business owners across the country.

A 2009 study shows so-called “anti-scab” laws lead to more frequent strikes, but they aren’t as long.

Labour Minister Seamus O’Regan says the government will be doing policy research and consultations before introducing the bill by the end of next year.

California’s first-in-the-nation task force on reparations is at a crossroads, with members divided on which Black Americans should be eligible for compensation as atonement for a slave system that officially ended with the Civil War but reverberates to this day.

Some members want to limit financial and other compensation to descendants of enslaved people while others say that all Black people in the U.S., regardless of lineage, suffer from systemic racism in housing, education and employment. The task force could vote on eligibility on Tuesday after putting it off last month.

Gov. Gavin Newsom signed legislation creating the two-year reparations task force in 2020, making California the only state to move ahead with a study and plan, with a mission to study the institution of slavery and its harms and to educate the public about its findings.

The committee is not even a year into its two-year process and there is no compensation plan of any kind on the table. But there is broad agreement among advocates of the need for multi-faceted remedies for related yet separate harms, such as slavery, Jim Crow laws, mass incarceration and redevelopment that resulted in displacement of Black communities.

Compensation could include free college, assistance buying homes and launching businesses, and grants to churches and community organizations, advocates say.

Yet, the eligibility question has dogged the group since its inaugural meeting in June, when viewers called in pleading with the nine-member group to devise targeted proposals and cash payments to make whole the descendants of people enslaved in the U.S.

California Secretary of State Shirley Weber, who authored the legislation creating the task force, had argued passionately in January for prioritizing descendants for generations of forced labour, broken family ties and police terrorism. The daughter of sharecroppers forced to flee Arkansas in the dead of night, she recalled how the legacy of slavery broke her family and stunted their ability to dream of anything beyond survival.

Opening up compensation to Black immigrants or even descendants of slaves from other countries would leave U.S. descendants with mere pennies, she said.

LVIV, Ukraine _ Another round of talks aimed at stopping the war in Ukraine was scheduled for Tuesday as the fighting appeared stalemated on the ground, with the two sides trading control of a town in the east and a suburb of the capital.

Ukrainian forces retook Irpin, northwest of Kyiv, from Russian troops, who were regrouping to take the area back, President Volodymyr Zelenskyy said late Monday as he sought to rally the country.

“We still have to fight, we have to endure,” Zelenskyy said in his nighttime video address to the nation. “We can’t express our emotions now. We can’t raise expectations, simply so that we don’t burn out.”

Ahead of the talks in Istanbul, the Ukrainian president said his country is prepared to declare its neutrality, as Moscow has demanded, in comments that might lend momentum to negotiations.

Zelenskyy said over the weekend that compromise might be possible over “the complex issue of Donbas,” the hotly contested region in the country’s east. It’s unclear how that might be reconciled with his stance that “Ukraine’s sovereignty and territorial integrity are beyond doubt.”

Russia has long demanded that Ukraine drop any hope of joining NATO, which Moscow sees as a threat. Zelenskyy, for his part, has stressed that Ukraine needs security guarantees of its own as part of any deal.

As fighting raged throughout the country, the mayor of Irpin, which has been the scene of some of the heaviest fighting, said the city had been “liberated” from Russian forces.

A senior U.S. defence official said the U.S. believes the Ukrainians have also retaken the town of Trostyanets, south of Sumy, in the east.

Niagara Falls stopped flowing for the only time in recorded history. The flow was blocked for 30 hours by an ice jam at the Lake Erie entrance to the Niagara River.

LOS ANGELES _ The day after slapping Chris Rock on the Oscars stage and upending the 94th Academy Awards, Will Smith issued an apology to the comedian, to the academy and to viewers at home, saying he was “out of line” and that his actions are “not indicative of the man I want to be.”

The fallout from Smith’s actions during Sunday’s ceremony continued Monday as Hollywood and the public continued to wrestle with a moment that stunned the Dolby Theatre crowd and viewers at home. The Academy of Motion Picture Arts and Sciences condemned Smith striking Rock, who had made a joke about his wife, Jada Pinkett Smith, and said it would launch an inquiry.

Later in the day, Smith gave a stronger apology than he did in his best actor acceptance speech, which notably hadn’t included an apology to Rock.

“Violence in all of its forms is poisonous and destructive,” said Smith in a statement issued by his publicist and posted on Instagram. “My behaviour at last night’s Academy Awards was unacceptable and inexcusable. Jokes at my expense are a part of the job, but a joke about Jada’s medical condition was too much for me to bear and I reacted emotionally. I would like to publicly apologize to you, Chris. I was out of line and I was wrong. I am embarrassed and my actions were not indicative of the man I want to be. There is no place for violence in a world of love and kindness.”

The 53-year-old actor added apologies to the film academy, producers of the telecast, attendees, viewers and the Williams family. Smith was honoured Sunday for his role as Richard Williams, father of Venus and Serena, in “King Richard.”

“I am a work in progress,” added Smith.

After calling a board of governors meeting Monday to discuss the incident, the film academy said that it review Smith’s actions and “will explore further action and consequences in accordance with our bylaws, standards of conduct and California law.” The Los Angeles Police Department said Sunday it was aware of the incident but was not pursuing an investigation because the person involved declined to file a police report.

Indigenous delegates who have travelled to Rome to meet with Pope Francis are to get a private tour of the Vatican Museums today.

The ethnological museum includes the Vatican’s collection of Indigenous artifacts, some which have not been seen publicly.

Indigenous curators and experts have said they have been unable to get access to the unknown number of objects in the Roman Catholic Church’s possession.

Métis National Council president Cassidy Caron says she expects not only an apology — but access to the objects. She says they are important parts of Métis history.

The Vatican says parts of its collection were gifts to popes and the Catholic Church. In 2019, the Pope committed to putting many more objects on display, including those of Indigenous people.

The collection in the Anima Mundi Ethnological Museum is known to contain masks, wampum belts, pipes and rugs, as well as other items from Indigenous communities in North America.

Indigenous experts have said they don’t have details of the items that have been identified or any idea of how many remain unknown.

Many objects were taken after the Canadian government outlawed cultural practices through the Indian Act in 1876. Ceremonial items and other important objects were seized, then sold, given to museums or destroyed.

This report by The Canadian Press was first published March 29, 2022.