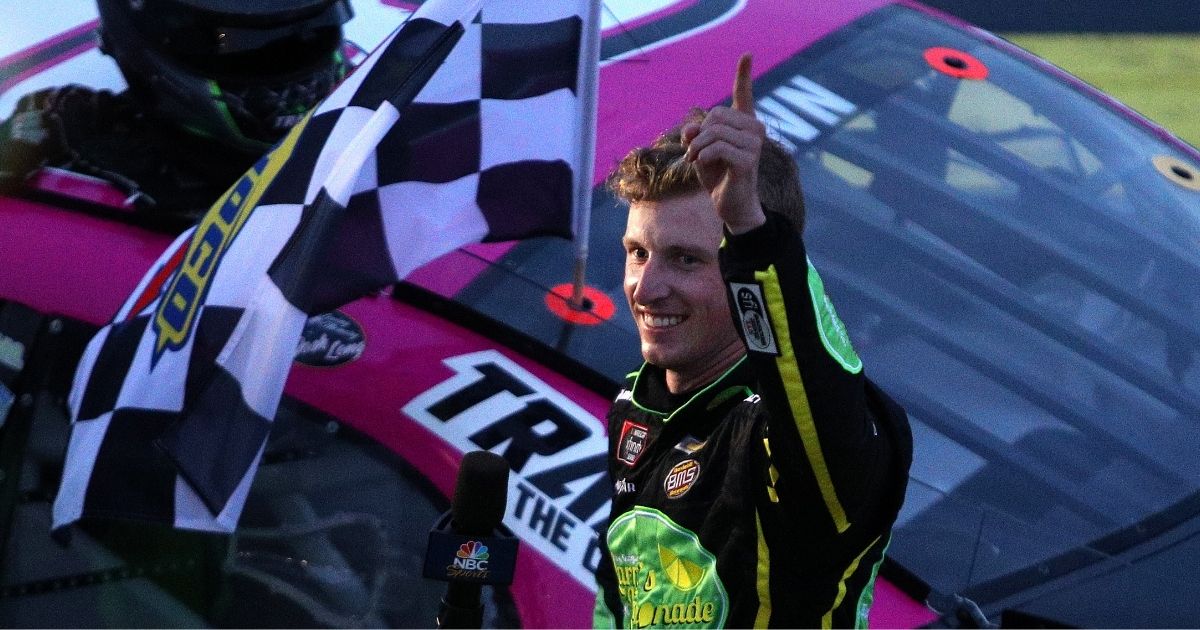 NASCAR has rejected a proposed sponsorship of driver Brandon Brown because it is based upon the popular “Let’s go Brandon” chant deriding Joe Biden’s presidency.

Brown was inadvertently catapulted to fame in October when, while being interviewed after his first career win in NASCAR’s Xfinity Series, fans in the stands behind him began to chant “F*** Joe Biden.”

When the NBC reporter interviewing him told the world they were chanting “Let’s go Brandon,” a slogan was born that coupled politics with defiance of those who have tried to stamp out the phrase.

Brown capitalized on the craze by announcing a sponsorship deal with the cryptocurrency LGBcoin on Dec. 30.

I’m excited to welcome @LGBcoin_io aboard my No. 68 Chevrolet Camaro as our 2022 NASCAR Xfinity Series full season primary partner!

“Having the financial support of LGBcoin is incredible, especially at such a pivotal time in our team’s growth as we work to build to the next level of competition,” he said in a statement.

“From wondering if we would have the financial means to continue to compete, to my first major win (at Talladega no less), to becoming an unintentional meme, this past season was a rollercoaster,” Brown said. “The support of sponsors like LGBcoin empowers us to be as competitive as possible and I’m looking forward to competing hard on the track in 2022.”

On Tuesday, however, NASCAR told Brown’s team that despite what appeared to be an initial approval last month, the sponsorship was denied, according to The Washington Post.

Do you agree with NASCAR’s decision?

The Post quoted a NASCAR official it did not name as saying that in November, when discussions about the potential sponsorship were taking place, NASCAR would not allow any image or reference to the chant.

The official said the Tuesday decision was not a reversal because it was the first time any official ruling from NASCAR was issued.

NASCAR’s insistence that the final word on the issue has been spoken was not shared by James Koutoulas, LGBcoin investor and Typhoon Capital Management founder.

“So now it’s war,” he tweeted Wednesday morning as part of a series of comments on the NASCAR decision.

No reason has been given for the revocation. @stevephelps refused to discuss with the @LGBcoin_io team when offered via the team despite hundreds of millions of dollars in damages being caused by their early leak of the revocation. So now it’s war.

Bubba Wallace Weighs In on Rittenhouse Verdict, And It’s Exactly What You’d Expect

If @NASCAR refuses to allow @brandonbrown_68 his endorsement from https://t.co/E19vnSfuie for his 33 races this year, after zero sponsorships came in over the @NBC Let’s Go Brandon LIE, Patriots should cancel NASCAR!#CancelNascar https://t.co/ZdGL78w1NH

Racing News reported that Koutoulas said he might sue NASCAR.

Last month, Brown shared his thoughts about the chant that has been adopted by millions of Americans.

“I hear them, even if Washington does not,” he said in a Newsweek opinion piece.

Brown said he spent a lot of time during the past few weeks trying to understand why the chant became so popular.

After much thought, he came to understand that the slogan went viral as a way for struggling Americans to express their anger and disgust at the abysmal state of the nation right now.

“I understand that millions of people are struggling right now and are frustrated. Struggling to get by and struggling to build a solid life for themselves and their families, and wondering why their government only seems to make it worse,” he wrote. “People have a right to frustration — even anger.”

Brown noted he is a race car driver, not an activist.

He wrote that he had “no interest in leading some political fight. I race cars. I am not going to endorse anyone, and I am certainly not going to tell anyone how to vote.”

However, Brown added, “I’m also no longer going to be silent about the situation I find myself in, and why millions of Americans are chanting my name. I hear them, even if Washington does not.”