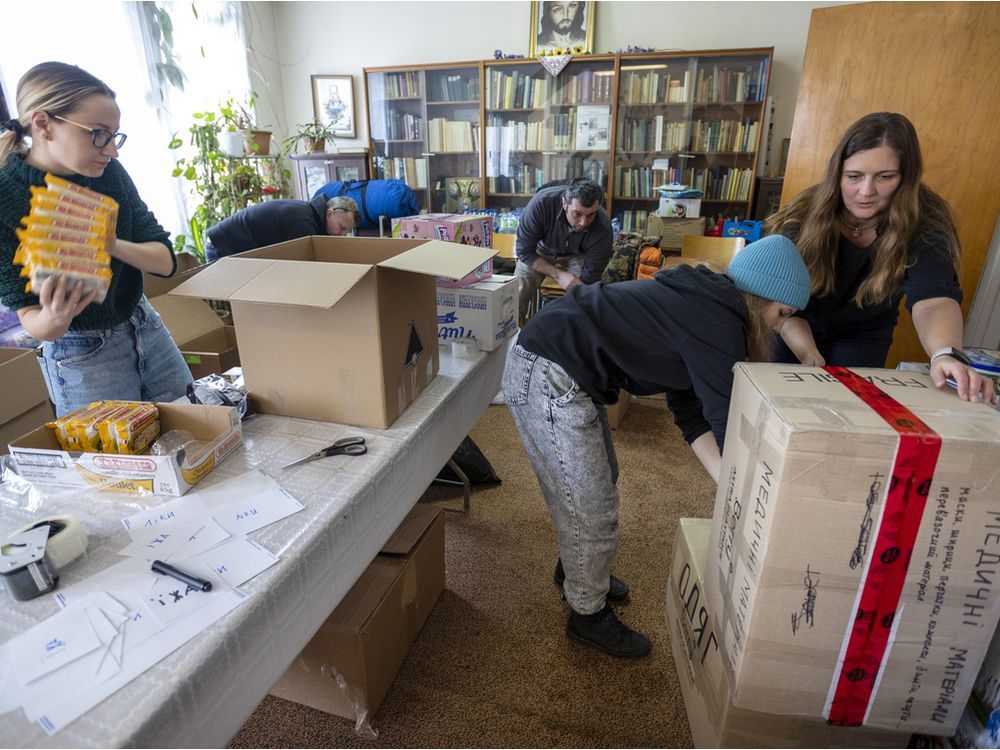 There was excitement at St. Michael’s Ukrainian church on a rainy, windswept morning in Montreal last week when a donation of highly sought medical supplies for Ukraine arrived.

A pair of volunteers dug into the items — scalpels, skin staplers, stitching equipment — carefully packing and labelling them in boxes bound for the next available flight to eastern Europe.

Donations have been pouring in to Montreal’s Ukrainian churches since Russia invaded Ukraine one month ago. The churches have divided the tasks: some are collecting items destined for the front lines, others are preparing gifts for refugees who arrive in Canada.

But organizers say they are facing logistical hurdles, including the prohibitive cost of air transport, in getting the materials to the people in need.

Hanna Tatsenko and fellow volunteer Marta Zybko are trying to figure out a way to get the items to Poland, which neighbours Ukraine. Tatsenko has worked in logistics both in Canada and Ukraine while Zybko has worked in finance.

“This is where it gets tricky — the whole shipping idea,” Zybko said.

Both women had a phone to their ears constantly during a recent visit to the church. Zybko has been trying to coax different organizations, foundations and levels of government to help to offset extremely high air freight costs.

Tatsenko said the quickest way to get the goods to Ukraine is a flight to Warsaw from Montreal, something they’re hopeful can happen in the coming days. The churches have moved items on flights out of Toronto and Halifax, but there’s a cost associated with getting the goods to those cities.

“We’re trying to help people; we’re trying to make a difference inside the country,” Tatsenko said. “That’s why it’s so important to get things by air freight. Medications — people need that now.”

According to the United Nations High Commissioner for Refugees, more than 3.7 million refugees had fled Ukraine as of Thursday, with another 2 million displaced within the country.

St. Michael’s is primarily concerned with getting items to people who need them the most in the embattled country.

“We started talking to volunteers in Europe, in Poland, in Ukraine, telling them, ‘Guys, what do you need?’ ” said Tatsenko, a member of Montreal’s Ukrainian community and volunteer at St. Michael’s.

“We collect the information from different regions in Ukraine; we work with volunteers. We’re trying to concentrate on what is a necessity: stitching materials, blood-stopping medications, bandages.”

St. Michael’s priest Yaroslav Pivtorak was hard at work loading a truck, aided by his son and a few other volunteers. Through a translator, he said he sees the church’s efforts as complementary to the work of humanitarian organizations.

Next to him, in the church nave, pews were packed with cases of non-perishable food, diapers, baby formula, pull-ups and women’s hygiene products. All that stock was in addition to a warehouse full of donations near Montreal’s Trudeau Airport where nearly 100 pallets of goods were stored.

Experts who study humanitarian crises say balancing cash and goods is important when it comes to sending aid because it helps avoid waste, as many items often aren’t used. The need for goods can change quickly and cash offers charitable organizations more flexibility to meet needs.

Zybko said items that arrive in Poland are vetted by people on the ground in close contact with Montreal’s Ukrainian community.

“This is co-ordination with the Ukrainian government representatives,” Zybko said. “We know these items go from Poland to Ukrainian trucks to selected big cities who send it to surrounding villages.

“The short answer is, it would be easier (with cash), but there’s so much need right now.”

Amid a space crunch, Zybko said the church has stopped collecting clothing, household items, toys and furniture and is asking donors to hold on to those items for when refugees arrive.

Tatsenko was born in Ukraine and came to Canada more than a decade ago, but her close family remains there.

“Thank God that where they are right now, there’s no active fight, so they are relatively safe,” she said.

“But I just want to help people because there is no difference between relatives and non-relatives. That’s our home country; we want to help our people.”