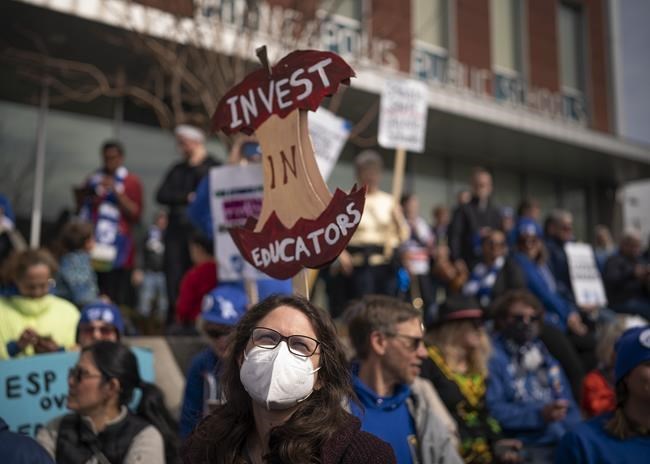 MINNEAPOLIS (AP) — Teachers in Minneapolis reached a tentative agreement early Friday to end a more than two-week strike over pay and other issues that idled some 29,000 students and around 4,500 educators and staff in one of Minnesota’s largest scho

MINNEAPOLIS (AP) — Teachers in Minneapolis reached a tentative agreement early Friday to end a more than two-week strike over pay and other issues that idled some 29,000 students and around 4,500 educators and staff in one of Minnesota’s largest school districts.

The union for teachers and support staff planned to announce details later in the day, but the union said it achieved what it sought when its members walked off the job March 8 after they were unable to agree on a contract with district leaders. Ratification votes were expected over the weekend, and the district said it “looks forward to welcoming students and staff back to school on Monday.”

“These historic agreements contain important wins for our students and the safe and stable schools they deserve,” the Minneapolis Federation of Teachers and Education Support Professionals said in a statement, adding that “major gains were made on pay for Education Support Professionals, protections for educators of color, class size caps and mental health supports.”

The walkout sent families who had endured the most chaotic days of the coronavirus pandemic fretting anew about lost academic progress and scrambling to arrange child care.

Minneapolis Public Schools administrators and school board members insisted throughout the talks that they didn’t have enough money to meet teachers’ demands, especially for large permanent salary increases.

“We walked out united to change the trajectory of MPS and ensure that educators have a greater say in how we do our work,” the union said. “This too has been achieved and will have impacts that improve our district for years to come.”

Teachers in neighboring St. Paul reached a tentative agreement the night before the Minneapolis teachers walked out, getting a deal that had some similarities to what their Minneapolis counterparts were seeking. Union leaders cited that as evidence that Minneapolis administrators had room to compromise, too.

Ben Polk, a special education aide, said he was relieved at the settlement but wanted to see terms before he commented further. Polk said earlier in the strike that understaffing meant aides like him were having to attend to too many higher-need children at once, making it more difficult for both teachers and students.