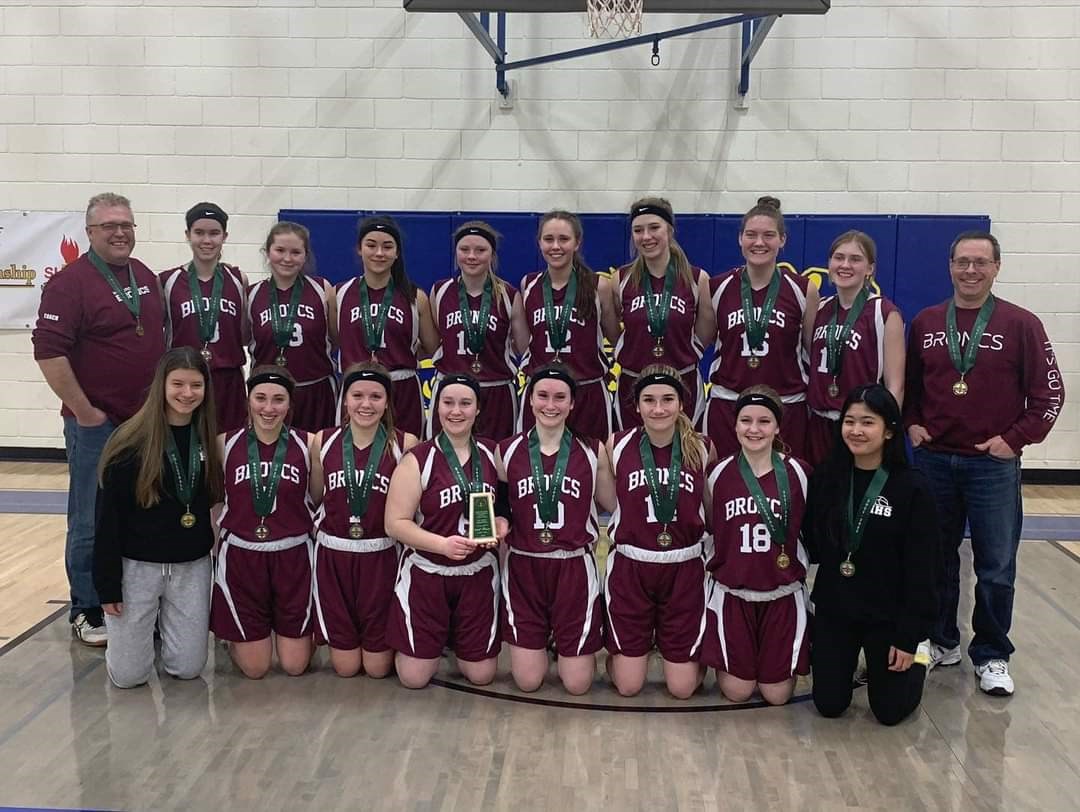 Until 2022, the McLurg High School girls’ basketball team has never made it to a provincial gold medal game – this year they did, bringing home silver medals after losing the final to a dominant Wynyard team. McLurg has only been at Hoopla once before, in 2012, when they won the bronze medal.

With Wynyard winning their semi-final over Norquay 75-42 and then the gold medal game over Wilkie by a score of 81-43, a more exciting game was the semi-final March 25 between Wilkie and Moose Jaw Cornerstone.

Although Moose Jaw was leading through much of the first half of the game, and was in the lead at the end of each of the first three quarters, 20-1, 34-30 and 52-49, multiple lead changes throughout the fourth quarter kept Wilkie fans, whether in the gymnasium at Wynyard cheering their team on or at home watching the livestream, on the edge of their seats. Wilkie took a 63-56 lead late in the game and held on for the 63-60 victory, qualifying them for the gold medal game the next day.

Coach Mark Myszczyszyn agreed the game “was very exciting” and added it was “closer than I would have liked but it was clear that their players were gassed at the end and struggled to keep up the pace. Our large bench this year allowed us to win several games in the last quarter because of our ability to sub in fresh players more often than others.”

The depth of Wilkie’s bench can be detected from the scoring statistics. Jaymie Myszczyszyn was the top scorer for McLurg with 15 points, and Brooke Bannerman was close behind at 12, but seven other players contributed to the total. Cornerstone’s points came from only five players – as opposed to McLurg’s nine – and 21 of those were courtesy of their top scorer, Kenzie Behrns.

In the gold medal game March 26, Myszczyszyn played every player dressed for the game. “In the last two minutes our Grade 12s battled hard and did not give up any more points in the game … I’m very proud of how hard our girls can battle. We didn’t have close competition many times this season so it can be hard to know how they will react when we do face adversity. I am very proud of how they competed and you have to give credit to a team like Wynyard.”

With their top scorer putting up 28 points, Wynyard led the gold medal game from the start, with the score at the end of the first quarter 23-12. Wynyard won the game with a final score of 81-43.

The stats from this game mirrored the stats from the semi-final, with Jaymie and Brooke putting up 12 and eight points respectively, and again another seven players helping out the cause. The Wynyard Bears also had depth with a total of 10 players putting points on the board.

In a close match for the bronze medal, Moose Jaw Cornerstone beat Norquay 45-41.

Looking forward, Myszczyszyn said, “this is just the beginning. I have no double we will have battles in the future and we will be back at Hoopla again. My seniors [Amy Gruber, Jaymie Myszczyszyn, Emma Kowalchuk, Sarah Karstens, Jayna Bottorff and Emmie Suchan] that are leaving are excellent players but I will be filling some spots with a very talented and accomplished group that just about won gold over JP [John Paul II] this year.”