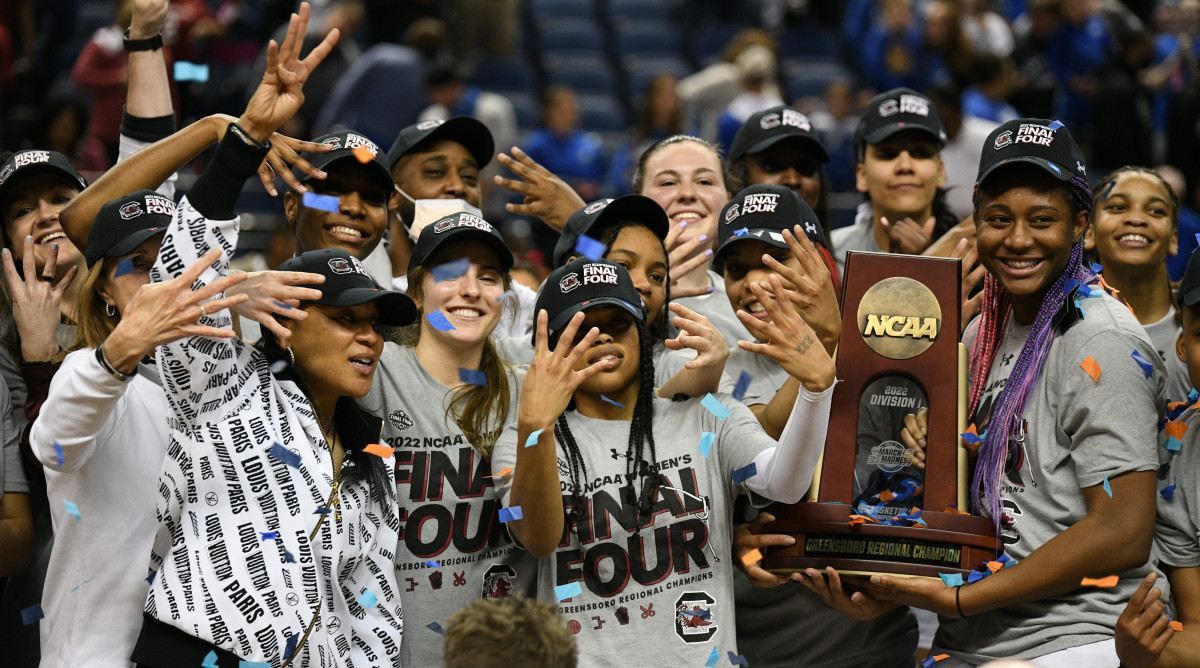 GREENSBORO, N.C. — No. 1 South Carolina heard the conversation about its offense. It saw the questions about whether its shooting might be too shaky to last through a championship run; it noted the reaction to its lackluster second-round win over Miami.

So it offered the best rebuttal it possibly could have Sunday in the Elite Eight: You wanted to see offense from these Gamecocks? Come take a look.

With its best offensive performance of the tournament so far by a wide margin, South Carolina dismantled No. 10 Creighton, and its reward is a trip back to the Final Four. The 80–50 win represented a total shutdown of a Cinderella whose run had been based on its own crafty scoring approach—and a look at just how fearsome the top overall seed can be when everything is clicking for them.

“It shows that everybody is ready to step up at any time,” said Gamecocks star junior Aliyah Boston. “Everybody did a great job scoring… It’s like you can’t really stop that.”

That started early. The Gamecocks came out aggressive, driving heavily and creating plenty of opportunities for themselves, and they were rewarded by watching most of their shots fall: They shot 60% from the field in the first half. That included a nearly flawless stretch in the second quarter when they blew the game open with a 19–2 run.

It was a marked change from recent performances. After four consecutive games of shooting at or below 35%, South Carolina finished Sunday with a field-goal percentage of 51%, highlighted by Boston, who was 7 for 9 from the field and led all scorers with 19 points. (Who else?) Yet she was just one piece of a roster that was firing on all cylinders. Guards Destanni Henderson and Brea Beal had 12 points apiece and Victaria Saxton added 11—just the seventh time all season that the team had four players in double figures.

Much of that scoring ability stemmed from the Gamecocks’ size advantage. While that’s a factor in just about every game they play—reflected in their stellar defensive record—it was especially notable on Sunday. Boston is 6′ 5″ and Saxton 6′ 2″; South Carolina also got significant time off the bench from Kamilla Cardoso (6′ 7″) and Laeticia Amihere (6′ 4″). Meanwhile, Creighton doesn’t have a player over 6′ 1″. Throughout the night, South Carolina made that differential a problem, on both ends of the floor.

The Bluejays tried crowding Boston as much as they could. Yet even in double coverage, the forward is a force to be reckoned with, and putting so much focus on her only created opportunities for the Gamecocks’ other bigs. (That was especially true for Saxton, who recorded her first double-double of the season, with 11 rebounds alongside her 11 points.) South Carolina had expected that—and the team was ready for it.

“We know that they’re not going to rotate over, because they’re going to lean heavy on keeping two people on Aliyah,” explained Gamecocks coach Dawn Staley. “It made it a lot easier for us to make decisions and make baskets.”

Defensively, South Carolina was its typical stifling, assertive self. Creighton’s offense can be difficult for opponents to prepare for: The team features plenty of ball movement, with the top assisted shot rate in the country, and it’s lethal from beyond the arc. But those skills cracked early against high pressure from the Gamecocks. And if there had been any hope for trying to create second-chance points by working the glass—well, there shouldn’t have been.

“I feel like there were times where we had all five blue jerseys in the paint going after boards and they still somehow came out with the rebound,” said Creighton guard Lauren Jensen. “They’re just a solid, tough team.”

South Carolina outrebounded Creighton 43 to 23. And that was without its typical performance on offensive boards—when a team has so many of its shots going in, after all, there are fewer opportunities for those. (The Gamecocks finished with 12 offensive rebounds Sunday, below its season average of 17.) That helped contribute to something unusual for South Carolina: It was the first time Boston finished without a double-double since November. It ended a 27-game streak that broke program and conference records.

Given the circumstances, however, she had no complaints.

“We’re on to the Final Four,” Boston said. “As the streak ends, it’s all right.”

It is the first time that the Gamecocks have made back-to-back Final Fours under Staley. But they’re not content to leave it there: After coming up just short of the title game last year, they’re ready to press for more this time. And their performance Sunday was their best demonstration yet of how they could make it happen.

“Just know that we still have unfinished business,” Henderson said. “Take in the moment right now and be happy for how far we’ve come. But we’re not done at the end of the day.”

• Stanford Beats Texas, Will Defend Title in Final Four
•.UConn Locks in to Dispatch Indiana and Prove ‘Elite’ Once Again
• Move Over, Cinderella: A Blueblood Final Four Is Here in the Men’s Tourney