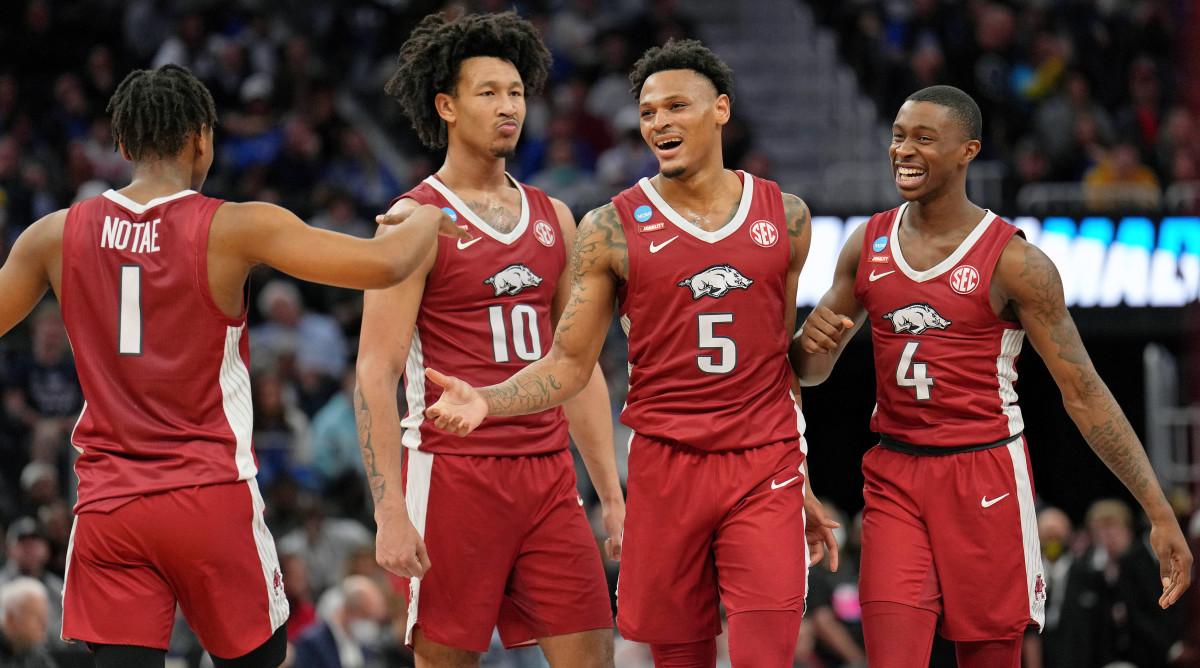 Lost in the chaos of two No. 1 seeds falling Thursday night were multiple herculean defensive efforts and a mind-boggling offensive spurt. The result? Two Elite Eight matchups of contrasting styles with a trip to New Orleans on the line.

With 49 points from its big three—Jermaine Samuels, Justin Moore and Collin Gillespie—No. 2 Villanova neutralized Michigan center Hunter Dickinson, limiting him 15 points on 16 shots on the way to a 63–55 win. Dickinson was coming into the game averaging 24 points a game in the tournament for the No. 11 Wolverines.

The Wildcats will have to extend the defensive pressure to slow Houston’s Jamal Shead, who tactically dismantled No. 1 Arizona’s defense Thursday, posting 21 points, six assists, four rebounds and two steals to lead No. 5 Houston to a 72–60 win.

Villanova turned the ball over just seven times in its win over Michigan, a trend that will need to continue Saturday since the Cougars are, arguably, the best team in the field at making teams pay for their mistakes. Houston scored 24 points off of 14 turnovers in its win over Arizona.

While the Cougars and Wildcats prepare for a defensive showdown in San Antonio, No. 4 Arkansas will have to find new motivation against No. 2 Duke in San Francisco.

Fresh off a 74–68 shocker over No. 1 Gonzaga, Razorbacks coach Eric Musselman thanked everyone who said his team had no chance to knock off the Bulldogs. The good news for Musselman is they were wrong. The bad news, however, is he won’t be able to use that “against all odds” motivator come Saturday.

The Razorbacks’ secret, quite possibly the worst kept secret in March, is out. Their stingy defense held Gonzaga to just 68 points (its third-fewest point total this season) and forced the Bulldogs into 15 turnovers.

“It’s our fight, it’s our grit, it’s our never give up,” said Arkansas forward Jaylin Williams, who scored 15 points and grabbed 12 rebounds in the win. “No matter what we are down, no matter what it looks like for the offense on their side, we’re gonna keep on fighting no matter what.”

They’ll need that relentless mindset against a Duke team that shot 71% from the field in the second half to knock off No. 3 Texas Tech, 78–73.

The Blue Devils progressively matched and ultimately trumped the Red Raiders’ defensive intensity down the stretch; impressive considering most appointed Texas Tech the top all-around defensive team in the tournament.

The Razorbacks will have to contain Blue Devils point guard Jeremy Roach, who carried Duke down the stretch and grinded the Red Raiders all night with his elite combination of shiftiness, speed and three-level scoring ability.

• South Carolina’s offense still hasn’t completely clicked in the NCAA tournament. Emma Baccellieri explains why that doesn’t matter when Aliyah Boston is as unstoppable as she was in Friday’s win over UNC.

• Elite Eight–bound Saint Peter’s is the NCAA tournament’s greatest Cinderella ever. Kevin Sweeny takes us through a relentlessly tough team that keeps defying the odds.

• Coach K used some of his better work to lift Duke over Texas Tech, including an emergency zone that proved vital. Pat Forde on more Krzyzewski magic and a team that’s growing up.

• No. 2 Duke vs. No. 4 Arkansas: After taking out the No. 1 overall seed, the Razorbacks now eye a talented Duke team as their next potential victim. Arkansas has been strong on both ends of the court, but its defense was the star against Gonzaga. But the Blue Devils took on a strong defense in Texas Tech in the Sweet 16, which could make this a gritty matchup against the Razorbacks. 8:49 p.m. ET, TBS

• No. 2 UConn vs. No. 3 Indiana: The Hoosiers just scraped by in a one-point win over No. 11 Princeton on Monday, and they will likely have to fight until the end against the Huskies, too. Indiana turned the ball over 17 times against the Tigers. But UConn isn’t coming off its best showing of the season either, where the Huskies looked sluggish offensively and relied on the defense to carry them to the win. If neither side cleans things up, this could get messy. 2 p.m. ET, ESPN