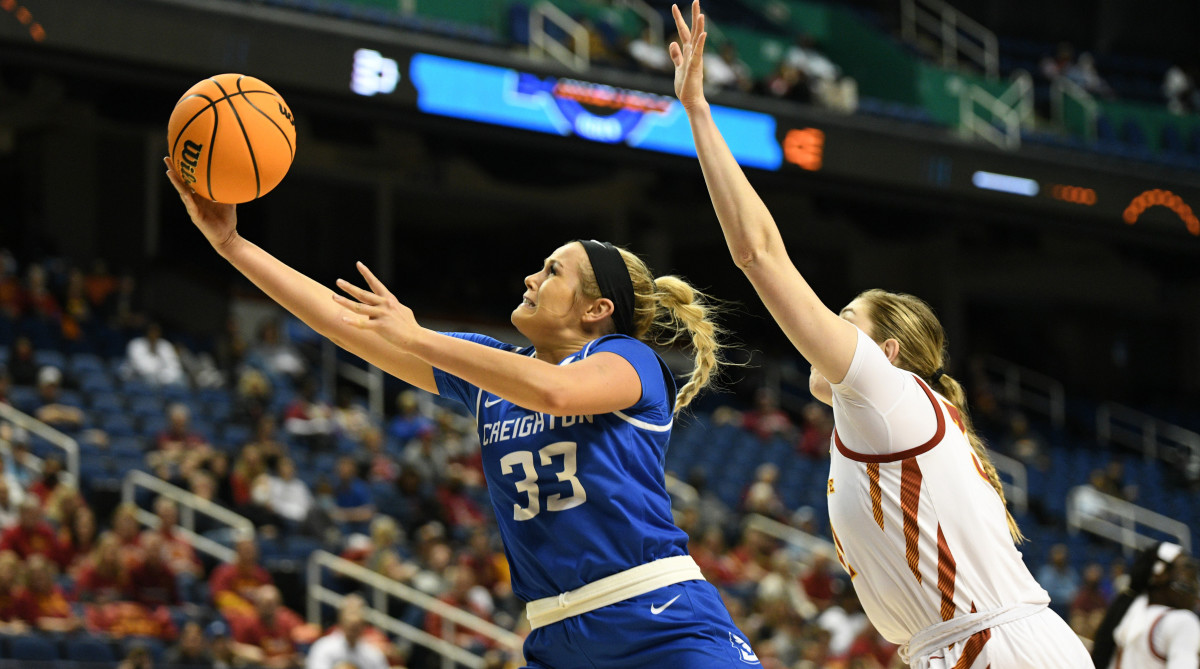 On Friday night, before No. 10 Creighton knocked out No. 3 Iowa State, the Bluejays took a few moments to watch the program that would await them if they won: South Carolina. The No. 1 overall seed was on the floor for the first game of the evening in Greensboro, N.C., and it was every bit as impressive as advertised—particularly with its power in the post from Aliyah Boston.

There was just one takeaway for Creighton:

“We all seemed so small,” Bluejays coach Jim Flanery said of his team compared to South Carolina. “Their post players—it’ll be different. We’ll have our work cut out for us.”

He wasn’t wrong. Much of that work centers on Boston—perhaps the most dominant player in the country. At 6’5”, she makes opponents feel every inch of her presence in the paint. (There’s a reason she led the nation in win shares this season.) But there’s also the board-crashing power of Victaria Saxton, who is 6’2”, and the bench threat of Kamilla Cardoso, who is 6’7”. That creates a notable size disadvantage for the Bluejays, whose roster tops out at 6’1”, with forward Emma Ronsiek.

So is there any chance for Creighton?

The team would like to think so. Yes, it’s a double-digit seed punching above its weight in the Elite Eight. But it’s also a tremendously capable offense that has proved itself in previous rounds. These Bluejays can be very hard to scout: They have a lot of depth, and with a five-out motion offense, their motion is difficult to anticipate. There’s a reason they have made it so far in the tournament. Their ball movement is astounding—they have the best assisted shot rate in the nation—and they have a fast-paced setup from the perimeter that can be difficult to prepare for.

Can they actually beat South Carolina? The odds are against them. There’s a reason these Gamecocks have been the best team in the country—their defense is impeccable. There is no better rebounding squad in the nation. Boston is a remarkable talent who is all but impossible to contain, and her supporting cast only makes things more difficult, with players like Saxton and guard Destanni Henderson. Yet Creigton’s offense still has the potential to push South Carolina—with a deep bench, playing at a fast pace and with the ability to move the ball all over the floor, it’s a serious power to contend with.

“They have some great offensive sets that we’re trying to prepare for,” South Carolina guard Zia Cooke said. “We just know defense is what’s going to win the game for us.”

“At this point, every team that we’re playing is really good, it’s just the seeding that’s different,” said junior forward Carly Bachelor. “So I think—just trying to keep that mindset of. ‘We made it this far.’ Why not us?”

• North Carolina State had lost in three straight Sweet 16 appearances. Ben Pickman explains how a philosophy adjustment and veteran leaders helped the Wolfpack finally break through to the Elite Eight.

• Villanova rolled past Arkansas into yet another Final Four appearance. Greg Bishop writes on how the Wildcats’ steady nature, lead by Jay Wright, helped them grind out the win.

• UConn cruised back to the Elite Eight. Ben Pickman on the Huskies’ sound defeat of Indiana, and what it means for the title hopes of Geno Auriemma’s squad.

• No. 8 UNC vs. No. 15 Saint Peter’s: The Peacocks are the story of the tournament, and they’ll be hoping their fairytale run can extend all the way to New Orleans. They’ll be going for a fourth straight upset, this time of Hubert Davis’s Tar Heels, who got hot at the right time. The winner has a Final Four date with Coach K’s Duke waiting in the wings.
5:05 p.m. ET, CBS

• No. 1 Stanford vs. No. 2 Texas: The rematch of November’s down-to-the-wire contest is sure to produce some Elite Eight fireworks. The Longhorns bested the Cardinal in Palo Alto in Round 1, but Stanford has lost just two games since. Can lighting strike twice for Texas, or will the Cardinal continue to cruise through the NCAA tournament?
9 p.m. ET, ESPN