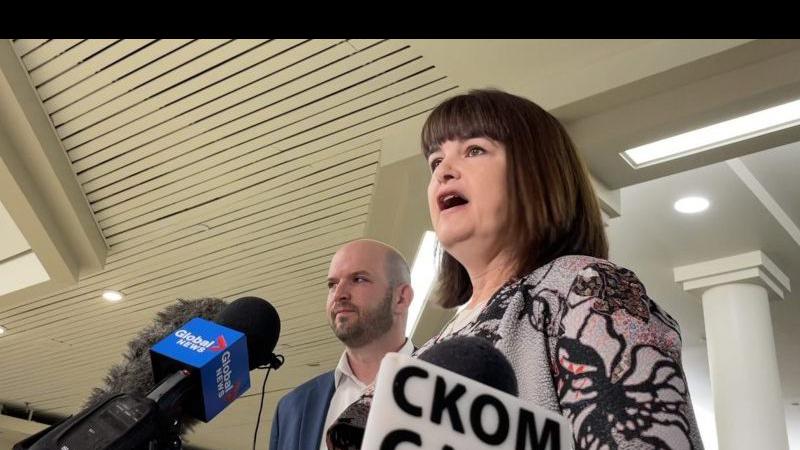 Beck said an increase to government funding could come from several places, like taxing revenue from the potash and energy sectors. Potash revenues, she said, were in excess of $1.9 billion at budget time.

“There were choices to be made in this budget. (There was) $17 billion of spending in this budget, yet we chose to underfund education,” she said. “This is a small, one per cent levy at a time when these are important industries in our province.”

Beck’s suggestion comes on the heels of an announcement by Saskatoon Public Schools that it plans to introduce a fee for lunchtime supervision for parents to pay in addition to staffing cuts. It’s part of the division’s efforts to make up a $4.5-million deficit. The division said funding from the provincial government has not kept pace with rising inflation rates.

Beck said schools need to pay for fuel in buses and more in-class supports for students, but per-student funding has been on the decline since 2013.

“That means that those kids who are graduating this year … have spent most of their time in school in an era of declining support,” Beck said.

The leadership candidate highlighted a need for speech and language pathologists, educational psychologists and counselling supports in school. She said the needs go well beyond simply maintaining teaching positions, which school divisions have had to prioritize.

“They’ve been cut back because the government has failed to properly fund our classrooms,” Beck said.

Love agreed, adding that other provinces have recognized the needs of students coming out of the COVID-19 pandemic and made plans for investment in education, while Saskatchewan’s government has not.

Beck said change in the province over the past six months and growing concerns around the cost of living are driving people to reconsider their political leanings.

“We’re hearing from people who haven’t seen themselves in our party in a very long time,” she said.

Beck said people will be looking for change in the next election, saying she is serious about doing the work and listening it will take to form a provincial government.

The NDP will choose its new leader at a convention June 26. Beck and Kaitlyn Harvey are looking to succeed Ryan Meili.