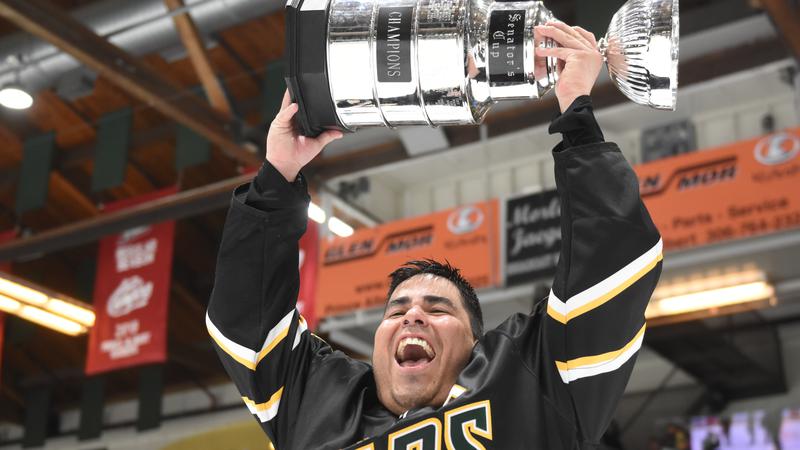 Heading into this year’s tournament, Korey Diehl had only touched the Senators Cup as one of the event’s key organizers with the Prince Albert Grand Council. He had transported the cup, presented to winners, and held it for promotional photoshoots, but he never held it as one of its winners.

After some second-place finishes and close calls, Diehl finally got to hold the cup over his head Sunday night at the Art Hauser Centre as his Peter Ballantyne Cree Nation Stars defeated the Sandy Lake Chiefs 2-0.

“Being an organizer and putting on events like this, it’s always nice that my staff support me. They know I’ve been trying to chase this, winning this little cup of ours here in the city of Prince Albert—the Senators Cup,” said Prince Albert’s Diehl. “We’ve had chances to win it. For them to support me and let me step away from that position to let me have this opportunity this weekend, I’m grateful for it and happy for all the guys.

In the final game, Stars forward Robbie Custer thought he broke the deadlock with 3:04 left in the second period, after putting the puck in on a wraparound. But instead, the officials sent Custer’s linemate Tyler Bird to the penalty box for goaltender interference. Just as the ensuing penalty was expiring down, Skylar Olsen stripped the puck in his own zone and found a streaking Darian Clarke for a shorthanded breakaway. Clarke scored with an accurate wrist shot, beating Chiefs goaltender Joe Young on the blocker side. That gave the Stars a narrow 1-0 advantage after the first period, which ended up being the game-winner.