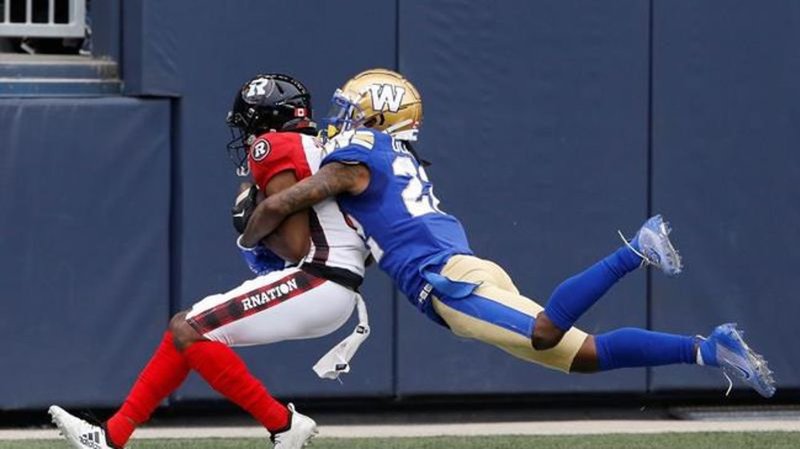 RCMP officers had carried the Grey Cup onto the field prior to kickoff, setting up the unveiling of the Bombers’ 2021 Grey Cup banner to loud cheers from the 26,002 fans.

Collaros completed 18 of 26 pass attempts for 188 yards and one touchdown.

Jeremiah Masoli made his Redblacks debut after signing with Ottawa (0-1) in February following his release by the Hamilton Tiger-Cats. He was 24 for 34 for 380 yards with one TD and one interception.

Brady Oliveira made his first start as Winnipeg’s No. 1 running back and had 10 carries for 17 yards.

It was the first meeting between the Bombers and Redblacks since Paul LaPolice, who left his position as Bombers offensive coordinator after the team’s 2019 Grey Cup victory, took the head coaching job in Ottawa.

Shaquille Johnson had a TD reception for Ottawa. Lewis Ward made three field goals from 17, 39 and 43 yards and was good on one convert. Winnipeg (1-0) also conceded a single.

Winnipeg got touchdowns from receiver Greg Ellingson and backup quarterback Dakota Prukop. Liegghio also made a 20-yard field goal and one convert.

A broken play helped set up the game’s first touchdown.

Collaros was under pressure and scrambled, then flipped a shovel pass to Oliveria for a 24-yard gain to Ottawa’s three-yard line. After a two-yard loss on an Oliveira run, Collaros connected with Ellingson for a five-yard TD at 8:44.

The Redblacks responded with Johnson getting behind coverage and catching a 20-yard pass in the end zone at 10:47.

The teams traded field goals in the second quarter, leaving the game tied 10-10 at 4:25. Ottawa went ahead when the Bombers conceded a punt single at 11:19.

The Redblacks missed opportunities to gain points in the first half. Receiver Jaelon Acklin dropped what could have been a TD pass, while the defence couldn’t hang on to a couple potential interceptions.

With 2:44 remaining in the third quarter, Masoli’s long bomb intended for Justin Hardy was picked off by Bombers defensive back Nick Taylor. The turnover fizzled for no points.

After a turnover on downs by Ottawa, Winnipeg marched the ball down the field for Prukop’s one-yard touchdown run. The drive was aided by a 27-yard catch by rookie Dalton Schoen.

Liegghio’s point after was wide to give the Bombers a 16-14 lead at 8:50 of the fourth quarter.

The Redblacks regained the lead with 3:30 remaining on Ward’s 43-yard field goal, a drive propelled by a 51-yard catch by Lievi Noel.

This report by The Canadian Press was first published June 10, 2022.