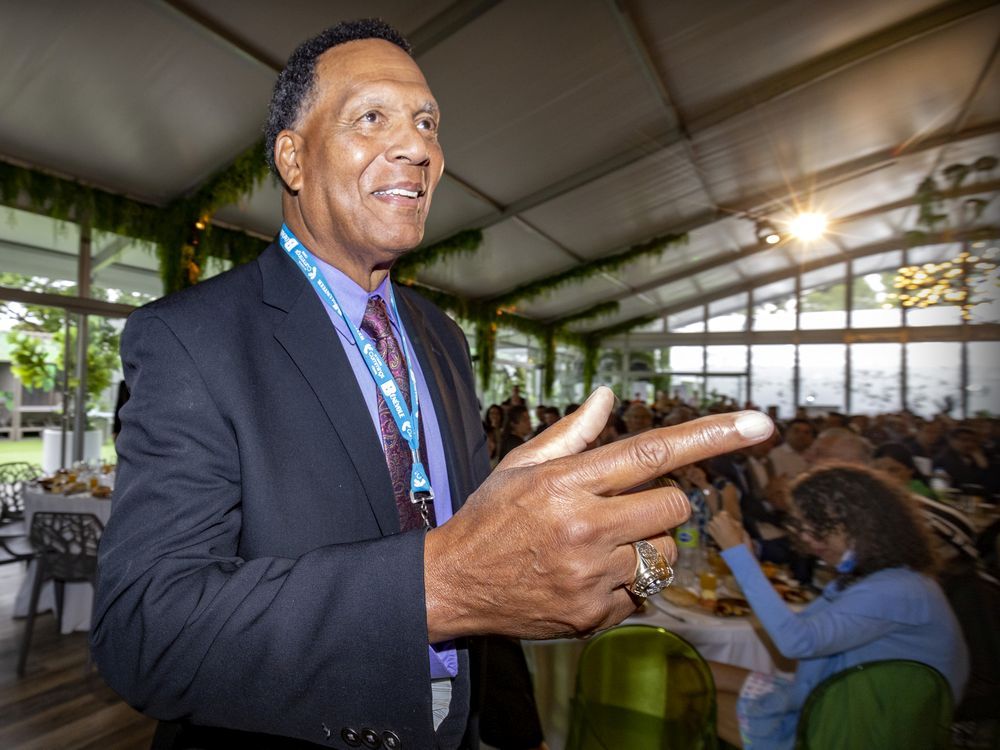 “I’m very humbled to receive this award after only playing for the Expos for three years,” Singleton said on stage after receiving the honour at Jardin Royalmount. “To be considered a legend in getting this award, I think part of this goes to hanging out with Pete Mahovlich after the games. You know, you can become a legend real quick hanging around with Pete.”

That line drew a chuckle from Mahovlich, a former Canadien who was in attendance at the breakfast.

“We had our fun back then,” Singleton said. “The only difference between then and now, we can’t stay out as late as we used to. That’s the thing.”

It was more than just enjoying the Crescent St. nightlife with Mahovlich in the early 1970s that made Singleton a deserving winner of the award.

The Expos acquired Singleton, an outfielder, in a blockbuster trade with the New York Mets on April 5, 1972, along with first-baseman Mike Jorgensen and shortstop Tim Foli, in exchange for outfielder Rusty Staub, who had become a star in Montreal, earning the nickname “Le Grand Orange.”

During his second season with the Expos, Singleton played in all 162 games, hitting .302 with 23 homers, 103 RBIs and a .425 on-base percentage. The Expos, in only their fifth season of existence, were in first place in the National League East in mid-September and plans were being made to expand Jarry Park for the playoffs. But the Expos ended up finishing with a 79-83 record and in fourth place, 3.5 games behind the Mets.

“It was really the first experience for an Expos team to be in the race that late in the season,” Singleton said. “To me, it was my my first real experience with being in a solid pennant race. Having such a good year — I think I finished in the top 10 in the MVP voting that year.”

The next season, Singleton struggled with a wrist injury and an allergic reaction to his uniform that limited him to 148 games, in which he hit only .276 with nine homers and 74 RBIs. On Dec. 4, 1974, the Expos traded Singleton and pitcher Mike Torrez to the Baltimore Orioles in exchange for pitcher Dave McNally and outfielder Rich Coggins.

Singleton would go on to play 10 seasons with the Orioles, making three All-Star Game appearances and going to the World Series twice, winning it in 1983. Torrez had a 20-9 record during his one season with the Orioles before getting traded to the Oakland A’s, while McNally and Coggins were both busts during the one season they both spent in Montreal.

The night before the trade, Singleton and Torrez were out in downtown Montreal together, heading back home around 2 a.m. Singleton’s phone rang at 6 a.m. with Torrez informing him he had been traded.

“I said: ‘Mike, oh man, I’m really going to miss you. Where are you going?’ ” Singleton recalled. “He said: ‘I’m going to Baltimore.’ I said: ‘We were talking about the Orioles last night They really have a great team.’ He said: ‘Wait, wait, you don’t understand. You’re going with me. … Within 10 minutes your phone is going to ring.”

Singleton retired after the 1984 season with the Orioles and then returned to Montreal, where he would spend 12 years as a colour commentator on Expos games, working with play-by-play announcer Dave Van Horne.

Singleton would then leave Montreal again to become a colour commentator for New York Yankees games and he spent 25 years in that position before retiring at the end of last season.

“It was tough getting traded because I loved Montreal,” Singleton said. “I got my first big year here and it really launched my career. But it also put me on the radar of the Orioles and when they had a chance to get me they made the trade.”

The 75-year-old Singleton — who looks much younger — is now enjoying retired life.

“I want to watch my grandkids play ball, watch my granddaughters play soccer and go to Florida in the winter-time and enjoy myself,” he said.

“I like that when I wake up in the morning the day’s mine to do what I want,” he added. “I couldn’t be here today if I was still working. I’d be in New York with the Yankees.”