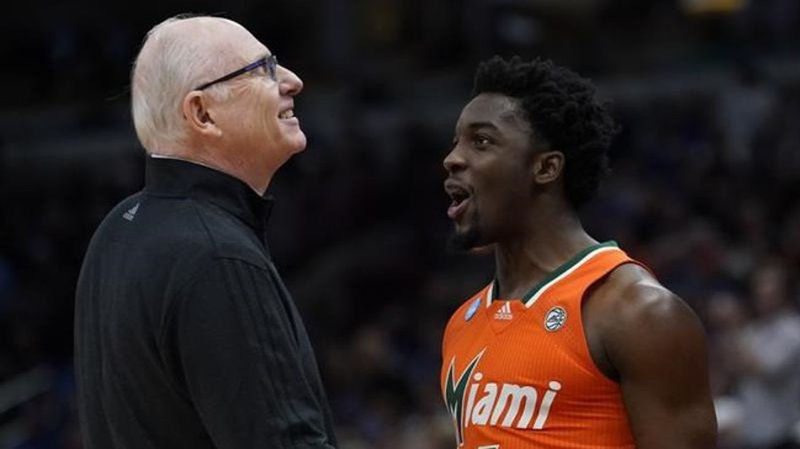 Remy Martin, the most outstanding player in the Midwest Region, finished with nine points and six rebounds for Kansas.

Kameron McGusty scored 18 points and Isaiah Wong had 15 for No. 10 seed Miami in the program’s first appearance in the Elite Eight. The Hurricanes (26-11) were bidding to get coach Jim Larrañaga back to the Final Four for the first time since he led 11th-seeded George Mason there in 2006.

McGusty spent two seasons at Oklahoma before transferring to Miami, averaging 13.5 points in four games against Kansas. And he looked comfortable playing against the Jayhawks again.

The redshirt senior guard scored 14 points to help the Hurricanes to a 35-29 halftime lead. But everything changed after the break.

With McCormack asserting himself inside and Braun and Ogbai picking up their play on the perimeter, Kansas outscored Miami 25-7 over the first 10 minutes of the second half.

Jalen Wilson made two foul shots and Agbaji connected from 3 to lift the Jayhawks to a 54-42 lead with 10:14 left. And the Big 12 champions just kept rolling.

The second-half numbers told the story of Kansas’ dominance. Miami shot 21.4% (6 for 28) after the break, compared to 59.3% (16 for 27) for Kansas. The Jayhawks also outrebounded the Hurricanes 25-11 in the second half. Wilson finished with 11 rebounds to make up for a tough shooting day.

Kansas improved to 6-0 in NCAA Tournament games played in the Windy City.

Miami: One of the Hurricanes’ biggest strengths in the tourney was their ability to generate turnovers, but they were unable to rattle the experienced Jayhawks. Miami finished with 14 turnovers, compared to 11 for Kansas.

Kansas: The Jayhawks improved to 44-16 in the NCAA Tournament under Self, but they are focused on winning the national title for the first time since 2008.