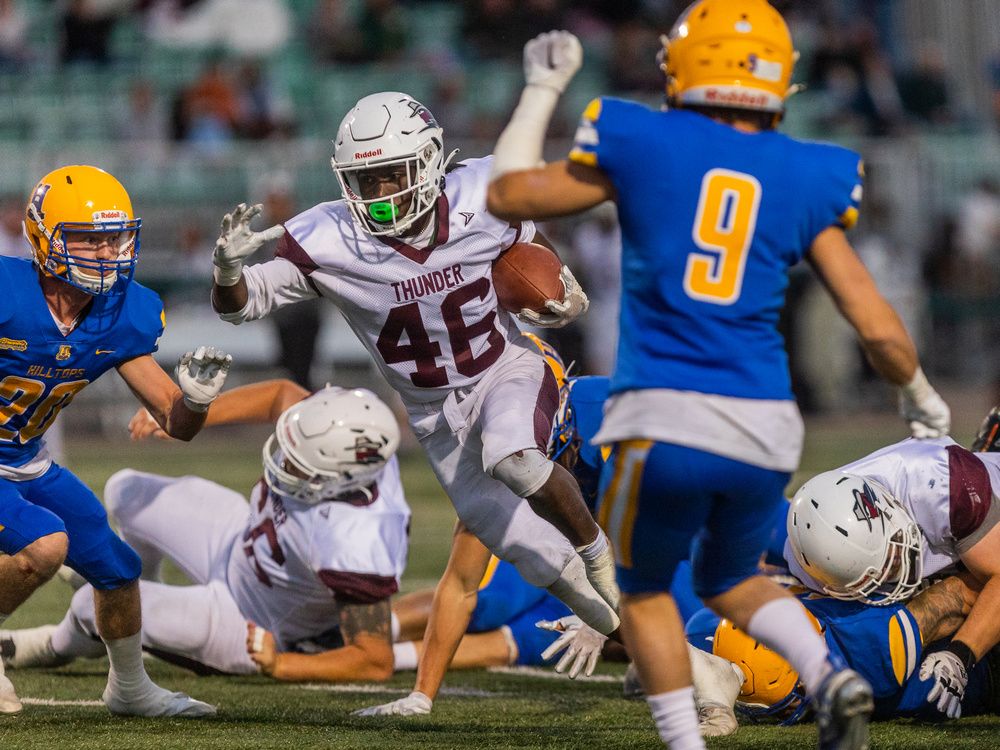 Uncharacteristically, both of those losses belong to the powerhouse Saskatoon Hilltops, who are 2-2 heading into their 1 p.m. Saturday clash in Regina with the host Thunder.

Later that day, at 7 p.m., the University of Saskatchewan Huskies and Regina Rams will meet to cap off a weekend that also saw the Saskatchewan Roughriders host the Edmonton Elks on Friday night.

Here’s some things to know as Saskatchewan’s first-ever Football Weekend takes over Mosaic.

Hilltops Trying To Stay Above .500

The Hilltops — who have won nine national championships since 2010 — are coming off a 29-21 overtime loss to the Thunder in Saskatoon, and suddenly find themselves at a break-even 2-2.

The last time Saskatoon lost more than two games in a regular season was 1993, when they finished 5-3.

The Thunder, meanwhile, are a perfect 4-0 after their come-from-behind victory over the Hilltops last weekend.

The Huskies and Rams are both 2-0 and ranked nationally — Saskatchewan is No. 2, behind Western, and Regina is No. 6.

The two Saskatchewan squads are the only unbeaten teams left in Canada West — a number that will be sliced in half Saturday night.

This is the first time the five Saskatchewan teams — Roughriders, Hilltops, Thunder, Rams and Huskies — have congregated in the same place for a formally designated weekend of football.

Bundled ticket packages covering off all three games were on sale as part of the weekend.

For Some, a Homecoming

A handful of Huskies hail from Regina and area, including starting quarterback Mason Nyhus, who leads the conference with 770 passing yards and seven touchdown tosses in his two games.

“It’s always a rivalry, and now they’ve added an extra component on top of it,” Huskies’ linebacker Lane Novak said after his team beat British Columbia 29-10 this past weekend. “I think it’s awesome — bring everybody together, make a full weekend out of it. I’m really, really looking forward to it. I’m a Regina boy originally, so I get to go home and play in Regina in front of family, in front of my friends.”

The Roughriders get a bye next week, but everybody else involved in Football Weekend is back on the field in short order.

This coming Friday, the Huskies will play in Alberta and the Rams at UBC. On Sunday, the Hilltops will visit Calgary and the Thunder will take on host Winnipeg.