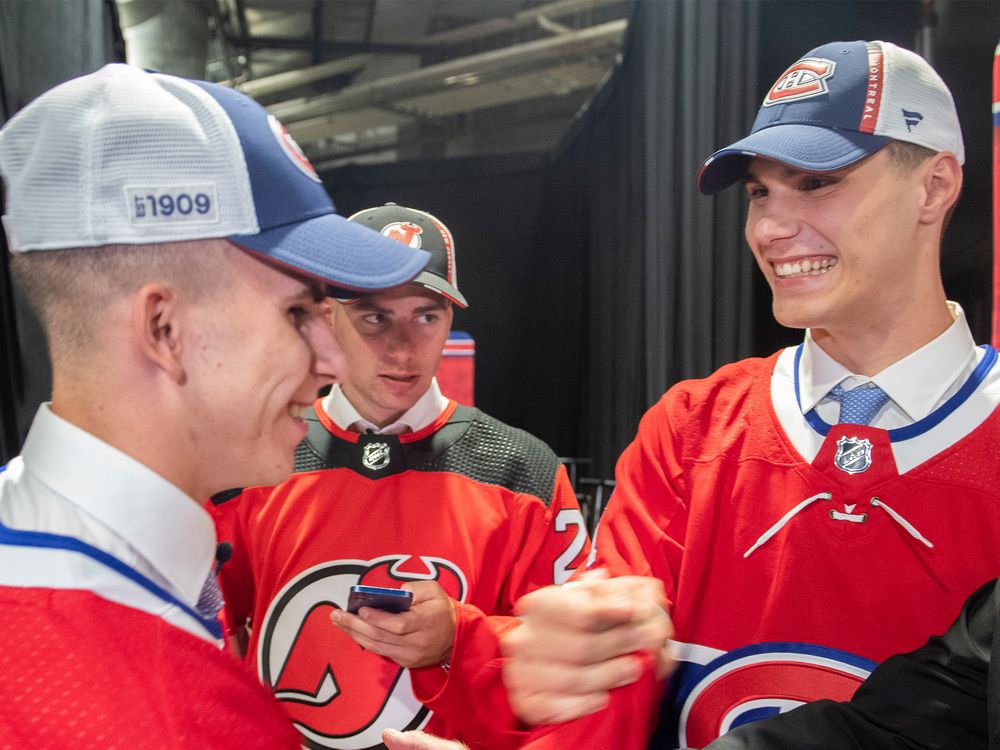 BUFFALO — Alexander Holtz scored his second goal of the game on a power-play 17 seconds into overtime to give the New Jersey Devils a 4-3 win over the Canadiens at the 2022 Prospects Challenge on Friday.

The Canadiens were nursing a 3-2 lead when Holtz scored his first goal at 18:14 of the third period and the situation went from bad to worse 22 seconds later when Ryan Francis went to the penalty box for slashing. That gave the Devils a 4-on-3 advantage going into overtime and they cashed in with a line of first-round draft choices and defenceman Simon Nemec, who was the No. 2 overall choice in this year’s NHL draft.

The next issue of HI/O: Montreal’s Road to the Cup will soon be in your inbox.

The Canadiens had taken the lead earlier in the third period on a goal by Owen Beck. He will be heading back to junior hockey later this month, but he’s determined to leave the Canadiens with a good impression

Beck took advantage of a turnover in the offensive zone and scored an unassisted goal at 8:59. Beck, who was a second-round pick (33rd overall) earlier this year, has goals in each of Montreal’s two games here.

“I wanted to come in here and make an impact and I felt I’ve done that,” Beck said. “I’ve done what I have a reputation for, which is to win faceoffs and play a strong 200-foot game and I’m trying to add to my offence, which a lot of people questioned last season.

“I’ve worked a lot on my faceoffs because that’s where it all starts,” Beck said. “You can’t do anything if you don’t have the puck.”

It appeared it might be a long night for undrafted goaltender Riley Mercer when the Devils opened the scoring on a power-play goal by Reilly Walsh at 2:02.

But defenceman William Trudeau scored midway through the period and first-round draft pick Filip Mesar scored a power-play goal late in the period to put Montreal ahead 2-1. It was the second goal is as many games for Mesar, who is hoping to play with Laval this season rather than head to the OHL with the Kitchener Rangers.

Late-bloomer Xavier Parent, who was one of eight undrafted players in the Devils’ lineup, scored the only goal in the second period to tie the game at 2-2. The Laval native is coming off a breakthrough season as an overage junior. He had 51 goals and 106 points with the Sherbrooke Phoenix. The 5-foot-8 winger was overlooked because of his size and he also missed half of his draft year with an injury.

On paper, the Montreal lineup was considerably weaker than the group that lost 4-3 to the Buffalo Sabres on Thursday.

Jordan Harris and Mattias Norlinder were the only defencemen who figure to be in the battle for a NHL job when the main training camp opens next week. The inexperienced defence corps was backed up by Mercer, an undrafted player who struggled last season in Drummondville.

Mesar was the only first-round draft choice in the Montreal lineup — the Devils dressed four, including their entire first line, and Nemec — and they had five undrafted players.

The Canadiens will practice Saturday and play their final game Sunday afternoon against the Ottawa Senators.