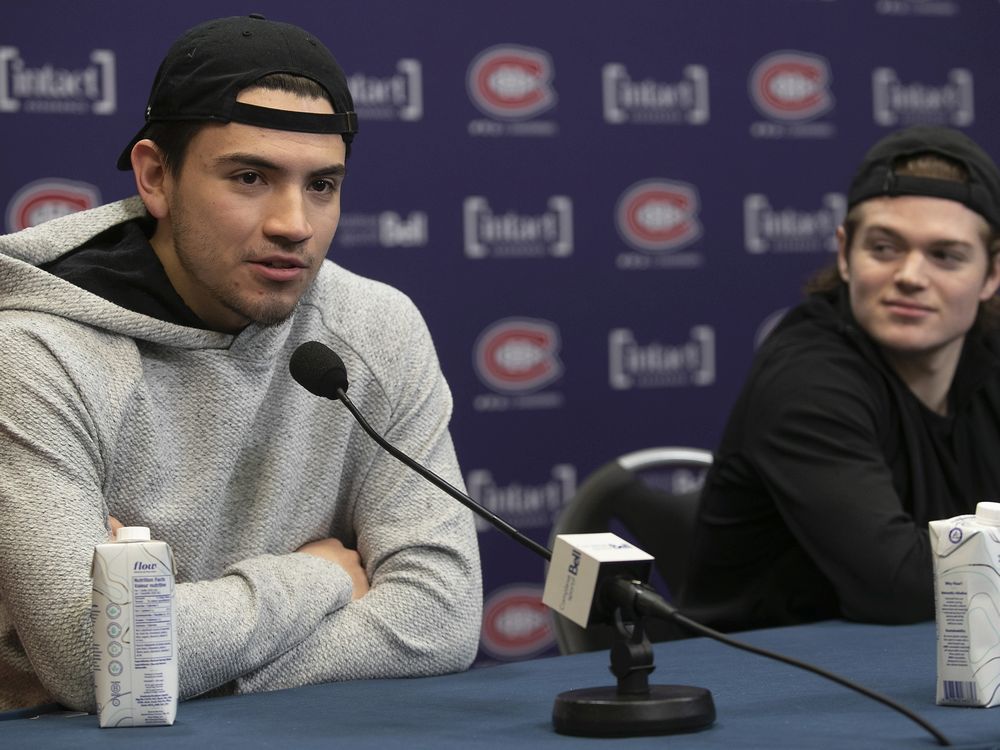 It’s fitting that Nick Suzuki and Cole Caufield were brought out together to answer questions from the media Saturday as the Canadiens held their post-mortem news conference in Brossard.

Suzuki, 22, and Caufield, 21, look like they will be the two key pieces to the future success of the franchise.

Suzuki led the Canadiens in scoring this season with 21-40-61 totals and Caufield led the Canadiens in goals and finished second in scoring with 23-20-43 totals. Both players flourished in the 37 games after Martin St. Louis took over as head coach. Suzuki had 12-22-34 totals with St. Louis behind the bench, while Caufield had 22-13-35 totals, including a hat-trick in Friday night’s 10-2 win over the Florida Panthers at the Bell Centre in the final game of the season.

Despite being so young, Suzuki and Caufield have both been able to shine under the very bright hockey spotlight in Montreal.

“For me, I think just embracing playing in this market,” Suzuki said. “It’s a special place to play. It’s an honour to play for the Canadiens. I think for (young) guys that come into the team realize that pretty quick in how much we mean to the whole province and the city of Montreal. It’s a lot of fun playing here and just to embrace the passion that the fans have for us. You got to work every day to make them happy.”

Caufield said the key is not to let the “outside noise” get to you in the hockey-mad Montreal market.

Both young players were invited to play at the IIHF World Championship May 13-29 in Finland — Suzuki for Team Canada and Caufield for Team USA — but they both decided to take a pass so they can focus on getting ready for next season with the Canadiens.

Suzuki said he was dealing with a lower-back injury during the final weeks of the season, which is why he rarely practised with his teammates. He said he had no issue with his back during the last seven or eight games and it won’t be an issue when training camp starts next season.

Speaking of next season, Suzuki is one of the candidates to replace Shea Weber as captain. Weber spent all season on the long-term injured reserve list and it looks like his career is over, but the Canadiens didn’t name another captain. General manager Kent Hughes said he will attempt to trade Weber and the final four seasons of his contract, with an annual salary-cap hit of $7.857 million, during the off-season.

“I think for me I want to take a leadership role,” said Suzuki, who was an alternate captain this season. “I think I’ve tried to do a good job since I came to this organization. We have a lot of good candidates to be the next captain. Older guys that have been through a lot. But for me, I don’t really control any of that. Just the way I play, the way I handle myself with the team. It will be up to management probably to make that decision for next year.”

Caufield said he can see Suzuki as the captain.

“The way he handles himself in and out of the rink every day,” Caufield said. “He’s a true pro at such a young age and for sure he’s someone that I look up to. From day to day, he’s quiet around the room but he does the right things on the ice and I think that’s a good role in leadership is to have guys kind of see what he does and it kind of pushes it for the rest of the group. I think a lot of guys look up to him. They don’t look at his age at all. They just know the type of guy he is and he pushes the rest of the team.”

General manager Kent Hughes said Saturday the plan is to have a new captain next season.

“We have not had significant discussion,” Hughes said when asked about the captaincy. “I think (Martin St. Louis) has brought leadership to this team from a coaching standpoint and we’re going to continue to evaluate here over this off-season what the right situation is for a leader.”

Hughes added that management will look at what the roster is like before the start of next season compared to this season and analyze what the challenges will be for the new captain.

Veterans Brendan Gallagher and Joel Edmundson would also be strong candidates to be the new captain if management decides Suzuki isn’t ready yet. Management might also not want to put the added pressure of the “C” on Suzuki next season as he heads into the first season of his new eight-year, US$63-million contract with a $7.875 million salary-cap hit.

But Suzuki certainly looks like a future captain for the Canadiens.