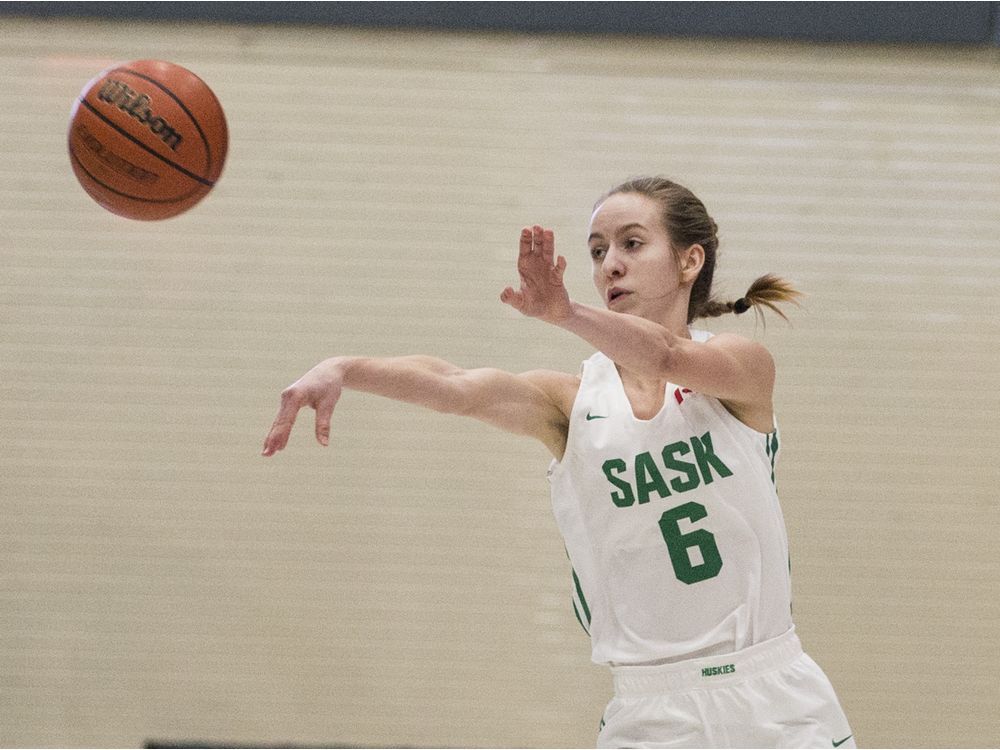 “There was a game two years ago in which she hit seven threes in a game. She is a pure shooter. She’s confident. She can miss a few but it’s not going to deter her from shooting next.”

“I’d say I’ve been quite fond of shooting threes all throughout my basketball career, throughout high school and even throughout the Huskies,” admits Philipenko, whose University of Saskatchewan Huskies are in Kingston, Ont., preparing to play in the U Sports Final 8 national tournament quarter-final Thursday night against the host Queen’s University Golden Gaels.

“I do like driving the ball, and dishing, and taking other opportunities as well, but I’d say I find a lot of satisfaction with shooting threes.”

Philipenko shoots, and when she does, she often scores.

The Kinesiology student, who is in her fourth season and fifth year with the Huskies program, knocked down 31 of 75 three-point attempts for an impressive 41.3 per cent clip in the Canada West this season.

Yet, on a team with the likes of Summer Masikewich, Libby Epoch and Carly Ahlstrom, Philipenko sometimes fly under the radar.

She can be somewhat of a secret weapon on a team with so many weapons.

If you’re looking for a potential X-factor on the defending U Sports women’s basketball champions, Philipenko may be that player.

“A lot of the focus is on Summer and Libby,” acknowledged U of S head coach Lisa Thomaidis, whose team won the last U Sports women’s basketball title in Ottawa, Ont. on March 8, 2020, just before the COVID-19 pandemic shut down the sporting world.

“So for her, she’s played a supporting cast role for the last number of years and this year she’s stepped up and played a bigger role. She’s being relied on for her defence, her scoring, her perimeter scoring. She’s just kind of unassuming, right? She just kind of gets the job done. She goes out there, works hard. She’s definitely an important player on this team.”

Indeed, Philipenko has taken a bigger role on the Huskies this season, starting 14 of 16 games. She averaged 8.6 points, 1.6 assists and 1.7 rebounds per game to go along with 27 steals and three blocked shots.

“She’s a good on-ball defender,” noted Thomaidis. “The big thing is her three-point shooting. She can get hot. I think there was a game two years ago in which she hit seven threes in a game. She is a pure shooter. She’s confident. She can miss a few but it’s not going to deter her from shooting next.

“I think part of her game that she doesn’t go to, but she can do, is she can attack the hoop. She can get there. She is quick. She does have a quick first step and she has that shot that’s a weapon that everyone’s trying to take away.

“We’ve been really trying to encourage her to continue to attack. She can make things happen at the offensive end when she gets on the floor.”

Philipenko was on that Saskatchewan team that won its second Bronze Baby and national title two years ago. She says this year’s team has a lot of similar players and many of the same players from the team two years ago, so they’ve been “carrying a lot of our experience from that team” onto this team.

“We definitely have multiple weapons and I think we have a really deep bench this year, as well,” she said. “We all bring different experiences and different skills to the team, which can be really hard to defend.

“We have a strong team and I think it will be really good to play against some tough competition and different teams.”

Philipenko began playing basketball at St Luke elementary school. She played for Lakeridge in the Saskatoon Minor Basketball Association and went on to play high school basketball for the Holy Cross Crusaders.

There have been plenty of shots and baskets over those years, especially those magical three-pointers. But that’s not all …

“Threes are definitely up there,” said Philipenko, “but I love how much of a team sport it is and how it’s so really fast-paced, with so much variety in the game.”