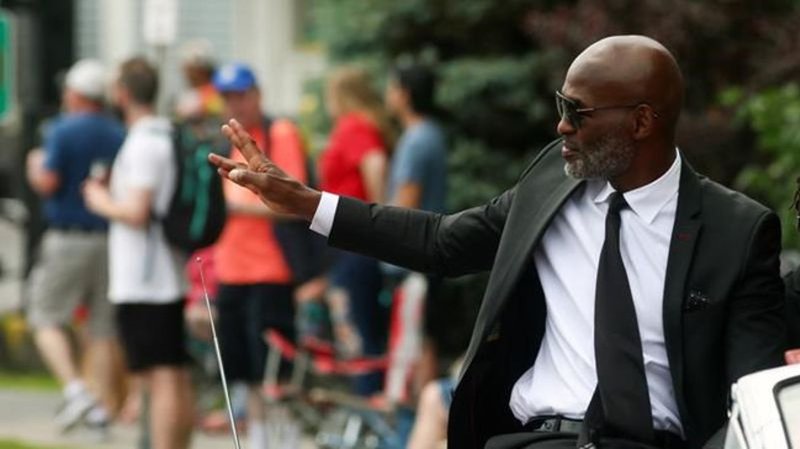 Also among those honored were the first female fighters — Christy Martin, Laila Ali, Lucia Rijker, Regina Halmich, and Holly Holm — to be enshrined. Martin shot to fame when she was featured on some of Mike Tyson’s fight cards in the 1990s. Induction came on her 54th birthday.

For Laila Ali, it was a return to where her career started — and against the advice of her famous father. She won her first match in October 1999 against April Fowler at Turning Stone.

“He told me not to do it. I had to earn his respect in the ring,” said Laila, who retired unbeaten in 24 fights.

All but one of the 27 fighters inducted were scheduled to be at the ceremony. The one missing was former heavyweight champion Wladimir Klitschko. He’s in Ukraine helping his brother, Vitali, a Hall of Famer himself and now the mayor of the capital city of Kyiv, during the ongoing war against invading Russia.

Instead, Wladimir Klitschko, who was heavyweight champion for 12 years and 2 days, longer than anyone in history, and finished with a pro record of 64-5 (53 KOs), released two short videos on social media to acknowledge the honor.

“Thank you fans. I never ever dreamed of getting that far in the sport. Amazing,” Klitschko said. “Boxing just made me a better person, period. It taught me a lot.”

Although his videos were short, Klitschko made a point of criticizing fellow inductee Jones for traveling to Russian-occupied Crimea.

“So Roy, whose side are you on? ” Klitschko said. “I really respect you as a fighter, but I really question your moral compass.”

Jones had other things on his mind.