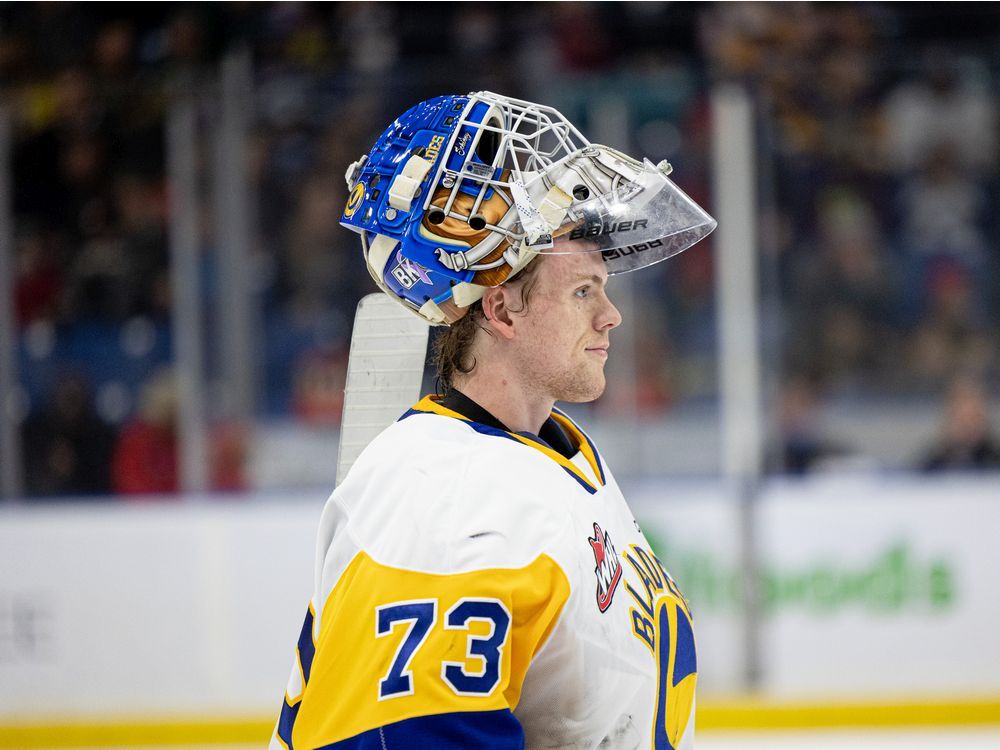 Nolan Maier still remembers when he was unceremoniously welcomed into the Western Hockey League by the Regina Pats.

He was a fresh-faced, 16-year-old goalie with wobbly, goal-padded shins and a trembling goal-stick when he faced the likes of future NHLers Sam Steel and Josh Mahura for the very first time.

The then-hapless Saskatoon Blades were in the early stages of rebuilding.

The Pats were loading up as Memorial Cup hosts that season.

It was on the road. Maier would turn out to be rookie roadkill.

“They were a really good team,” recalled Maier, who, five years later, is about to embark on the final stretch of his accomplished WHL career.

“I remember how nervous I was, just kind of freaking out. We ended up losing the game pretty badly. It was kind of a ‘welcome to the league’ moment for me.

“It was pretty intimidating, but at the same time, it kind of threw me into the fire against some really good teams in the division that year, so it was a pretty positive experience.”

Maier has parlayed that shaky first start into franchise-goalie status with the Blades.

He’s racked up 118 wins during the regular season, another six in playoffs and five in pre-season.

He has 10 career shutouts in the regular season and one in playoffs.

He’s just three wins away from becoming the WHL’s all-time leader for wins.

It’s been quite a five-year journey for the 21-year-old Yorkton product, whose timing was certainly right as a key piece of a rebuild.

“I think it kind of built me,” offered Maier.

“Playing behind a team that wasn’t necessarily as super-stacked and really skilled as some of the other teams we were playing all the time, and kind of going through that rebuild and not making playoffs, I was able to play a lot of games and get my reps in, touches in. I’m really grateful because most guys don’t get that opportunity as a 16-year-old, especially as a goalie. I was able to play every night and get those reps in so early.”

Maier was taken in the second round, 25th overall, of the 2016 WHL Bantam Draft out of Yorkton.

“We obviously believed in him,” recalled Blades associate general manager Steve Hildebrand, then an assistant GM.

“It was a pretty strong goalie year and I think, for me, it was him having the athleticism and his character … Obviously, you hope it turns out like this, but you never know.

“Obviously, he’s become very special and a big part of our organization, not only in the last five years but moving forward.”

Maier continues to be the veteran workhorse goalie on the Blades, who will host the Pats, and young phenom Connor Bedard, on Friday night. Game-time is 7 p.m. at SaskTel Centre.

“He’s a leader, he’s a pro, he’s a veteran — he is very important for us,” said Blades head coach Brennan Sonne. “He’s the backbone of the team and he does it right every way.”

Over five seasons, Maier has been fairly consistent while posting a 2.91 goals-against average, .905 save-percentage and 118-68-12-6 record.

“There are a few things technically they’ve worked on, with him and (goalie coach Jeff) Harvey,” noted Sonne.

“It’s not been easy for him, as even-keeled as he seems and all that. All this stuff that you (media) guys are talking about all the time, with records and all that stuff, that wears on you as an individual. I think he’s handled that very well. I think he’s handled that with class and professionalism and I don’t think it’s impacted him the way it may have somebody who is not as mentally tough.”

Indeed, Maier is cool as a cucumber.

If there’s pressure on him as somebody who’s got one goal-skate in the WHL record book and the other on the edge of the goal-crease, you wouldn’t know it.

Maier is just two victories away from tying the WHL career wins record and three wins from breaking it. Tyson Sexsmith and Corey Hirsch currently hold the record.

“It’s a huge honour just being mentioned with such big names,” admitted Maier. “It’d be a testament to how hard I’ve worked and how long I’ve been around and the time I’ve had in this league.

“It would be a pretty cool feeling and accolade for me and my family.”

Hildebrand said Maier “has probably done a better job of preparing himself, both on and off the ice” as he’s gone through the years.

“I know it’s tough when a guy like himself, and the numbers that he has, doesn’t get looks or tryouts in the NHL, but he just keeps forging ahead and believing in himself, and as we move forward here, I would hope that someone would take a look,” said Hildebrand. “I understand that he’s a little undersized (by NHL standards) but the game’s changing a little bit that way in net. I’m hoping that someone gives him a look because he deserves it.

“He gives us a chance to win every night and we feel good about that. That’s all you can ever ask from your goalie.”

Sonne believes Maier will get that pro shot.

“He’s going to have a ton of options,” said Sonne. “That’s my opinion.”

For his part, the 6-foot tall Maier says he hopes to be “playing pro hockey anywhere.”

“My goal is to sign a professional contract — that’s been the goal since Day 1 here,” said Maier, adding that school would be a back-up plan and something that his mom, a teacher, has “a pretty big influence” on.

“I don’t know for sure what’s going to happen and I don’t really worry about that right now. Honestly, I’m just getting prepared and ready for the playoffs here.”

And, don’t forget, playoffs were merely a dream five years ago.

What a journey it’s been.