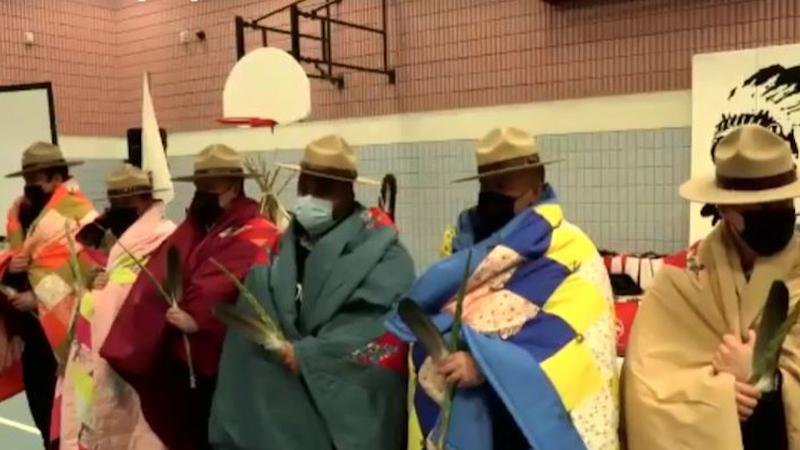 When officers searched the home, they found several firearms and prohibited weapons along with over 30 grams of crack cocaine, 23.5 grams of meth, over 100 grams of an unknown substance, drug paraphernalia and cash.

On Tuesday, the officers who carried out the search warrant and seizure were honoured at Kisikohk School in Witchekan Lake First Nation.

The event began with a traditional ceremony involving members of the First Nation and Elders standing side-by-side with RCMP officers.

Chief Annie Thomas of Witchekan Lake spoke about how drug activity has impacted not only her community but others across the province.

“We’ve seen the hurt in our communities and we’re burying more loved ones because of alcohol and drugs instead of natural causes like old age.”

During her speech she commended the RCMP and their relationship with the First Nation, saying both sides need to work together to eradicate the issue of drugs in the community.

“We need to work with them (RCMP), we need to do that so not only my grandchildren but yours as well can have their future. Their future is bleak and sometimes I cry because of what I see in my community.”

She added two of the four suspects arrested in the drug seizure were her son-in-law and his father.

She also reflected on her own journey with alcohol and how she overcame it. She has been sober since October 2015.

Nevertheless, she felt honoured to be a part of the ceremony to commemorate the work of police.

“Because we have a lot of work ahead of us. How we do it is to unite together because I know Witchekan is not the only First Nation community that has this drug problem and I also know that our mental health therapists that work in this community, serving this community are doing a tremendous job, not only working with adults but working with our children and youth.”

Commissioner of Treaty 6, Mary Culbertson, also spoke at the ceremony using the platform to recount how her ancestors put their trust in the RCMP when the Treaty was first signed.

“They said, ‘you must protect us. You have to protect our people from the whiskey traders, from settlers coming into our territory and ensure that our people are not molested or not bothered and not offended.’ We know that scenario changed drastically over the years. They took our grandparents and great-grandparents away to residential schools, they assisted in the apprehension of children from families, from homes and from nations.”

In her hometown she detailed the issues of overdose, family violence and disrespect for First Nation leaders, adding that RCMP in the past has failed to take action in many places to deal with these issues.

As she continued to speak, her countenance changed in recognizing the officers from Spiritwood who responded to the call and did what their ancestors asked RCMP to do many years ago: protect their people.

“When you have a community that’s trying to heal and you have an RCMP detachment and officers being kind, doing their jobs and working with their community and enforce what they may not know is a Treaty right, that’s what they were supposed to do. I hope to see more and more things in communities come like this, that the police actually helped us.”

The assistant commissioner for the Saskatchewan RCMP, Rhonda Blackmore, came to the podium next, saying at first she was pleased to receive a call from FSIN Chief Bobby Cameron inviting the RCMP to the ceremony.

She went on to say how significant a drug seizure like the one in Witchekan Lake can have a big impact on the community.

“Anytime we are able to disrupt the movement of illegal drugs and firearms within and amongst our communities, there is the potential that someone has been spared from victimization, harm, or even death.”

She added the Saskatchewan RCMP continues to dedicate time to mitigating and reducing harms caused by drugs and suppressing firearms and gang-related offences, sending a stern message to those involved in these criminal networks.

She concluded by thanking members of the FSIN and Witchekan Lake for their support in the police investigation and said RCMP are taking meaningful action towards reconciliation with the Indigenous people they serve.

The officers in attendance were presented with gifts from Witchekan Lake which included handmade blankets which were draped over each of them by members of the First Nation.

The case of the drug and weapons seizure is still before the courts and two of the accused have pending court dates next month.