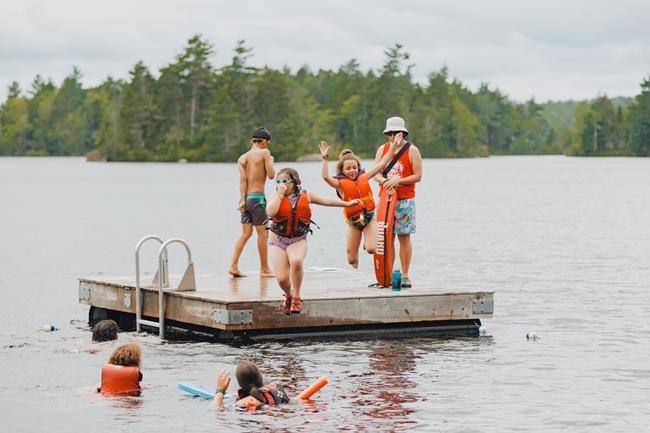 HALIFAX — When Meaghan Belanger’s mother informed her about a Nova Scotia camp for children in grief, the teenager’s initial reaction was unenthusiastic as she feared it would be too teary and dull.

HALIFAX — When Meaghan Belanger’s mother informed her about a Nova Scotia camp for children in grief, the teenager’s initial reaction was unenthusiastic as she feared it would be too teary and dull.

Instead, she found herself immersed in unabashed fun — ranging from a delicious dinner to meeting new friends — during her first day at Brigadoon Village in the summer of 2019.

“Five minutes after my Mom left I realized, ‘This is going to be great,'” the teen said in an interview Saturday. She was 14 when she attended the camp in Aylesford, N.S., and is now 17.

Her mother, Janette Belanger, said she initially struggled to find her children Meaghan, Sean and Sarah  help with bereavement after her husband, Gilles Belanger, died from a rare form of cancer in the fall of 2018.

A doctor told her about Brigadoon’s pioneering camp for children with chronic illnesses in 2011, noting it had steadily expanded into bereavement and mental wellness programs over the past decade.

Janette recalled her oldest daughter’s grief had “built a wall around her heart” that the camp experience “chipped away at” as she settled in among peers living through similar emotions and began opening up about her feelings.

“She came home a very different girl,” Janette Belanger said, recalling the contrast between the child she dropped off amid objections to attending in the first place and the daughter who greeted her with a hug a week later as she bid emotional goodbyes to new friends.

“A week of camp that was stress free and that was fun all day gave me an opportunity to grow, I’d say,” Meaghan Belanger said.

The expanding programming that the Belangers have taken advantage of is part of the camp’s more general growth, even in the midst of the COVID-19 pandemic.

David Graham, Brigadoon’s chief executive, announced a $12.5-million expansion on Saturday that includes a new arts building, an outdoor nutrition facility and other additions that will permit up to 300 more campers to attend Brigadoon this summer. It was carried out in the thick of the pandemic while most of its programs were put on hold.

The non-profit camp — the largest of its kind in Canada — relies on fundraising for about two thirds of its $2.5-million operating budget, according to Graham. It’s gone from about 30 campers in its first summer in 2011 to a capacity for about 3,500 campers a year.

“Each week is dedicated to a different group of children with a different diagnosis. Our blind and visual impairment week is going to look considerably different than the week for children who just had heart surgery,” said Graham.

But Graham said the common thread is a long-held philosophy that breaking down isolation is a key way forward for many young people.

“When you arrive at Brigadoon and there are 60 or 70 children having that similar thread of experience, you see you’re not as alone as you thought you were in what you’re going through,” he said.

Graham said the mental health component has become a growing focus of the camp’s programming, in part because it’s now recognized that depression and anxiety are the largest secondary illnesses children will experience alongside their chronic health conditions.

“We’re becoming more aware of the tremendous mental health impacts going on within society today within children. Take the pandemic and add in a chronic illness or the loss of a loved one, and you have a pretty potent cocktail there,” he added.

Simone Sewell, a leadership co-ordinator and former counsellor in the grief program, said children often come to camp without having time at home to begin the grieving process.

“They’re practically mini-adults because of all the stress they’ve gone through … One of the magical things about camp is we give them the opportunity to just be kids,” she said.

She says the approach is to immerse the children in typical, camping activities — including art workshops, outdoor games and swimming — while including daily times to share their emotions with trained counsellors.

On the final day, jars created in art classes have a candle placed inside and are used to line a pathway to a cairn in the woods. The children walk that pathway together, and leave small stones in memory of their lost loved ones at the secret site.

Sewell said the simple ritual often creates a lasting bond among the campers.

“I think getting away from home is a big component of why it works so well,” she said.. “At Brigadoon the kids are in nature, they’re in a cabin with people who’ve had similar experiences to them.”

Meaghan Belanger says she wants to return to reconnect with friends, learn leadership skills and keep on having a good time.

“It’s a chance to be a kid. I don’t have to worry about anything,” she said.

This report by The Canadian Press was first published June 12, 2022.