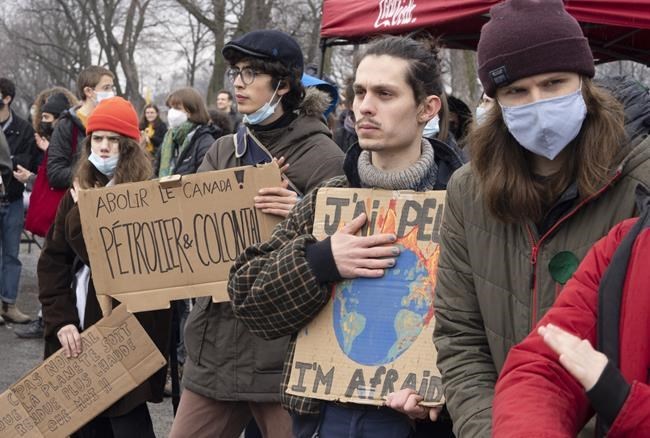 MONTREAL — Protesters gathered in cities across Canada on Friday to denounce government inaction on fighting climate change as part of a series of worldwide environmental protests.

MONTREAL — Protesters gathered in cities across Canada on Friday to denounce government inaction on fighting climate change as part of a series of worldwide environmental protests.

The events were part of the Fridays for Future movement that is inspired by Swedish activist Greta Thunberg.

In Montreal, activists unfurled a red and yellow banner reading “Land Back” across the statue at the base of Mount Royal ahead of what was billed as a teach-in on decolonization and Indigenous sovereignty.

As a light rain fell, 21-year-old Ryder Cote-Nottaway, a member of the Kitigan Zibi Anishinabeg First Nation, urged those present to protect the Earth for future generations.

“In my territory, you see a lot of forestry, clear-cutting,” he said in an interview on the sidelines. “The animals, they’re going away. The rivers and waters are being polluted.”

Dozens of other events were planned in cities across Canada, including Ottawa, Quebec City, Calgary and Vancouver. Other climate demonstrations were held around the world, including some 300 in Germany alone.

Attendees of the Canadian protests were there to denounce the role of colonialism and capitalism in contributing to climate change, but also more local issues, such as a $6-billion highway expansion in Ontario and the Quebec government’s decision to fence in threatened caribou herds.

In Montreal, the crowd skewed young and included many students, including 19-year-old Juliana Saroop. The Dawson College student said that at times she feels “overwhelmed and paralyzed” in the face of the climate crisis, but seeing the global protests makes her feel a little more hopeful.

“There’s a big difference in individual and global change, and right now we’re trying to fight for a bigger change,” Saroop said.

In Ottawa, protesters sported signs that read “Don’t be a fossil fool” and “Every decision matters now.” Dozens turned out to support the climate protest, including a person dressed in an oversized green dinosaur costume who posed for photos while bearing a sign that read “Don’t choose extinction.”

Protester Linda McCourt said she would like to see the government speed up on investing in the renewable energy sector.

“We should have done that already,” she said.

Organizer Sarah Scott said she was taking part in the climate strike because she is disappointed with actions that different levels of government have taken on climate change. She said she is also concerned with the effect the Russian invasion of Ukraine is having on the climate through subsidies for the oil markets.

In British Columbia, about 150 protesters gathered at the Vancouver Art Gallery and then marched a few blocks to a branch of the Royal Bank of Canada.

The group alleges RBC is one of Canada’s largest fossil fuel funders. Organizer Naisha Khan said protesters are calling on the bank to divest from fossil fuels.

“Banks and financial institutions have a very large role to play in funding the climate crisis,” Khan said in an interview.

“We are using the opportunity today, with the theme of ‘people not profit,’ to hold banks, specifically RBC, accountable for their role in funding climate chaos.”

RBC said in a statement that it “believes climate change is one of the world’s most pressing issues” and it is working with governments, its clients and other stakeholders to reduce carbon emissions in line with global targets for financial institutions.

“They are an essential bridge as we transition to, and the world develops, more sustainable sources of energy and builds the necessary infrastructure to support a greener future.”

This report by The Canadian Press was first published March 25, 2022.

— With files from Erika Ibrahim in Ottawa, Brieanna Charlebois in Vancouver and The Associated Press.