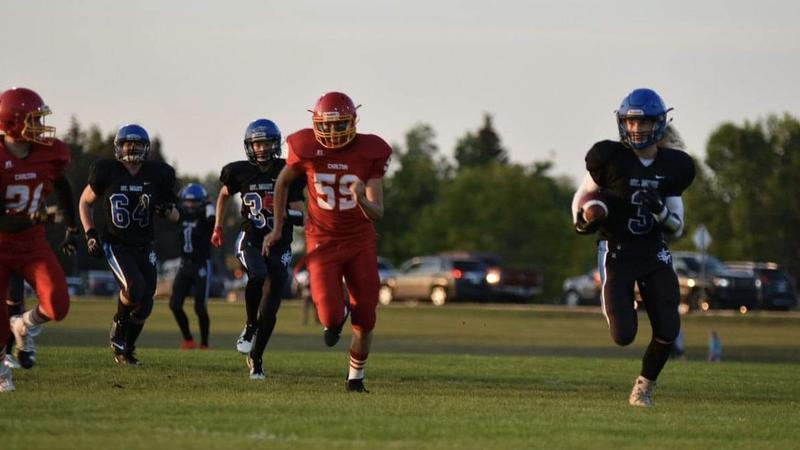 St. Mary quarterback Liam Martin rushed for 18 yards on six carries and passed for 59 yards and one touchdown on two of six attempts.

Marauder running-back Tyson Prokopetz rushed for 72 yards and one touchdown on seven carries.

Both schools are back in action next week in Prince Albert.

A one-sided first half led to a blowout lead in favour of the Crusaders.

Despite winning the coin toss, St. Mary optioned to kick to Carlton who wasted no time getting on the scoreboard. A short three minutes and four plays later and Carlton found themselves up 7-0.

No mercy was the first-half mindset of the red and gold, adding another 22 points before halftime thanks to several highlight reel efforts from Tristan O’Connell and Jordan Umukunzi to set up Sullivan Smith-Windsor for multiple rushing touchdowns. The Crusaders led the Marauders 29-0 at the half.

To the start of the second half and Carlton kept the pedal down. The Crusaders wasted no time upping the score, adding three more touchdowns before the end of third quarter making it a 51-0 game.

Unlike most of the game, St. Mary finally got the ball rolling in the fourth quarter. The Marauders scored their two touchdowns with one being on a passing play and the other on a rushing play to make the score a bit more respectable.

But the late push ultimately fell way short as the St. Mary Marauders were throttled by the Carlton Crusaders, 51-14.

Next up for Carlton is a home game on Friday Sept. 23 versus the Walter Murray Marauders. For the St. Mary Marauders, they’re also at home and will welcome the Holy Cross Crusaders to town on Sept. 22.