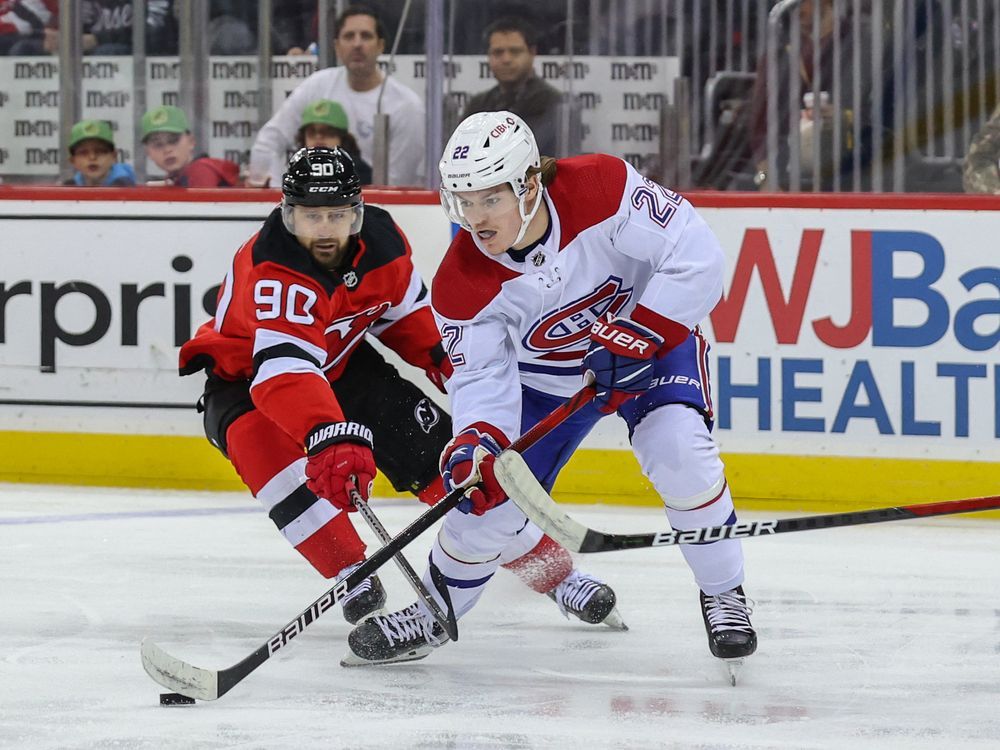 Yegor Sharangovich scored in the seventh round of a shootout to give the New Jerseys Devils a 3-2 win over the Canadiens on Sunday at the Prudential Center in Newark.

The wild shootout that produced seven goals followed a wild overtime period in which the Canadiens’ Mike Hoffman and the Devils’ Nico Hischier and Jesper Bratt hit posts.

The Canadiens pulled goaltender Sam Montembeault and Rem Pitlick scored with 36 seconds to tie the game at 2-2. Christian Dvorak won a faceoff in the offensive zone and, after Cole Caufield got a shot to the net, Dvorak was front to make a blind back pass to set up Pitlick.

This was the second game in a back-to-back situation for the Canadiens, who defeated the Toronto Maple Leafs 4-2 Saturday at the Bell Centre. Paul Byron scored with 2:28 remaining in regulation time to snap a 2-2 tie and Jake Allen made a career-high 49 saves as Montreal boosted its season record against Toronto to 2-0.

Montembeault, who was making his first start since March 15, looked sharp in the first period as New Jersey outshot Montreal 12-6, but he made a major mistake that allowed Jack Hughes to provide the Devils with a 1-0 lead. The goaltender, who had stopped Hughes on two shots in close, appeared to change his mind as he attempted to clear the puck and put a backhand pass on Hughes’ stick at the top of the faceoff circle. Hughes took a few strides toward the net and beat Montembeault with a shot to the top corner on the glove side.

The special teams played a role in the second period as the teams exchanged goals. Hughes scored his second goal on a power play at 14:16. The Canadiens were unable to clear the puck and fatigue was a factor as Hughes connected with five seconds remaining in the penalty. Hughes hit a post earlier in the power play.

Montreal was handed a two-man advantage for 56 seconds later in the period.

The Canadiens failed to get a shot while playing  5-on-3, but they looked better on the second penalty. Nico Daws had to make three saves, including two on Nick Suzuki, who was his junior teammate in Guelph. The second penalty to Jonas Siegenthaler was ending as Josh Anderson tipped a shot from Jesse Ylonen to cut the Devils’ lead to one.

The Canadiens went 0-for-5 on the power play with 10 shots on goal. New Jersey was 1-for-2 with the extra man and had two shots.

After  a slow start, the Canadiens outshot the Devils 33-32, but they had trouble beating Daws, a native of Germany who grew up in Ontario. This was only the third time in the past 18 games the Canadiens failed to score at least three goals.

Montreal went on the road without forwards Tyler Pitlick and Michael Pezzetta, who suffered upper-body injuries Saturday and remained in Montreal for evaluation and treatment. Ylonen was recalled from the Laval Rocket and he joined Mathieu Perreault in the lineup.

There was also a change on defence as Justin Barron made his Canadiens debut. Barron, who was acquired from Colorado in the Artturi Lehkonen trade, replaced William Lagesson, who played his first game for Montreal on Saturday.

This was the first of four road games for the Canadiens, who will play the Florida Panthers on Tuesday. They are in Carolina on Thursday and head back to the Sunshine State for a Saturday game against the Tampa Bay Lightning.