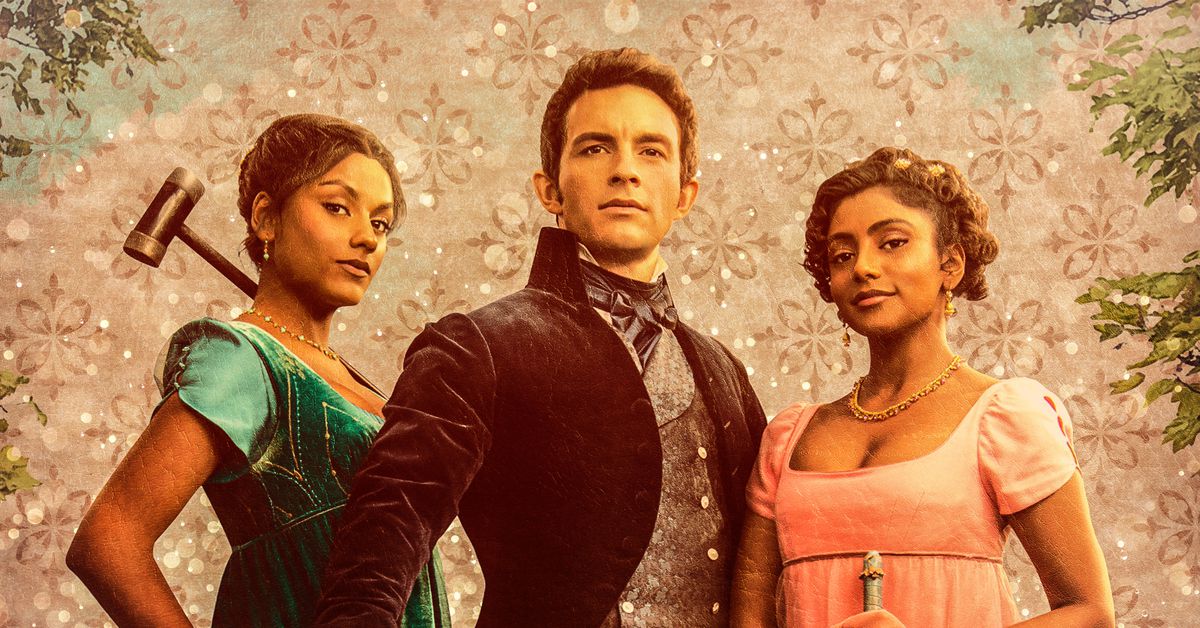 Bridgerton tries to have it both ways. From the start, the Netflix series has strived to preserve the appeal of the period romance while updating the genre for the present day. It’s a double act defined by the show’s soundtrack: contemporary pop hits, covered with classical instruments by the Vitamin String Quartet.

In its first season, a smash success that trails only Squid Game on the list of its streamer’s most popular series to date, Bridgerton mostly nailed the balance. Led by creator Chris Van Dusen and executive producer Shonda Rhimes, the creative team kept the premise of Julia Quinn’s namesake novels intact. But the show made two major additions to the basic concept of an anonymous gossip tracking the exploits of Regency-era high society. The first concerned casting, diversifying its ensemble to include heartthrobs of color among its would-be Mr. Darcys. The second came down to sex, the quantity and quality of which would make any actual 1800s nobleman go red in the cheeks.

There’s inherent tension in Bridgerton’s synthesis of liberal norms and conservative setting, escapist fantasy and material realities. Race, for example, is acknowledged—but only fleetingly, and in a way that suggests prejudice could be overcome by the power of romantic love. The show’s Queen Charlotte (Golda Rosheuvel) is Black, playing on some real-life historians’ theory that the German princess had African ancestry by way of her Portuguese ancestors. By marrying George III, in this telling a harmless old man in lieu of a colonial despot, Charlotte single-handedly integrated the entire English gentry. Somehow, the aristocracy and all other forms of social inequality survived otherwise unscathed. Bridgerton takes place in a world with racial pluralism but—somehow, despite its explicit mention of slavery—no racial tension, and in a world where one social revolution has failed to inspire any others.

As for intimacy, the courtship between Daphne Bridgerton (Phoebe Dynevor) and the Duke of Hastings (Regé-Jean Page) did get hot and heavy—but only after they tied the knot. Once safely ensconced within a socially approved institution, the newlyweds were free to get it on atop various pieces of expensive furniture. The main conflict in their marriage was almost shockingly graphic, centering on the Duke’s refusal to ejaculate inside his wife to avoid conceiving a child. But he got away with it at first only because Daphne was so ignorant of the birds and the bees that she didn’t realize her husband’s actions were preventing a pregnancy. Blissful naivete and carnal knowledge achieved a delicate harmony, letting Bridgerton have its marriage plots and pornographic detail, too.

In Season 2, released last Friday, Bridgerton turns its focus to Daphne’s older brother Anthony (Jonathan Bailey), the firstborn son and keeper of the family name. Last time around, Anthony lived firmly on the libertine side of Bridgerton’s binary split, carrying on a casual relationship with an opera singer and costarring in the show’s very first sex scene. (Arriving not five minutes into the pilot, it involved a tree and Bailey’s bare ass.) Yet the newest episodes find Anthony sincerely committed to the project of matrimony, dedicating himself to finding a bride through the orthodox rituals of courtship—and without any, shall we say, extracurricular activities.

Anthony’s pivot echoes that of the show. For its follow-up, Bridgerton is largely done with walking the line between straightforward romance and steamy, modern update. Over eight episodes, Season 2 goes all in on the former, switching from explicit excess to relative restraint. It’s a choice that comes with some advantages, though they may be outweighed by drawbacks—namely messing with the formula that made Bridgerton such a juggernaut in the first place.

To be fair, Bridgerton doesn’t abandon all of its calling cards. Anthony’s love interests (plural!) are the Sharma sisters, freshly arrived from India to find the young, sweet Edwina (Charithra Chandran) a match. Designated as the Queen’s latest “diamond,” Edwina seems to be an ideal partner for an eligible viscount on the hunt for a wife. But Anthony also finds himself drawn to Edwina’s older sister Kate (Simone Ashley), an intense attachment that starts as mutual dislike and grows into something more. What good romance could do without an enemies-to-lovers plot?

The Sharmas, at least, are entirely of a piece with Bridgerton’s revisionist reputation. As a costume drama set in 19th-century England, it’s almost surprising Bridgerton didn’t start its efforts at representative casting with South Asian protagonists. Given the long legacy of British imperialism, there’s plenty of historical precedent to draw on. With that history comes cultural specificity, widening the range of traditions on display. At one point, Kate and Edwina partake in a haldi ceremony, a custom that easily takes its place alongside the ton’s quadrilles and promenades.

Bridgerton’s new heroines prove it’s still not (quite) your mother’s bodice-ripper. But the latest season is still far closer to it than its predecessor—a shift symbolized by the conspicuous absence of Page, who turned down an offer to return due to scheduling conflicts. (His former scene partner Dynevor makes a handful of appearances as a kind of elder stateswoman, counseling her brother with the hard-won wisdom of married life.) At first, Bridgerton toyed with the pacing and rhythm of traditional romantic arcs, moving up the wedding to the season’s midpoint to get to the good stuff that follows, both emotional and eye-poppingly physical. In Season 2, Van Dusen and his writers slam the brakes. Anthony and Kate don’t so much as make out until the final moments of Episode 6. Until then, it’s all tortured glances and heavy sighs, the stuff of which proper courtships are made. And the wedding comes after the two parties come to a mutual understanding, not a moment before.

There are reasons beyond propriety that romance typically trades in such delayed gratification, a rule Bridgerton was once an exception to and now follows to the letter. The truth is that it’s rarely as hot to witness a relationship’s consummation as it is to anticipate it. That’s why romance has thrived as literature with no visual component to speak of, allowing viewers to use their imaginations and actively participate in the illusion. In my review of Season 1, I described the adaptation of Quinn’s novels as “sexy without quite being erotic.” If anything, Season 2 is the reverse. There’s not a lot of sex, but in the crackling chemistry and relentless self-denial that defines Anthony and Kate’s dynamic, there’s plenty of eroticism.

That’s in part because Anthony and Kate feel more developed, both as individuals and a pair, than Daphne and the Duke ever did. Anthony is still haunted by his father’s sudden death a decade before, forcing him to assume the family’s title and responsibilities before he was truly ready. Kate, for her part, has lived her entire life trying to secure Edwina’s happiness, rarely pausing to think of herself or what might happen when the siblings’ interests could be at odds. In Kate and Anthony’s relentless focus on family and their obsession with self-martyrdom, the two are so alike their initial antipathy is a classic case of the Spider-Man meme, if Peter Parker wore a waistcoat. Naturally, everyone can see it but them.

The problem is that Kate and Anthony’s inevitable coupling gets drawn out over eight full hours, not a two-hour film or a page-turner you can blaze through in an afternoon. (Several episodes even push past the 60-minute mark; between this and Inventing Anna, Shondaland’s Netflix era has gone all in on streaming bloat.) Meanwhile, the subplots intended to hold us over while the central romance unfolds don’t hold our attention to the same degree. Benedict Bridgerton (Luke Thompson) goes to art school, like many a rich failson before him; Penelope Featherington (Nicola Coughlan), now unmasked as Lady Whistledown, does her level best to stay ahead of the sleuths on her trail, including the Queen and her best friend Eloise Bridgerton (Claudia Jessie). As sideshows, they’re just fine; as distractions, they’re insufficient.

Where fans land on Season 2 will come down to the larger intention, not execution. After more than a year away, Bridgerton is a fundamentally different beast, as might be expected for a series with an anthology-esque structure. No matter what, change is in the cards for Season 3, and not just in front of the camera; Van Dusen has departed the show, and will be succeeded as showrunner by Jess Brownell. A prequel and spinoff about a young Queen Charlotte is also in the works, turning Bridgerton into a bona fide franchise. But to replicate a show’s appeal, one must first understand it, and the first two seasons of Bridgerton take nearly opposite routes to their mutual destination. Bridgerton Season 2 stops splitting the difference between classicism and revisionism, making a definitive choice between the two. The open question is whether audiences will agree with it.