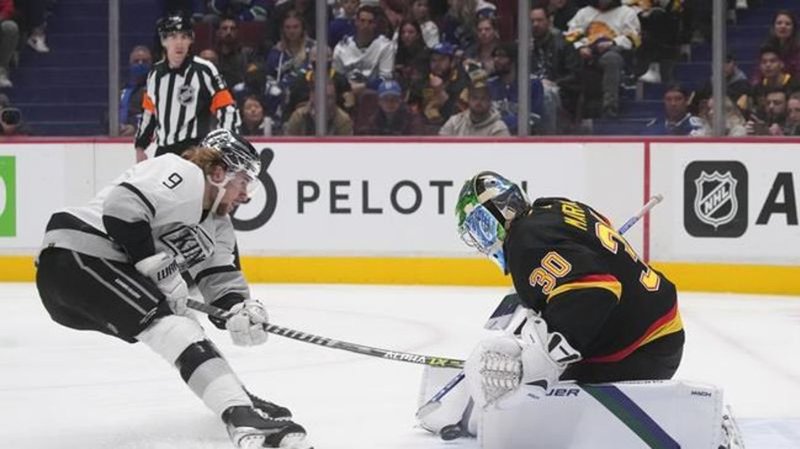 The Canucks will close out their season Friday when they take on the Oilers in Edmonton.

The Kings will face the Oilers in the first round of the playoffs, with the schedule yet to be announced.

Vancouver pressed in the dying seconds of overtime, throwing several shots at Petersen before Boeser took a rebound at the top of the crease and fired it in for his 23rd goal of the season.

Martin made a pair of dazzling saves about two minutes into overtime, first stymying Blake Lizotte on a two-on-one, then scooping up a backhanded shot from Andreas Anthanasiou just moments later.

Vancouver came into the third period down 2-0 but refused to relent.

Chiasson put away the equalizer 14:31 into the final frame, backhanding in a bouncing rebound from a Quinn Hughes shot. The puck appeared to hit the stick of L.A. defenceman Troy Stecher before sailing up and over Petersen into the back of the net.

A power-play goal finally got the Canucks on the board after Carl Grundstrom was called for hooking midway through the third.

Boeser fired a one-timer from the top of the slot 6:52 into the frame, cutting the deficit to 2-1. Elias Pettersson registered an assist on the play for his 67th point of the season, a new career high.

The Kings took a 2-0 lead late in the second after Kempe beat defenceman Travis Dermott in a foot race to the Vancouver net and slid a shot under Martin’s pad.

The goal was Kempe’s 35th of the season.

Elias Pettersson and Boeser sprinted into the L.A. zone with Pettersson controlling the puck. He slipped a pass to Boeser across the slot and the right-winger unleashed a quick wrist shot from in tight. Petersen dove across the crease and got his blocker in the puck’s path just in time.

Vilardi opened the scoring 15:08 into the second with a shot from above the faceoff circle that sailed through traffic and beat Martin on his glove side.

L.A. dominated the game even before finding the back of the net, outshooting the home side 23-8 halfway through the second period.

Martin kept Vancouver in the game with a series of solid saves, even after he lost his stick for an extended period. The lumber was knocked out of his hand midway through the second when a blast from Athanasiou went off the shaft, sending the stick flying into the corner.

The Canucks goalie also weathered six minutes of penalty time in the first.

L.A. was 0-for-4 with the man advantage Thursday while Vancouver went 1-for-2.

NOTES: The Canucks announced their team awards Thursday, with MVP honours going to all-star goalie Thatcher Demko. Demko missed a second game with an undisclosed injury … Kings forward Dustin Brown wore the ‘C’ usually reserved for Adrian Kempe after announcing earlier on Thursday that he will retire at the end of L.A.’s playoff run.