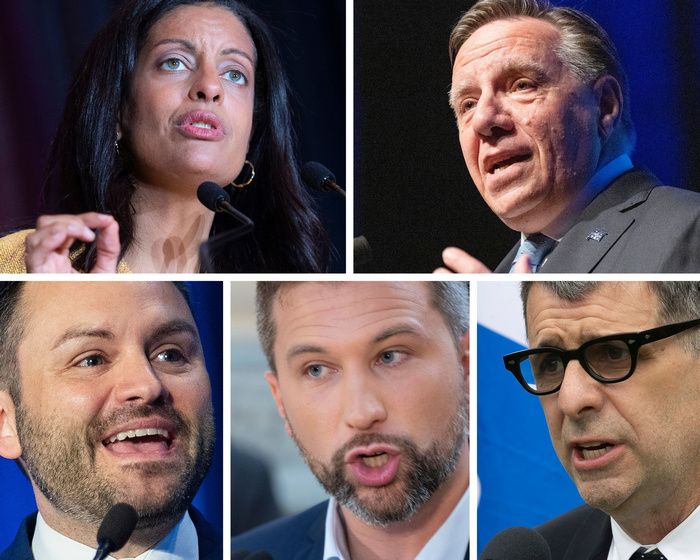 François Legault managed to keep his cool, Dominique Anglade may have made inroads in the business of becoming known to Quebecers, and Éric Duhaime came under intense fire for tapping into anger over COVID-19 health measures.

In a heated and fast-paced debate Thursday — one that was marred at least at the start by everyone speaking at the same time — Quebec’s five main political leaders traded barbs for just over two hours at what is now the midway point of the election.

None of the five leaders dropped the ball in such a way as their campaigns will find themselves in trouble, but it’s unclear if anyone got a real boost off the exercise, which was sponsored by the TVA network.

That is a particular problem because the four opposition parties — Liberals, Québec solidaire, Conservative Party and Parti Québécois — have yet to find the right formula to drive up opposition to the ruling Coalition Avenir Québec, which still has a big lead in the polls.

As many predicted, Legault, the incumbent premier and leader of the CAQ, was on the defensive — on his left and right flank — much of the evening, but that was expected given his four years in office including the controversial time managing the COVID-19 pandemic. Arriving for the debate, he conceded to reporters that he was stressed.

But while the leaders tried to push his buttons, he controlled his temper, appearing to be at his best trash-talking Duhaime, who has tapped into anger over health measures.

“I didn’t go into politics to close stores and impose masks,” Legault said in blasting Duhaime, leader of the Conservative Party of Quebec. “I did this to save lives. You shot a hole in the rowboat. It was irresponsible.”

Legault was asked after the debate why he was not more combative. Some analysts said his performance was adequate but not flashy.

“With five people, this debate was not a simple matter,” Legault told reporters later.

On the other hand, he had some odd remarks. In a short discussion on the issue of systemic racism — which Legault does not recognize — he insisted the problem at the Joliette hospital had been solved.

And in an exchange with Liberal Leader Anglade, Legault said her party “has lost the monopoly over being opposed to sovereignty,” and that explains its lacklustre standing with Quebecers.

“The Liberal Party does not have a reason to exist anymore,” Legault said later answering a question from the Montreal Gazette.

He also appeared to relish honing in on Québec solidaire co-spokesperson Gabriel Nadeau-Dubois, who at times seemed taken aback by Legault’s attacks, particularly against the QS plan to take the ultra-rich and slap new tariffs on gas-burning SUVs.

Nadeau-Dubois, however, was quick on his feet, taking on Duhaime’s plan to bring back oil development in Quebec. His best line was saying maybe Duhaime would be more comfortable running for Texas governor.

“I will never insult you and suggest that you run in Cuba,” Duhaime fired back.

Duhaime, however, gave no quarter, attacking Legault over the health measures and Anglade over her party’s handling of Bill 96 overhauling the Charter of the French Language.

He made the unusual move of switching to English, in the middle of an all-French debate.

“You betrayed English-Quebecers on that bill,” Duhaime shot at Anglade, who later brushed the remark aside saying Duhaime changes his view on Bill 96 every hour.

Paul St-Pierre Plamondon, the leader of the Parti Québécois, was remarkably poised and calm in his first big debate and needled Legault for not going further to protect French. He called Bill 96 “a half measure.”

“You failed to protect French,” St-Pierre Plamondon said at one point.

It was the first time in Quebec history that there were five candidates opposing each other in a debate. Sometimes turning points in campaign but not always, for some Quebecers it is the first time they see a leader close up and under pressure.

With 34 per cent of Quebecers saying they could change their vote as a result of what they saw in the debate, that made the stakes high because there is less time left to make a good impression on the undecideds.

Different people take away different things from debates. It is only really in subsequent polls that you really get a feel on whether it helped or hindered a candidate.

While a Léger poll Thursday shows the CAQ is holding on to its lead and seems destined to win the election, various regional races have become heated including the one in Montreal. With the poll showing the CAQ going nowhere in Montreal, a ferocious battle is underway between the Liberals and QS.

On the other hand, the Liberals are in trouble in the Laval region, where they currently hold five out of the six regions.

The Conservatives are also in good position in the Quebec City region, particularly in the Beauce and Chaudière-Appalaches regions.

It was the first of two televised leaders’ debates. The next one, sponsored by Radio-Canada, is Thursday, Sept. 22. There had been plans for an English debate — one was held in 2018 — but it was scrapped after two of the parties, the CAQ and PQ, refused to play ball.